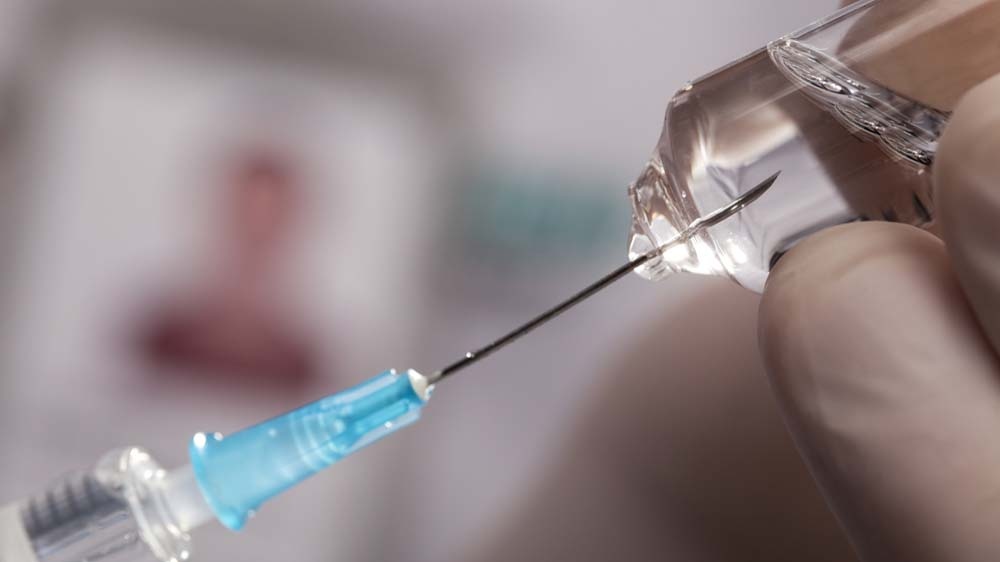 A person fills a needle with a vaccine. (Wallenrock / shutterstock.com)

Whether it’s a young teenager experiencing the first pimples of puberty or a longtime adult sufferer, acne affects nearly everyone at some point in their lives.

In Canada, more than 5.6 million people struggle with acne, which is nearly 20 per cent of the population, according to the Canadian Dermatology Association. For adolescents, the statistics are even higher – approximately 80 per cent of Canadians between the ages of 12 and 24 struggle with the unsightly and sometimes painful skin condition.

Treating acne can be a frustrating endeavour as many options such as topical creams, hormonal birth control, supplements, dietary changes, and antibiotics can be ineffective in the long term and accompanied by unwanted side effects.

That is why a vaccine aimed at preventing and treating acne is being hailed as a promising new weapon in the ongoing battle against the bumps.

Although it’s still in its early stages, the vaccine has the potential to help the hundreds of millions of people who suffer from acne around the world, according to its creators.

Developed by researchers at the University of California, San Diego, and National Central University in Taiwan, the vaccine uses antibodies to target a toxic protein secreted from Propionibacterium acnes (P. acnes) bacteria. The secreted toxin, called the Christie-Atkins-Munch-Petersen (CAMP) factor, causes inflammation that then leads to acne.

Instead of targeting P. acnes bacteria entirely with the vaccine, the scientists have developed antibodies that target the secreted toxin in order to protect the skin’s delicate microbiome, of which P. acnes is a part.

“The vaccine is not going to get rid of this bacteria from your body because we recognize that this bacteria is sometimes good, sometimes bad,” Eric Huang, one of the project’s lead researchers, explained to CTVNews.ca in a telephone call from California last week.

“Instead, after vaccination, our body will produce antibodies to neutralize the toxin secreted from our bacteria.”

During a clinical study this summer, the researchers tested the vaccine on mice and on human skin cell biopsies taken from acne patients. Huang called their findings “very promising” and said they’re already in talks with different companies to procure funding for a large-scale clinical trial on people.

The large-scale clinical trial is required to determine if there are any adverse side effects to the vaccine in humans.

As promising as a vaccine that prevents acne from developing before puberty sounds, dermatologists are cautioning that it may not be a fix-all solution for everyone.

Dr. Paul Cohen, a dermatologist at the Rosedale Dermatology Centre in Toronto, explained that acne is a multifactorial disease – meaning it can be caused by a variety of different factors. He said hormones, genetics, and environmental factors can all play a role in the development of the skin condition.

“I’m not sure what this vaccine can do, especially with women who oftentimes have more of a hormonal cause of their acne. We treat them with birth control pills and other hormonal therapies. Will it address that?” he asked during an interview with CTVNews.ca last week. “They’re attacking the bacteria, which are an important component, but they’re not attacking some of the other causes.”

Cohen also expressed concern that a preventative vaccine might discourage people from taking care of their skin if they no longer have to worry about acne. He said habits such as daily face washing and moisturizing are often created during teenage years and then carried over into adulthood.

“Will patients be able to not care of their skin and still have clear skin? Will people be able to stop washing their face twice a day? Will people stop having to use acne creams? Will people not have to worry about their diet? I doubt it, but it will certainly be interesting to see,” he said.

Cohen said he suspects the vaccine would most likely need to be used in combination with other treatments, such as birth control or medication, to cure all types of acne.

If the vaccine is successful in clinical trials and makes it to market, Cohen said the psychological benefits from this type of treatment could be significant.

“This disease does not kill people but it makes people very depressed and self-conscious. It affects their self-esteem,” he said. “As a dermatologist, I would never, ever underestimate the importance of treating acne and the psychological influence it can have on people.”

The researchers’ findings from the clinical study have been published in the Journal of Investigative Dermatology.