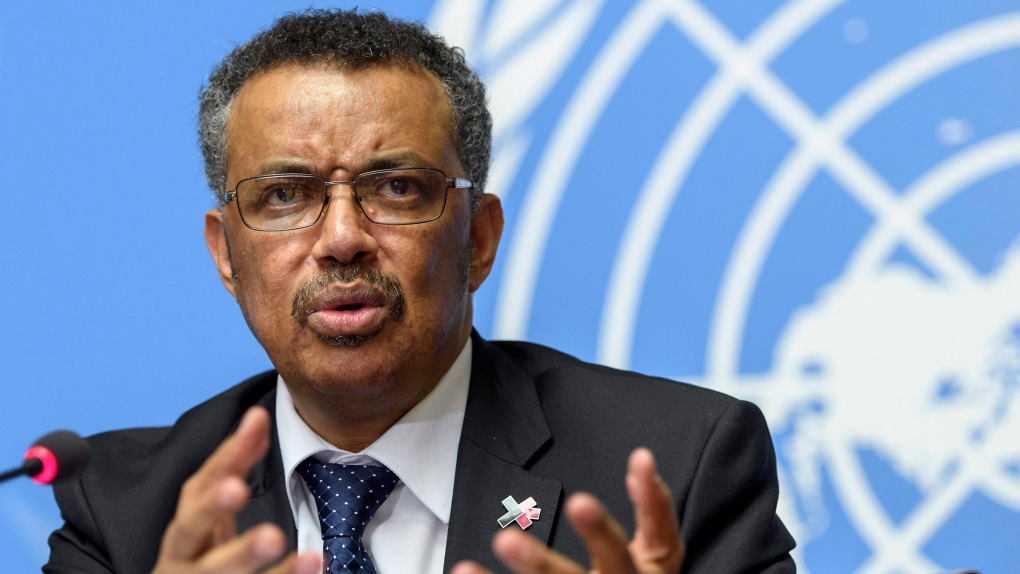 A Wednesday, May 24, 2017 file photo showing Tedros Adhanom Ghebreyesus, director general of the World Health Organization (WHO), answering questions from journalists at the European headquarters of the United Nations in Geneva, Switzerland. (Martial Trezzini/Keystone via AP, File)

LONDON -- The World Health Organization spent nearly US$192 million on travel expenses last year, with staffers sometimes breaking the agency's own rules by travelling in business class, booking expensive last-minute tickets and travelling without the required approvals, according to internal documents obtained by The Associated Press.

The abuses could spook potential donors and partners as the organization begins its week-long annual meeting Monday in Geneva, seeking increased support to fight a devastating outbreak of Ebola in Congo and other deadly diseases including polio , malaria and measles.

The nearly $192 million is down 4% from 2017, when the agency pledged to rein in travel abuses following an AP investigation .

Recent documents show WHO auditors found some WHO staffers were still misrepresenting the reasons for their travel to exploit loopholes in the organization's policies and flying business class, which can be several times more expensive than economy, even though they did not meet the criteria to do so.

In response to questions from the AP, WHO said Monday that "travel is often essential to reaching people in need" and noted that 55% of its travel spending went to bring outside experts and country representatives, often from developing countries, to technical and other meetings.

It added that numerous new measures were adopted in 2018 that aimed to make sure "staff travel is necessary, economical, appropriate and efficient." The agency said there was an overall reduction in the number of business class trips by 49% for non-employees and a drop of 40% for WHO staffers.

"When staff travel, they do a range of things, including responding to emergencies, assessing countries' emergency preparedness, implementing vaccine and other public health campaigns, training health workers and more," the agency said.

But WHO's inability to significantly curb its expenses could undermine its credibility and make it more difficult to raise money to fight health crises, according to Sophie Harman, a global health professor at Queen Mary University in London. She said the problem wasn't so much the amount that WHO was spending on travel, but how it was being used.

"WHO needs to get its own house in order to legitimately go to the international community saying, 'We need more money for Ebola,"' she said.

Among other responsibilities, WHO is the UN agency charged with setting global health guidelines and co-ordinating the response to health emergencies around the world. Its approximately $2 billion annual budget is mainly drawn from the taxpayer-funded contributions from member countries. The U.S. is WHO's biggest contributor.

During this week's World Health Assembly, a yearly gathering of WHO's highest decision-making body, including member states and donors, the agency will be trying to raise more funds for Ebola and other health priorities. The costs of fighting the Ebola epidemic have left it with a funding gap of more than $50 million.

In 2017, the AP reported that WHO was spending roughly $200 million each year on travel, including first-class airplane tickets and five-star hotels for its director-general, Dr. Margaret Chan, which health experts said exposed the agency's misplaced priorities.

Amid such criticism, Chan's successor, Tedros Adhanom Ghebreyesus, promised to take action. In response to AP questions, WHO said Monday that Tedros travels in either business class or economy, depending on the distance, and spent $209,000 on travel in 2018.

"WHO's travel policy prohibits first-class travel for all staff," the agency said, adding that a host of initiatives have helped cut travel costs.

For non-emergency travel, the proportion of business class flights dropped to 18% last year, from 27% the previous year, according to external auditors. Yet other international aid agencies, including Doctors Without Borders and the U.S. Centers for Disease Control and Prevention, explicitly forbid staff from travelling in business class.

While overall spending on travel has fallen at WHO, abuses continue, documents show. In one report provided to the AP, external WHO auditors analyzed 116 randomly selected travel claims that were flagged as "emergency" requests and therefore exempt from stricter UN travel controls. They found proof that in more than half of the claims, the travel was instead for regular duties like attending workshops or speaking engagements.

"We see therefore a culture of non-compliance by staff involved in emergency operations," the report authors said. "Raising a (travel request) as emergency, even if it is not compliant with the criteria for emergency travel, shows a breakdown in controls and results (in a) waste of resources."

WHO's external auditors said when some staffers flew business class even though they didn't meet the UN criteria to do so, they failed to submit paperwork justifying the exception.

"Based on the difference in ticket costs for business class and economy class, savings could have been realized by the organization," the report said, citing more than 500 travel requests last year that may have broken the rules.

In a series of anonymous emails sent to WHO directors last year, a whistleblower alleged there were numerous instances of "senior staff travelling with girlfriends on fabricated missions," including during the 2014 Ebola outbreak in West Africa. One message claimed a senior staffer flew to Australia from Geneva "on a trumped-up trip at WHO expense" that cost the organization 11,000 Swiss francs ($10,889).

In December, Tedros ordered an internal probe into these and other misconduct allegations.

According to WHO's Office of Internal Oversight, 13% of the fraud cases it investigated last year involved alleged problems with travel claims. In one of WHO's regional offices, investigators found a staffer had submitted void boarding passes as evidence of travel, aiming to get "an unauthorized benefit for an estimated amount of $15,202." WHO says the staffer resigned and the agency did not suffer any financial losses in the case.

The WHO auditors' report comes at time of critical financial need for the agency.

WHO emergencies chief Dr. Michael Ryan said this month that WHO's strategy to contain the spiraling Ebola outbreak in Congo, which has killed more than 1,000 people, exceeded $88 million and that the financial demands to fight Ebola were continuing to grow.

"We have received $34 million and have a current, urgent, critical financial gap of $54 million," Ryan said.

Harman said WHO needs to pay more attention to staff needs on the front lines of deadly outbreaks. Health workers, many of them poorly equipped, have been killed in Congo by militants rejecting vaccination efforts and other attempts to prevent or treat Ebola.

"There's a disconnect between the fact that people who are doing safe burials in (Congo) aren't getting paid, yet someone is using WHO's travel budget to fund their business-class ticket," she said.