U.S.-developed 'bionic' eye giving hope to those without sight 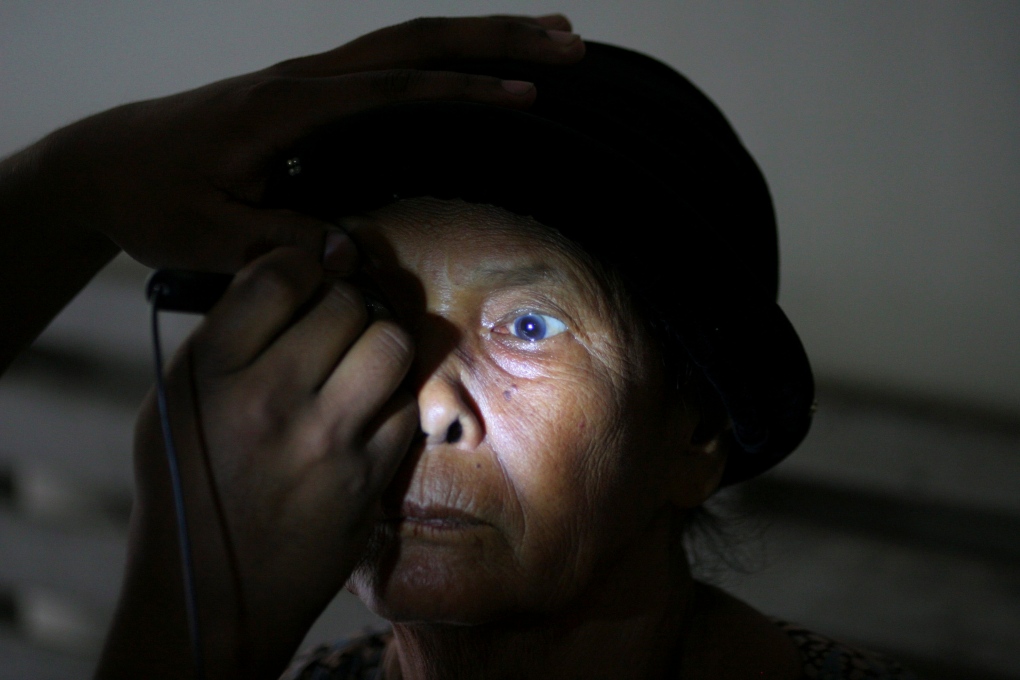 A volunteer examines the eye of a patient prior to her cataract surgery in Indonesia in this November 2012 file photo. (AP Photo/Binsar Bakkara)

After years of research, the first bionic eye has seen the light of day in the United States, giving hope to the blind around the world.

Consisting of 60 electrodes implanted in the retina and glasses fitted with a special mini camera, Argus II has already won the approval of European regulators. The U.S. Food and Drug Administration is soon expected to follow suit, making this bionic eye the world's first to become widely available.

"It's the first bionic eye to go on the market in the world, the first in Europe and the first one in the U.S.," said Brian Mech, the California-based company's vice-president of business development.

Those to benefit from Argus II are people with retinitis pigmentosa, a rare genetic disease, affecting about 100,000 people in the US, that results in the degeneration of the retinal photoreceptors.

The photoreceptor cells convert light into electrochemical impulses that are transmitted to the brain via the optic nerve, where they are decoded into images.

"The way the prosthesis works (is) it replaces the function of the photoreceptors," Mech told AFP.

Thirty people aged 28 to 77 took part in the clinical trial for the product, all of whom were completely blind.

"We had some patients who got just a little bit of benefit and others who could do amazing things like reading newspaper headlines," he said.

In some cases, the subjects could even see in color.

"Mostly they see in black and white, but we have demonstrated more recently we can produce color vision as well," Mech said.

According to Mech, Argus II is already available in several European countries for 73,000 euros ($99,120). A US price has not been set but is likely to be higher, he said.

"Now we are (at) around 60 patients... We have tons of surgeries scheduled, the number is growing almost daily," he said.

Other researchers are also vying to develop bionic eyes of their own, that would offer higher resolution images with more electrodes implanted in the retina.

At the Massachusetts Institute of Technology, a team lead by John Wyatt is working on a system that would have up to 400 electrodes.

Daniel Palanker of California's Stanford University is proposing a different approach based on tiny photovoltaic cells instead of electrodes.

"We're thinking about implanting up to 5,000 of these cells at the back of the eye that would theoretically allow for a resolution that is ten times better," George Goetz, a member of Palanker's team, told AFP. This system would also help individuals who lost their sight due to age-related macular degeneration, he added.

These photovoltaic cells convert light into electrical impulses that stimulate the nerve cells in the retina, which then transmit the signals to the brain.

This system has successfully been tested in rats, and the first clinical trial could begin in a year, probably in France. Palanker is linked with French company Pixium Vision based in Paris.

Grace Shen, of the National Eye Institute that has supported both the Argus and Palanker projects, said work on stem cells and optogenetics were also important areas to focus on in developing treatments or the prevention of blindness. Through optogenetics, retina cells can be genetically modified to render them light-sensitive again.

"I think the bionic eye is something that is going to work in some patients and is not going to work with all patients, but it's an exciting time ahead," said Shen.

"We know it's feasible, it can work, but we still have a long way to go."