Those providing shelter to Ebola-infected patients will be punished: Sierra Leone 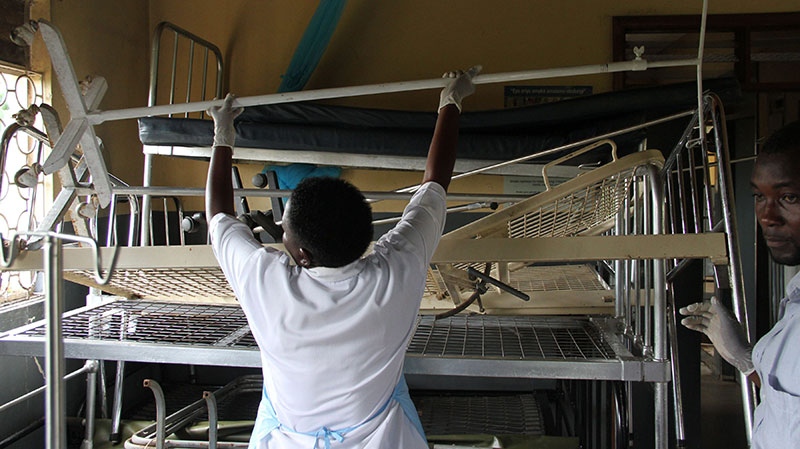 Medical personal stack equipment as they prepare a ward which has been heavily fumigated and re-established as an isolation unit to care for the anticipated impeding victims following a new outbreak of Ebola, Thursday, Nov. 15, 2012, at Nyimbwa Sub County Health Centre. (AP / Rebecca Vassie)

FREETOWN, Sierra Leone -- Sierra Leone warned Friday that it is a serious crime to shelter someone infected with the ebola virus.

The statement from the Health Ministry also lamented the fact that a number of patients had discharged themselves from hospital in Kenema district where the outbreak is taking place and gone into hiding.

According to the World Health Organization, there are 176 people infected with the ebola virus in Sierra Leone and at least 46 fatalities in what is being called the worst outbreak of the deadly disease across three West African countries.

"The Health Ministry wishes the general public to know that any person who obstructs or interferes with the performance of the medical team in any of the ebola observation and treatment centres, would be guilty of an offence and liable to punishment," said the statement, highlighting the challenges faced by those combating the disease in remote areas.

In some villages, health workers have been attacked after rumours spread that it the drugs they dispenses actually caused the disease.

There is no cure for the disease caused by the ebola virus which can rip through a body in just two days, starting with headache and fatigue and progressing through vomiting, diarrhea and massive internal bleeding. More than half of those infected die.

Combating the disease relies on isolating the infected and those they have been in contact with to prevent further transmission through body fluids and direct contact.

The latest figures from the WHO count 635 cases across Guinea, Liberia and Sierra Leone with at least 367 dead.