Researchers at Harvard University say sugary drinks are contributing to an estimated 180,000 deaths around the globe annually, a startling statistic they hope will spur changes in the beverage industry.

The study relied on data obtained from 114 national dietary surveys, representing more than 60 per cent of the world's population. The researchers determined how changes in consumption of sugary drinks affected weight and body mass index, controlling for other factors known to weight, such as changes in physical activity levels and the consumption of other foods and drink.

The researchers linked the overconsumption of sugared beverages to 44,000 deaths annually from heart disease and stroke, 133,000 deaths linked to diabetes and 6,000 cancer deaths worldwide.

“The data is clear,” said Dr. Dariush Mozaffarian, co-director of the cardiovascular epidemiology program at the Harvard School of Public Health. “Too much soda consumption is killing people.”

They found that countries in the Caribbean and Latin America saw the highest death rates from diabetes due too sugary drinks. In the United States, where two-thirds of adults and one in three children are overweight or obese, sugar-sweetened drinks were linked to 25,000 deaths in 2010.

Mozaffarian said the research could motivate policy makers to regulate the beverage industry.

“Our data really provide an impetus for policy makers to make changes when they see tens of thousands of deaths are due to this beverage consumption,” said Gitanjali Singh, of the Harvard School of Public Health.

A debate over super-sized sodas is raging in New York City, where a city-wide ban on the sale of sugary drinks in containers holding more than 16 ounces was to go into effect earlier this month. However, a last-minute ruling by a Supreme Court Justice blocked the ban.

According to a sugar drink fact sheet published by Harvard’s School of Public Heath, a typical 590-millilitre soda contains between 15 to 18 teaspoons of sugar and upwards of 240 calories.

“People who drink this ‘liquid candy’ do not feel as full as if they has eaten the same calories from solid food and do not compensate by eating less,” reads the report.

In the meantime, beverage companies continue to spend billions each year on advertising -- with an estimated half a billion dollars in marketing aimed at children and youth between two and 17 years old.

“In 2010, for example, preschoolers viewed an average of 213 ads for sugary drinks and energy drinks, while children and teens watched an average of 277 and 406 ads, respectively,” reads the report.

Sugary drinks are the number one source of calories in North America and doctors hope more research will prompt consumers and governments to make a change.

“I think we are going to see regulations and legislations put in place,” said Ottawa-based weight loss specialist Dr. Yoni Freedhoff. “Whether it is taxes or cup-size bans, it is not a matter of ‘if’, it’s a matter of ‘when’.”

He continued: “The writing is on the wall, and I think the soda pop industry knows that.”

The Canadian Beverage Association, on the other hand, disputes the findings and suggests there are much bigger problems at the root of rising obesity.

"The Canadian Beverage Association feels that it is over simplistic and naive to believe that one single food or beverage can be held responsible for obesity," the group said in a statement responding to the study. "Obesity is affected by lifestyle, such as diet and physical activity, as well as inherited and social influences, not simply one particular food or beverage."

The study was reported at the American Heart Association's EPI|NPAM 2013 conference (Epidemiology and Prevention/Nutrition, Physical Activity and Metabolism), and has not yet been published. 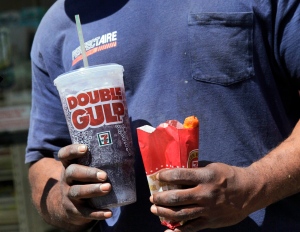