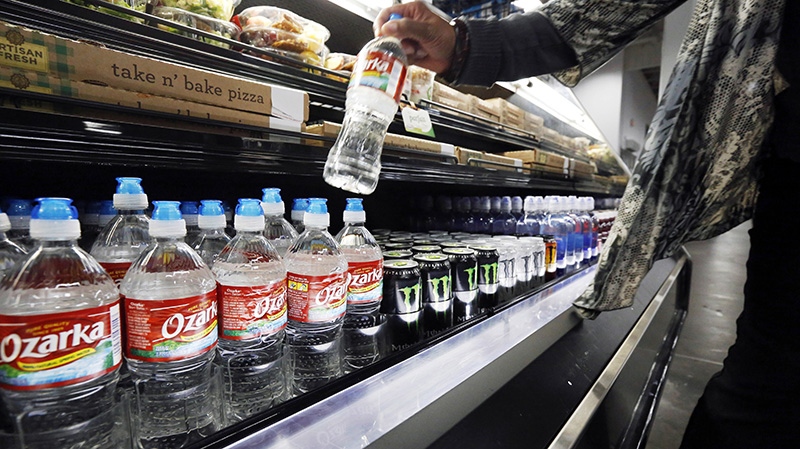 Move over, soda -- the bottled water business is booming

NEW YORK -- It wasn't too long ago that America had a love affair with soda. Now, an old flame has the country's heart.

As New York City grapples with the legality of a ban on the sale of large cups of soda and other sugary drinks at some businesses, one thing is clear: soda's run as the nation's beverage of choice has fizzled.

In its place? A favourite for much of history: Plain old H2O.

For more than two decades, soda was the No. 1 drink in the U.S. with per capita consumption peaking in 1998 at 54 gallons a year, according industry tracker Beverage Digest. Americans drank just 42 gallons a year of water at the time.

But over the years, as soda increasingly came under fire for fueling the nation's rising obesity rates, water quietly rose to knock it off the top spot.

Americans now drink an average of 44 gallons of soda a year, a 17 per cent drop from the peak in 1998. Over the same time, the average amount of water people drink has increased 38 per cent to about 58 gallons a year. Bottled water has led that growth, with consumption nearly doubling to 21 gallons a year.

Stephen Ngo, a civil defence attorney, quit drinking soda a year ago when he started running triathlons, and wanted a healthier way to quench his thirst.

Ngo, 34, has a Brita filter for tap water and also keeps his pantry stocked with cases of bottled water.

"It might just be the placebo effect or marketing, but it tastes crisper," said Ngo, who lives in Miami.

The trend reflects Americans' ever-changing tastes; it wasn't too far back in history that tap water was the top drink.

But in the 1980s, carbonated soft drinks overtook tap as the most popular drink, with Coca-Cola and PepsiCo putting their marketing muscle behind their colas with celebrity endorsements from the likes of pop star Michael Jackson and comedian Bill Cosby.

Americans kept drinking more of the carbonated, sugary drink for about a decade. Then, soda's magic started to fade: Everyone from doctors to health advocates to government officials were blaming soft drinks for making people fat. Consumption started declining after hitting a high in the late 1990s.

At the same time, people started turning to bottled water as an alternative. Its popularity was helped by the emergence of single-serve bottles that were easy to carry around.

Until then, bottled water had mainly been sold in "big jugs and coolers" for people who didn't trust their water supply, said John Sicher, publisher of Beverage Digest.

The new soft drink-like packaging helped fast-track bottled water's growth past milk and beer. In fact, the amount of bottled water Americans drink has risen nearly every year for more than two decades, while the estimates of how much tap water people drink has fluctuated up and down during that time. When taken together, water finally overtook soda in 2008, according to Beverage Digest. (It's difficult to track how much tap water people drink and how much is used for other things like washing dishes, so experts estimate consumption.)

Analysts expect water to hold onto to its top spot for years to come. But whether people will drink from the tap or a bottle is uncertain.

Based on current trajectories, Michael Bellas, the CEO of the industry tracker Beverage Marketing Corp., predicts that bottled water alone could overtake soda within the next decade. That's not counting enhanced and flavoured waters, which are growing quickly but remain a small part of the bottled water industry.

Currently, people drink 21 gallons of bottled water a year. That compares with 37 gallons of other water, which includes tap, sparkling, flavoured and enhanced waters such as Coca-Cola's vitaminwater.

But there are numerous factors that could tilt the scales in favour of tap water.

Because of concerns that plastic bottles create too much waste, experts say bottled water could be hit by a public backlash similar to the one that has whipsawed the soda industry with pushes for bans and taxes.

New York City was preparing for a ban on cups of sugary drinks that are larger than 16 ounces starting on Tuesday. But on Monday -- a day before the ban was to begin -- a judge invalidated the regulation. Mayor Michael Bloomberg, who originally proposed the ban, vowed to appeal the judge's ruling.

Bottled water already is starting to face similar opposition. The town of Concord, Mass. earlier this year banned the sale of water bottles that are less than a litre. And the University of Vermont became the first public university to ban the sale of bottled water last year.

Meanwhile, other cities are waging campaigns to promote tap water. New York City, which touts the high quality of its tap water, offers portable fountains at events around the city.

Although companies such as Coca-Cola Co. and PepsiCo Inc. would rather have people buy bottled waters, they're even more invested in getting people to drink more soda again.

That's because soda and other drinks that the companies make, such as sports drinks and juices, are more profitable than bottled water. With bottled water, people tend to buy whatever is cheapest. That's a habit that forces companies to keep prices relatively low, which eats into profits.

It's why companies are investing so heavily in developing nations such as China and India, where the appetite for soda continues to grow.

It's why Coca-Cola, which holds 13 per cent of the bottled water market compared with PepsiCo's 10 per cent, doesn't seem to think bottled water will ever overtake soda. In an emailed statement, the Atlanta-based company noted that soft drinks remain a far larger category than bottled water and that it sees "upside" for sodas over the next several years.

However, the company added that it saw "great potential" for bottled water. Like its competitors, Coca-Cola said it's focusing on growing its portfolio of bottled waters profitably by offering brands such as Smartwater and its flavoured vitaminwater, which fetch higher prices.

In the meantime, the chairman and former CEO of Nestle Waters North America, Kim Jeffery, is waiting for bottled water's moment in the spotlight. Nestle, the Swiss company that makes Poland Spring, Nestle Pure Life, Deer Park and other brands, has nearly half of the share of the bottled water market.

At a beverage industry conference late last year, Jeffery noted that bottled water is "the elephant in the room."

And given the growing warnings over drinking too many calories -- including from juice, milk and other sugary drinks -- Jeffery said he's confident that water will continue to grow in popularity.

"For thousands of years, water was beverage of choice for human beings," he said. "Now we're reverting back to that."