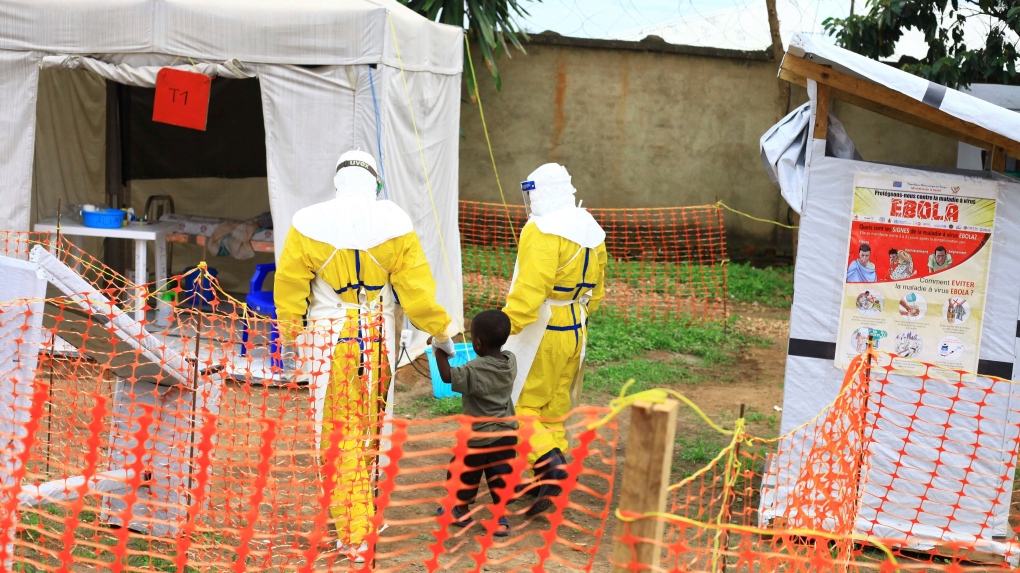 In this Sunday, Sept 9, 2018 file photo, health workers walk with a boy suspected of having the Ebola virus at an Ebola treatment centre in Beni, Eastern Congo. (AP Photo/Al-hadji Kudra Maliro, file)

JOHANNESBURG -- The risk of the deadly Ebola virus spreading from Congo is now "very high" after two confirmed cases were discovered near the Uganda border, the World Health Organization says.

The outbreak of the hemorrhagic fever in northeastern Congo is now larger than the previous one in the northwest and more complicated to contain because of a dense, highly mobile population and a rebel threat so serious that some health workers say they're operating in a war zone.

A deadly attack in Beni, the heart of Ebola containment efforts, forced the work to be suspended for two days earlier in the week.

That led the WHO's emergencies chief, Peter Salama, to warn that insecurity, public defiance about vaccinations and politicians fanning fears ahead of elections in December could create a "perfect storm" leading the outbreak to spread.

This is the first time an Ebola outbreak has occurred in this part of Congo, affecting the provinces of North Kivu and Ituri. Health workers have had to combat various rumours and fears about the disease, which spreads via the body fluids of those infected, including the dead.

Some patients have left health facilities to seek alternative care, WHO said in a statement on Thursday. One infected person moved into a "red zone" where security is poor and carrying out Ebola response efforts is "extremely difficult, if not impossible."

The virus moved near the Uganda border after a woman who had participated in burials of Ebola victims refused a vaccination in Beni and disappeared, local officials have said. She died on Sept. 20 at a hospital in Tshomia on Lake Albert, which separates the countries.

The second confirmed Ebola case in Tshomia was the woman's partner, WHO said.

The UN refugee agency on Friday said it was "gravely concerned" for civilians' safety in North Kivu, which has the highest number of displaced people in Congo with an estimated more than 1 million.

In August about 13,000 people fled their homes in the Beni area alone because of insecurity, the refugee agency said. Meanwhile some 200 refugees from Congo are arriving each day in Uganda, a "tiny fraction" of the everyday flow of traders and others between the countries, it said.

"While substantial progress has been made, the situation is precarious," WHO said of overall Ebola containment efforts. It continues to recommend against any travel restrictions.

Uganda, which has had five Ebola outbreaks since 2000, says it is preparing to begin vaccinations as needed. The health ministry in Congo, which is facing its 10th outbreak, says more than 12,000 people have been vaccinated so far.