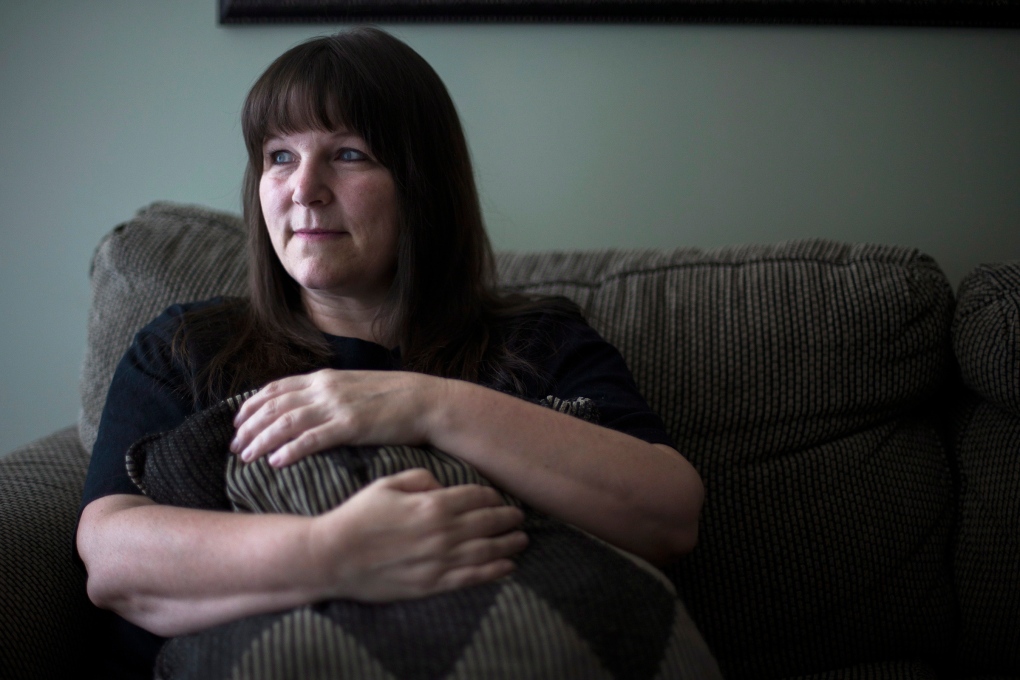 Stacey Yepes poses for a photo in her home in Thornhill, Ont., on Monday, June 16, 2014. (Michelle Siu / THE CANADIAN PRESS)

TORONTO -- It may be the most unusual -- and quick-thinking -- use of a smartphone selfie yet.

When Stacey Yepes lost all feeling on her left side while driving home after running some post-work errands, she grabbed her phone and videotaped herself to show doctors what had been happening to her.

The video shows Yepes describing her symptoms: the left side of her face is drooping and her speech is slurred; she says she cannot move her left arm or leg.

It was not the first time she had experienced such a frightening loss of function.

A day earlier, Yepes had been in her Thornhill, Ont., condo watching TV after work when suddenly she lost feeling in her entire left side and she couldn't lift her limbs.

"And just as that was happening, my phone rang, so I had answered the phone, and my roommate was calling and ... had said, 'Why are you talking funny?"' recalled Yepes, 49.

"And as I'm speaking, I can hear my slurred speech and the feeling inside of my face, all frozen."

Even though the symptoms dissipated in about 10 minutes, Yepes decided to go to the emergency department of a nearby hospital.

"I was scared. I kept thinking as I could hear myself speaking of all the (public service) announcements on the TV," she said. "And I thought, 'Oh, my goodness, this is a stroke."'

But at the hospital, following a round of tests, the doctor told the divorced legal secretary her symptoms were the result of stress, which she should learn to manage more effectively.

As she was leaving the hospital three hours later, Yepes felt the numbness coming back. "And I stood there and I said, 'OK, this isn't stress.' I knew it wasn't, but I thought I had just been diagnosed. What am I going to do?"

The next day, she went to work and was fine all day, until the episode while driving that prompted her to pull over and whip out her smartphone.

Yepes is not sure how she had the cool-headedness to record her symptoms as they were occurring.

"I think it was just to show somebody because I knew it was not stress-related. And I thought if I could show somebody what was happening, they would have a better understanding."

She got herself to Mount Sinai Hospital in downtown Toronto, where an ER doctor said he believed she had been experiencing transient ischemic attacks, or TIAs, which are small but potentially serious strokes.

The physician referred her to the stroke unit at Toronto Western Hospital, where tests confirmed the diagnosis.

"We've never had a patient do this before," Dr. Cheryl Jaigobin said of Yepes' video selfie.

"And I guess for a patient who wanted someone to believe her symptoms were real, it was absolutely incredible," said the stroke neurologist at the hospital's Krembil Neuroscience Centre. "When we saw Stacey's videotape, we were all touched by it and absolutely convinced that her deficits were clearly because of a mini stroke, or a TIA."

Jaigobin says Yepes' mini strokes resulted from a buildup of plaque in her arteries, a condition called atherosclerosis. A blood clot formed on the plaque, then blocked a small artery leading to one side of her brain, resulting in paralysis on the opposite side of her body.

Called an ischemic stroke, it is the most common type of stroke. Warning signs include loss of speech, slurring or an inability to form words; weakness or paralysis on one side of the body; double vision or loss of vision; balance problems; and pronounced dizziness, Jaigobin explained.

The other kind is known as a hemorrhagic stroke and results from bleeding somewhere in the brain; typically, the first warning sign is a sudden-onset headache, she said.

Risk factors for an ischemic stroke such as Yepes experienced include high blood pressure, diabetes and elevated cholesterol; longtime smokers are also at risk.

But not only older people can have a stroke -- they can occur in young adults and even babies.

"Stroke can affect anyone at any age, and in fact studies are showing that younger people are presenting with stroke because things that we usually saw in older age, like high blood pressure and diabetes and high cholesterol, in our modern North American society they tend to occur at a younger age," said Jaigobin.

Anyone who experiences symptoms that might indicate a stroke should immediately call 911 and get to the hospital, she said, noting that ischemic strokes caused by a blocked artery can be treated with the clot-busting drug tPA, which needs to be administered within 4 1/2 hours to be effective. There are also other medications that can help reverse deficits accruing from a stroke and speed recovery in many cases.

Neurologists who specialize in stroke have a saying: "Time is brain," meaning that the earlier the diagnosis is made and treatment started, the "more neurons we're able to save," she said.

Yepes, who has been off work but hopes to return in July, is participating in a stroke rehabilitation program and will continue to be monitored by Toronto Western's TIA and Minor Stroke unit, or TAMS. As well as taking cholesterol-lowering and blood-thinning medications to prevent another mini stroke, she has revamped her lifestyle, eating a healthy diet and exercising daily.

"Thankfully, because I reacted so quickly, I am what they call a high-functioning post-stroke person," said Yepes, who still has lingering effects from the March mini strokes that may resolve over time.

"If I over-exert myself, if I do too much, I do feel weakness or heaviness on my left side. So it's now just an indicator to myself that I need to slow down and take time."

Yepes said the experience was a wakeup call she hopes others will take to heart.

"It's just opened my eyes that you are never too young. I always thought strokes were for older people. I don't know anybody in my age range that has ever had a stroke," she said.

"I would just encourage anybody, if you have these symptoms, or even if you remotely think (you do), go and get it checked out. Don't wait because your greatest chance of recovering is getting it looked at immediately."

As for her video selfie, "everybody is really shocked that I had the presence of mind to take it," she said of the TAMS team. "When Dr. Jaigobin saw it ... she just couldn't believe that I even did that.

"So, of course, they warned me should any symptoms happen again, dial 911 first -- and then do the video."