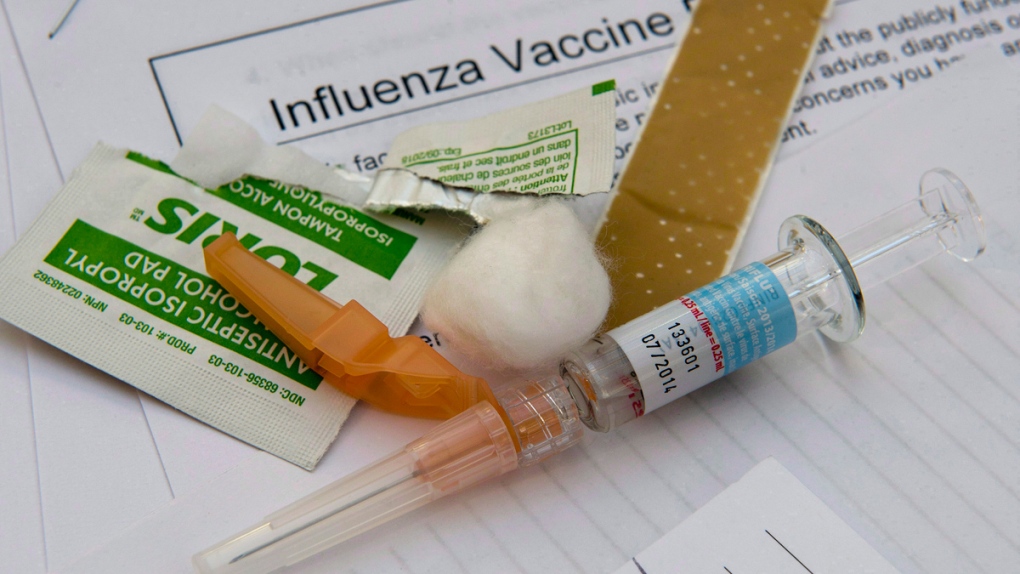 A syringe with the flu vaccine sits ready for use at the annual meeting of the Ontario Hospital Association in Toronto on November 4, 2013. (THE CANADIAN PRESS / Frank Gunn)

It's a requirement at some hospitals in Ontario, which the nurses' union is fighting, that they either get the flu shot or wear a mask. The Ontario Nurses' Association has filed grievances at several hospitals, arguing that the policies pressure nurses on the right to choose whether or not they are immunized.

"Forcing them to have the flu vaccination or wear a surgical mask, there isn't any evidence to show that that is beneficial," said ONA vice-president Vicki McKenna.

"We know that forcing unvaccinated health-care workers to wear the mask is really intended to punish them or out them and making their personal health decision public. People shouldn't have to make their medical information public and that's exactly what this does."

McKenna suggested the surgical mask -- different than the N95 masks that provide better protection against the flu and diseases such as SARS -- may not do anything to lower the risk of influenza transmission.

"Some people might believe the mask if protecting them somehow," she said. "The fact is that it's a false sense of security."

The grievance filed at the Sault Area Hospital is in arbitration now and is being treated as the lead case. The ONA had hoped to have this issue resolved before the start of this flu season, but parts of the country are already reporting early flu activity. McKenna said it may not even be resolved by the end of the year.

It will be important to see the outcome of the grievances, but Ontario has no current plans to implement a provincewide vaccination or mask policy, said Health Minister Eric Hoskins.

"I know that there are a number of hospitals that have chosen to have the mandatory vaccinate-or-mask policy," he said Monday.

"There are a number of hospitals that are able to attain very high rates of vaccination despite not having that policy. So we're very interested as a government to ascertain why those hospital environments have had, on a voluntary basis, great success."

NDP health critic France Gelinas said there should be more leadership on this issue from the health minister.

"This is an issue that has come up since flu shots were first made available," she said. "How come we have to rely on the process that we know to be cumbersome and slow and adversarial to get a health policy? To me, the whole thing is completely backward."

The arbitration process can be slow, Gelinas said, but she believes it will result in a compromise that will take into account the workers' freedom of choice and ensuring everyone who enters a hospital is protected.

Progressive Conservative health critic Christine Elliott said it makes sense to require nurses to get a flu shot or wear a mask.

"I don't think you need to make flu shots mandatory, but I do think that for those nurses who choose not to have the flu shot that it is reasonable to expect that a mask will be worn because of the vulnerability of that patient population," she said.

The Ontario Hospital Association, which is in the arbitration with the ONA, would not comment