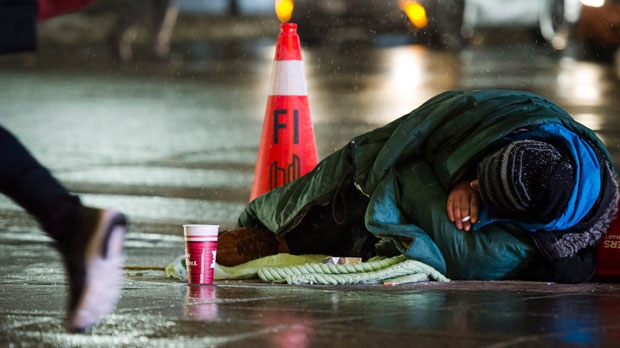 A homeless person is seen in downtown Toronto, on Wednesday, January 3, 2018. (THE CANADIAN PRESS/Christopher Katsarov)

Most Canadians say that, if they had a choice, they would prefer to die at home. But what happens when you don’t have a home?

For thousands of people living on the streets, the reality is they often get no end-of-life care at all, and are much more likely than other Canadians to die alone.

But a new hospice that opens today in Toronto is hoping to change that. The Journey Home Hospice, a partnership involving Inner City Health Associates, Hospice Toronto and Saint Elizabeth Foundation, will offer 10 beds, a warm setting, and professional care to as many as 50 people a year who have nowhere else to go in their dying days.

“When you don’t have a home, you need a caring, warm place,” he told CTV’s Your Morning on Monday.

Dr. Dosani notes that homeless people typically live with poor health and die at a much younger age than the rest of Canadians. The average life expectancy for someone who is homeless ranges between 34 and 47 years old, whereas the rest of us can expect to live to between 77 and 82, on average.

The hospice will help those who are homeless navigate the health care system in their final days – a system that Dosani notes is very much geared for people with a home. Most homeless people don’t have loved ones who can get them to appointments, or help them deal with the side effects of medications. Most don’t have a warm bed to rest after appointments; many don’t even have a phone.

Staff at the Journey Home Hospice will help patients with all those worries, giving them the care they need as well as a dignified death.

Journey Home will be the second facility in Ontario to offer end-of-life care for the homeless, after the Ottawa Mission opened a hospice of its own in 2001. Dosani hopes that, if it is a success, the Ontario government will open more such facilities like his.

“It really begs the questions of what a human life is worth,” he said. “If we live in a society where all of our lives are worth the same, then I think investing in something like Journey Home Hospice makes a lot of sense.”