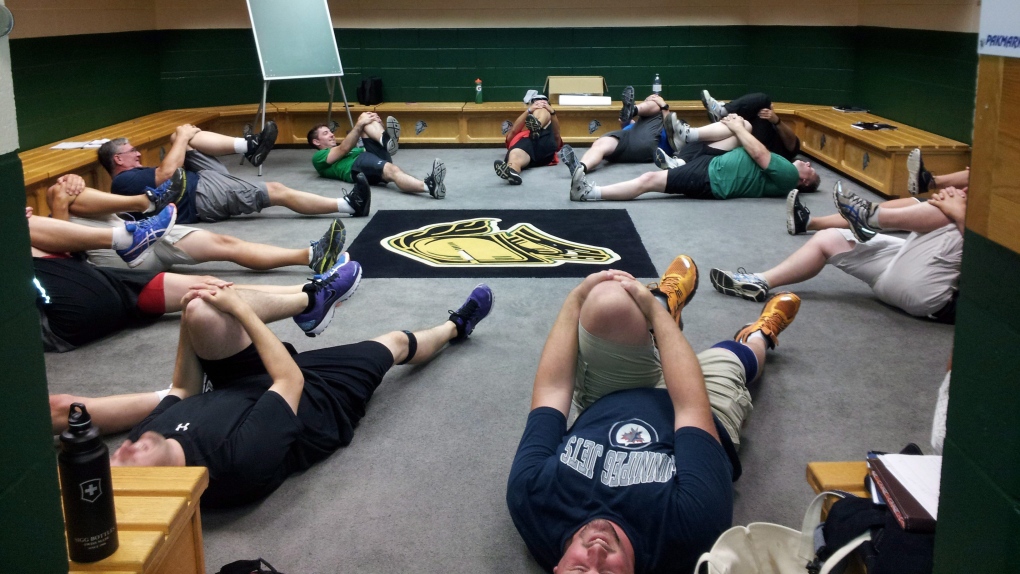 Men participating in the University of Western Ontario's Hockey Fans In Training program, funded by the Movember Foundation, stretch in the London Knights locker room in this undated handout photo. THE CANADIAN PRESS/HO - Hockey Fans in Training

A team of Canadian researchers is recruiting overweight male hockey fans for a new study that aims to turn a passion for sports into healthier lifestyles.

The Hockey Fans in Training Program, piloted at Western University in London, Ont., is being rolled out by researchers at the University of New Brunswick in Fredericton in January.

The 12-week health-and-fitness program uses the social bonds and camaraderie men share watching hockey to help them to get in shape, eat better and lose weight.

"We don't talk about hockey directly in the program but we tailor the topics to male sports fans," said Danielle Bouchard, assistant professor of kinesiology at UNB and leader of the study in New Brunswick.

"It's unusual to have a full session on beer and wings in a fitness program for the general public," she said. "But in this setting, it makes sense to talk about beer and how much it affects health."

About six in 10 Canadian men are classified as overweight or obese, which puts them at higher risk for chronic diseases such as diabetes and cardiovascular disease, Bouchard said.

But most fitness and lifestyle programs are geared to -- or tend to attract -- women.

"My research has always had trouble getting guys involved in the work," said Dr. Rob Petrella, a physician and kinesiology professor at the Western Centre for Public Health and Family Medicine.

"We don't tend to get guys into the clinic until it's too late and they've had a heart attack or a stroke. This is a real problem for us and we were looking at ways to engage and attract men to help create lifestyle changes."

The team of researchers at Western recruited 80 fans of the London Knights and the Sarnia Sting, junior hockey teams with avid fan bases.

The men, all overweight or obese, met weekly for 12 weeks. Each 90-minute session focused on healthy eating, active lifestyles and group exercise training.

Petrella said the first few weeks started with basics, such as getting active and how to buy and cook healthy food, and eventually incorporated more physical exercise.

On average, participants lost about eight-pounds each, better than most commercial weight-loss programs, Petrella said.

Participants were also able to maintain the weight loss over a one-year period, resulting in positive changes in health indicators like lower blood pressure, he said.

For Bouchard at UNB, one of the most promising aspects of the training program is its potential for lasting impact.

"There is always an interest in early January to do something to get in shape with a new year's resolution," she said. "But it usually doesn't last. This gives us a good opportunity to recruit people to the program and hopefully encourage lifestyle changes."

In addition to improving men's health and fitness, Bouchard said healthier lifestyles can prevent disease and save the health care system money.

While Bouchard is hoping to achieve similar results to those observed in Ontario and the U.K., she said she's already made one observation.

"I feel like men are more reliant on female partners to take care of their health. I've had five or six men call and ask if they could bring their wife," she said. "It's funny because we wouldn't see the inverse. We wouldn't see a program meant for women where they ask to bring their husband."