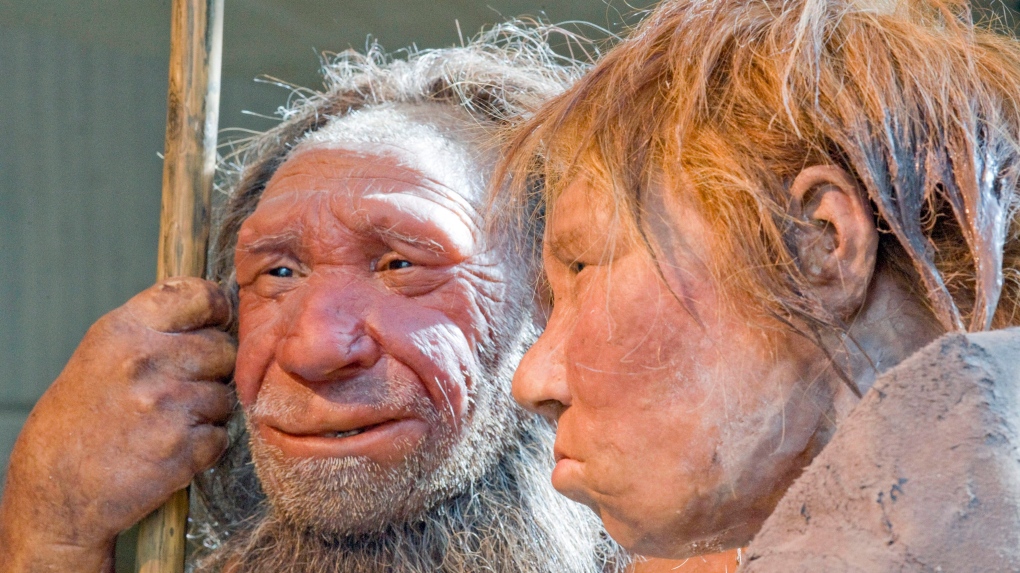 This Friday, March 20, 2009 file photo shows reconstructions of a Neanderthal man, left, and woman at the Neanderthal museum in Mettmann, Germany. A new study released by the journal Science on Thursday, Feb. 1, 2016 says a person’s risk of becoming depressed or hooked on smoking may be influenced by DNA inherited from Neanderthals. (AP Photo/Martin Meissner)

In 2010, Swedish geneticist Svante Pääbo developed a method to sequence and analyze ancient DNA from Neanderthal bones. Through mapping the entire Neanderthal genome, and comparing it to genetic records of living humans, he arrived at conclusive evidence that confirmed wide-spread anthropological speculations: most humans carry small traces of Neanderthal DNA in our genetics.

Most recently, these findings led one group of scientists to re-evaluate risk factors for behaviour disorders, addiction and human brain disabilities, such as neurological or psychiatric diseases.

An international team of scientists, led by researchers from the Estonian University of Tartu, analyzed Neanderthal DNA associations, tracing a wide range of human habits and psychological patterns. They also examined more than a hundred variants of brain disorders from the U.K. Biobank, a repository of biological samples used for research. The aim was to narrow down the specific contribution of Neanderthal DNA to human behavioural features.

“Our results suggest that Neanderthals carried multiple variants that substantially increase the smoking risk in people today,” Michael Dannerman, associate professor of evolutionary genomics at the University of Tartu and the lead author of the study, said in a news release.

Stefan Gold, a professor of neuropsychiatry, who co-led the study, added that significant associations of Neanderthal DNA with alcohol and smoking habits might “help us to unravel the evolutionary origin of addictive and reward-seeking behaviour.”

“It is important to note that sleep problems, alcohol and nicotine use have consistently been identified as common risk factors for a range of neurological and psychiatric disorders,” Gold said in the news release. “On the other hand, there are some intriguing findings from anthropology that have suggested some social benefits of higher tolerance to these substances in hunter-gatherers.”

Although definitive causation will require further analysis of ancient DNA sequencing and its association with modern humans, researchers like Dannerman believe certain genetic trends can be attributed to environmental factors that caused evolutionary adjustments. He explained that varying sleeping patterns, for instance, might be attributed to Neanderthals who migrated outside of Africa – an environment that is defined by different levels of seasonality and UV light exposures, which differs from the environments modern day humans later evolved in. This is just one example of how anthropological factors might be echoed in the behaviours of modern people.

This echo may have reverberated with the emergence of COVID-19.

Back in 2020, researchers in Germany identified a strand of DNA that has been associated with more severe instances of certain COVID-19 variants. They compared it to sequences linked to Neanderthal ancestors, and determined that genes inherited from this ancestry may have led to a more serious reaction while contracting the disease.

Through deeper examination, scientists expect new findings about how Neanderthal DNA may be affect human immunology and genetic dispositions to arise.

As Dannerman said in the news release, “these results provide interesting candidates for further functional testing and will potentially help us in the future to better understand Neanderthal-specific biology.”

The body of a man has been recovered following an industrial accident in Mississauga on Friday, Peel Regional Police say.

Canada's British Columbia features in a list of the 23 best places to travel in the world in 2023. The list was created by travel magazine Condé Nast Traveller.