Move over kale: Cauliflower set to be hot veggie for 2014 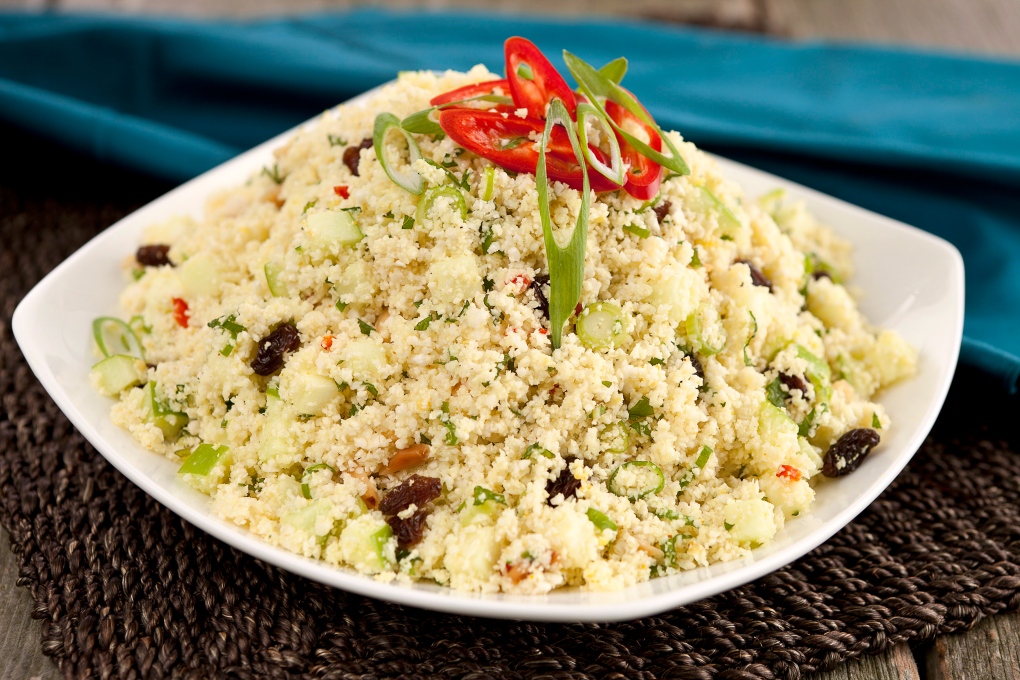 Cauliflower ‘couscous’ from the cookbook ‘In the Kitchen with Stefano Faita’ in shown in this handout image. (Penguin Canada Books Inc./Leila Ashtari)

TORONTO -- Cauliflower is the new kale, salt is the new pepper and doughnuts and burgers are going gangbusters.

Food trend watchers are bidding adieu to sliders, those small sandwiches made of beef, chicken, pulled pork or fish, cupcakes are waning while quinoa, now that everyone has learned to pronounce it, has gone mainstream.

There are oodles of noodles, from ramen to pho, while salted caramels, flavoured waters and roast chicken are taking off.

Coconut, too, is exploding this year, prepared sweet and savoury. Look for it in sugar, flour and vinegar.

Vegetables continue to be centre of the plate, edging out meat.

"I would say that cauliflower is the new kale and will definitely surpass kale this year," says Christine Couvelier, executive chef and global culinary trendologist.

"Kale had that buzz and everybody loves kale chips and how many restaurants have we seen that have kale on the menu, but cauliflower is certainly the huge buzz this year. Bigger than ever."

Some predict Swiss chard will take over from kale, says Dana McCauley, a food trend watcher and vice-president of marketing for Plats du Chef Foods. For those who don't know what to do with it, "people need to be told 'treat it like spinach,' and then they're OK.

"I was surprised when I heard people talking so much about Swiss chard because I think that cauliflower probably has a bigger chance of being a rival for kale than other veggies."

Cauliflower can be mashed, grilled, broiled or cut in steaks and barbecued, served on its own or in salad or tossed with herbs, vinegars and oils.

For those following a gluten-free food plan, there are many recipes for pizza with cauliflower crust, McCauley said in a telephone interview from her Vaughan, Ont., office.

Chef Susur Lee, who owns Lee and Bent restaurants in Toronto along with an establishment in Singapore, has had enough of the gluten-free trend though he acknowledges it's "not done but everybody's going crazy with it."

Couvelier says salt is the new pepper. "When we look at food shows and when we look at restaurant menus and even grocery shelves, the number of flavoured salts continue to grow. It's overtaking the pepper category."

"I think it also speaks to the fact that people are learning different flavoured salts help different dishes along better and they're not afraid to use it in small portions to their own discretion and, wow, what a flavour burst those different flavours can actually give you," the Victoria-based Couvelier said in an interview from Key West, Fla.

"A little bit with a lot of flavour goes a long way."

Salt falls into another trend -- customization -- which Couvelier says is particularly strong.

"So letting customers put their own twists on foods. That can happen in a restaurant setting, that can happen in a grocery retail setting depending on the products that gives you options when you purchase it and it can certainly happen in the home setting."

Creativity and innovation extend to burgers too.

"They're becoming more healthful and more local," says Couvelier, whose company Culinary Concierge (www.culinaryconcierge.ca) helps clients build their brands and keep ahead of market trends. "Some chefs and burger restaurants are grinding their meat in-house and making house-made condiments for on top. They're giving the consumer all the customization," with a choice of toppings and sides, like sweet potato fries, rice pilaf or grilled vegetables.

Some restaurants bake their own buns and brand them with little irons.

"I would say that interestingly I believe that sliders are on their way out, yet burgers continue to rise," she adds.

Burgers are competitive too, with people arguing over who has the best one, says McCauley.

"The whole burger gourmetization, if that's a word, is interesting not necessarily just because people are responding to it and they want to pay more for burgers, but it's also the way that the quick service restaurant side of the business is flourishing and why that middle section of the restaurant business is dying," notes McCauley.

"You've got fine dining restaurants really dialling back the finery, there are fewer tablecloths, less silver, less good crystal, more tumbler-style wineglasses. So they are encroaching on that middle section of restaurants.

"Then you've got QSRs (quick-service restaurants), which used to be McDonald's, Burger King, now it's Five Guys and Smashburger, Burger's Priest and all these other places that are a five- or six-dollar more cheque amount and deliver that chef-quality burger. You've got this whole section of restaurants that is really struggling out there because they don't have any place that they really fit any more. They have to reinvent themselves."

Cupcakes, those morsels beloved by trend watchers a few years ago, have plateaued, says McCauley. "They're here for the foreseeable forever. People just kind of count on them the same way they count on being able to get a muffin or a cookie."

Doughnuts, meanwhile, are still morphing, with shops devoted to the sweet treats mushrooming and shows like "Donut Showdown" airing on Food Network Canada.

McCauley is full of admiration for "brilliant" pastry chef Dominique Ansel of New York City, who created the Cronut, a croissant-doughnut hybrid, and began selling them in May. People can be seen lining up each morning to purchase the trademarked confections, which retail for $5 each at his SoHo bakery.

"He didn't launch the Cronut until he had the name secured. ... Dominique Ansel could have very easily with the amount of planning he put into it, taking the time to trademark the name, etc., he could have had a whole factory up and running. It's not hard to mass produce the Cronut, but he was smart. He kept it scarce. He had lines so people could take pictures. He's playing the long game. He's become famous."

Chef Michael Smith of Fortune, P.E.I., thinks foraging is on fire for 2014.

"That whole trend is really exploding all over North America and it's directly related to the whole Noma (restaurant), new Nordic cuisine influence," says the cookbook author and Food Network personality.

"It does take a year or two for that stuff to trickle its way down the pipeline, but that moment has arrived and I think we're seeing a huge explosion of interest in what we would call weeds or just foods around us that we've forgotten about and I think it speaks directly to our confidence in our cuisine."

Chef and cookbook author Lynn Crawford, who owns Ruby Watchco in Toronto and advocates using local suppliers, hopes consumers will be more aware of where their food comes from, which will help them make informed decisions about where they buy their fish and meat.

Salted caramels are exploding, with the flavour infused into doughnuts, crepes and ice cream, into any sort of glaze or sauce for pound cakes or angel food cakes or melted and drizzled over any desserts, says Couvelier.

She says it's been interesting in the last six to nine months to watch the number of manufacturers who have launched maple bacon potato chips.

"There's nothing new about the maple bacon food trend, but I'm hopeful that this year someone can make a maple bacon chip that tastes good. I don't think they're there yet."

But bacon is here to stay, say Smith and Couvelier.

"Bacon is its own food group," Couvelier says. "It never ceases to amaze me how people are creative and unique in using bacon, putting it on their menus, cooking it at home into fun things.

"Artisanal butchers across the country are so proud of their bacon, frequently offering more than one kind, smoked over different woods, sometimes natural, thicker, thinner. I think it's something that's just going to continue to grow."