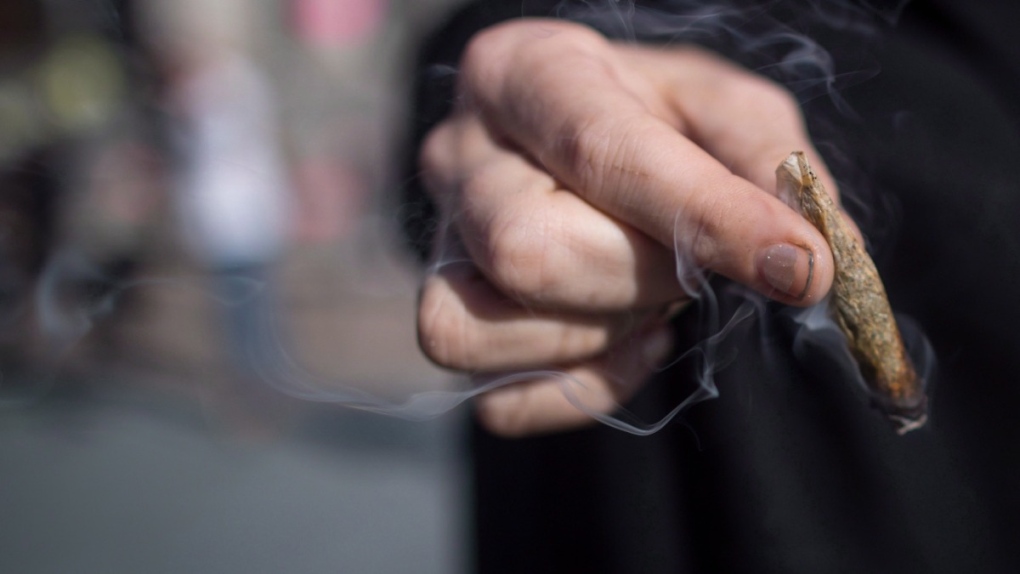 A man holds a joint while smoking marijuana to celebrate the legalization of recreational cannabis, in Vancouver on Oct. 17, 2018. (Darryl Dyck / THE CANADIAN PRESS)

It's a common assumption among marijuana users: Using weed will help you fall asleep and stay asleep. Scientists, however, aren't so sure that's true.

"This is an understudied but important area, as many people are increasingly turning to cannabis products as sleep aids," said sleep specialist Wendy Troxel, a senior behavioral scientist at RAND Corporation, who was not involved in the study.

Optimal sleep for adults is defined by the US Centers for Disease Control and Prevention as seven to eight hours a night.

Moderate consumption -- using weed less than 20 days during the past month -- didn't create short sleep problems, but people were 47% more likely to snooze nine or more hours a night, the study also found.

Why is short and long sleep a problem?

"Large population-based studies show that both short sleep and long sleep are associated with an increased risk of heart attacks and strokes, as well as the long-term progression of things like atherosclerosis, diabetes, coronary artery disease and any of the major cardiovascular diseases," said lead study author Calvin Diep, who is resident in the department of anesthesiology and pain medicine at the University of Toronto.

"It seems with sleep there's kind of this 'Goldilocks phenomenon' where there's an amount that 'just right,'" Diep said.

One in three Americans don't get enough sleep, according to the CDC. In addition, 50 million to 70 million Americans struggle with sleep disorders such as sleep apnea, insomnia and restless leg syndrome, which can ruin a good night's shut-eye.

The CDC calls that a "public health problem," because disrupted sleep is associated with a higher risk of conditions including high blood pressure, weakened immune performance, weight gain, a lack of libido, mood swings, paranoia, depression, and a higher risk of diabetes, stroke, cardiovascular disease, dementia and some cancers.

NO CLEAR EVIDENCE EITHER WAY

The study analyzed use of marijuana for sleep among 21,729 adults between the ages of 20 and 59. The data was gathered by the National Health and Nutrition Examination Survey, and is considered representative of over 146 million Americans.

"The problem with our study is that we can't really say that it's causal, meaning we can't know for sure whether this was simply individuals who were having difficulty sleeping, and that's why they use the cannabis or the cannabis caused it," he added.

Prior studies have also found a connection between the two components of marijuana, CBD and THC, and poor sleep. CBD, or cannabidiol, is a key component of medical marijuana, while THC, or tetrahydrocannabinol, is the main psychoactive compound in cannabis that produces the high sensation.

A 2018 randomized, double-blind, placebo-controlled study -- the gold standard -- found no benefit from CBD on sleep in healthy volunteers. Other studies have also found high rates of insomnia when withdrawing from nightly use of marijuana.

"At this time there still isn't any clear evidence that cannabis is helping sleep," said Dr. Bhanu Prakash Kolla, a sleep medicine specialist in the Center for Sleep Medicine at the Mayo Clinic in Rochester, Minnesota, who was not involved in any of the studies.

"We know that when people initiate use there is some benefit in the immediate short term but there is quick tolerance to this effect," Kolla said. There currently is no good quality evidence to suggest that cannabis will help improve sleep quality or duration."

Still, people continue to believe that weed is helping their sleep. Surveys of marijuana users show they do indeed rely on the drug for better sleep.

"The issue is that there's a disconnect between these anecdotal reports of people reporting therapeutic benefits and the evidence behind it in terms of the data," Diep said.

One possible reason, Kolla said, is that when people stop using cannabis after a period of regular use, the withdrawal effects from weed can cause sleep disruptions. That leads people to believe "the cannabis was in fact helping (sleep), while what they are actually experiencing are withdrawal symptoms."

Another factor to consider is the increased potency of weed today as compared to when many of the studies on cannabis and sleep were conducted, said Dr. Karim Ladha, staff anesthesiologist and clinician-scientist in the department of anesthesiology and pain medicine at the University of Toronto.

"A lot of the older data related to cannabis is based on lower doses of THC than what patients are using now, and there's very little research related to CBD," Ladha said.

"Studies tell us about what happens at a population level, but on an individual level that discussion is much more personal," he said. "The studies just give us the possibilities that (marijuana) could hurt your sleep, but it may help and so we just don't know until you try it."

That's why additional studies need to be done, he added.

"Patients are spending money and time and resources to obtain cannabis right now to help with sleep," Ladha said. "I think as the medical community, we need to do everything we can to make sure that we enable our patients to make the best possible decisions for their health."