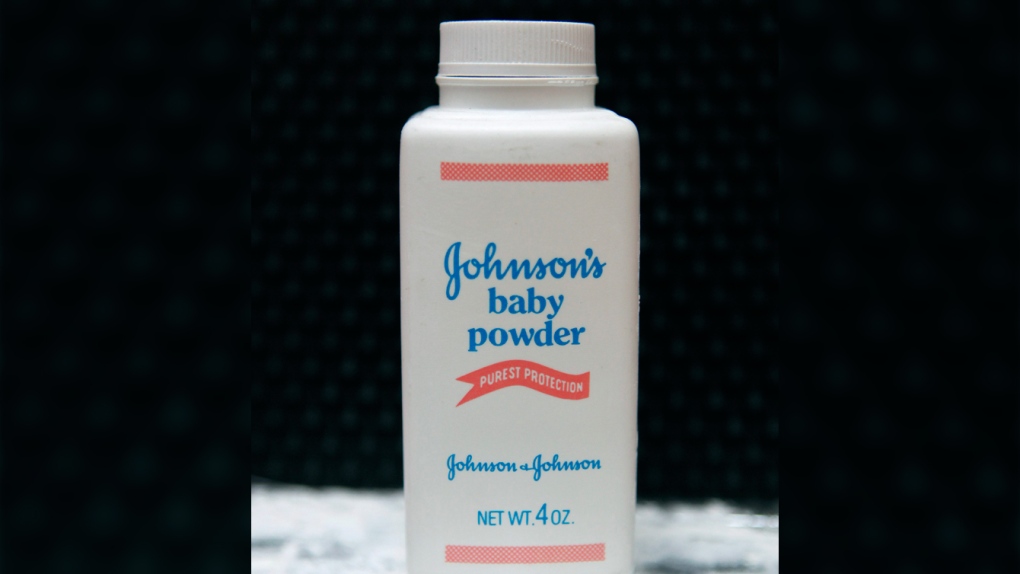 In this April 15, 2011 photo, a bottle of Johnson's baby powder is displayed in San Francisco. (AP Photo/Jeff Chiu)

Four Canadian women and their families have launched a class-action lawsuit against Johnson & Johnson, claiming the women developed ovarian cancer after using the company’s baby powder.

The planned suits come after several similar lawsuits were launched in the U.S. Earlier this month, a jury in St. Louis ordered Johnson & Johnson to pay US$55 million to a woman who claimed the company’s baby powder caused her ovarian cancer.

In another case in February, the company was ordered to pay $72 million to an Alabama woman who died from ovarian cancer, which she said was caused by using the powder. In both cases, the juries found that Johnson & Johnson knew of a possible link between its talcum powder and cancer but did not warn the public.

Here in Canada, Toronto-based Will Davidson LLP and Rochon Genova LLP have commenced a joint lawsuit. Their suit involves the families of four proposed representative plaintiffs who all developed ovarian cancer after extended use of the J&J's Baby Powder for feminine hygiene purposes.

“What I find most troubling about this case is that Johnson & Johnson’s baby powder has been known as a safe product that was made to be used on a daily use – that’s how it was promoted,” Rochon told CTVNews.ca. “And now they have been horribly deceived.”

He says the company should have warned customers decades ago about the link between the powder and cancer.

“They could have easily prevented many, many cases of ovarian cancer by simply placing an appropriate strong warning on the product. But obviously profits got in the way of being responsible,” he said.

Another proposed plaintiff is Mississauga resident Cindy Strathdee. The 56-year-old says she sprinkled the powder into her underwear for 30 years, unaware of any possible link to that practice and cancer. In 2012, she began feeling ill.

"I had a constant, nagging stomach ache. I had a large mass. My stomach was so bloated it looked like I was pregnant," she told CTV News.

She was diagnosed with Stage 3 ovarian cancer, and had to undergo a total hysterectomy and chemotherapy. She also developed blood clots in her legs and lungs and had to have blood thinning medication injections for six months.

The injections cost $1,000 a month, she said, which she has had to pay herself since she had no medical benefits. She has also been taking blood thinners for the last three years,

"Sometimes, I think of what I have been through and it’s crazy," she said.

Whether talcum powder causes or increases the risk for ovarian cancer is still unclear. Some studies suggest that women who regularly use talc in their vaginal area face up to 40 per cent higher risk of developing ovarian cancer.

And in 2006, the International Agency for Research on Cancer classified talcum powder as a “possible” human carcinogen if used in the female genital area.

But Johnson & Johnson cites several other studies saying the products are safe. The company is appealing both jury awards and fighting hundreds of other lawsuits on the same matter. A representative for the Canadian arm says the company does not comment on pending litigation.

Strathdee says she joined the lawsuit because she feels the public deserves to know what she says is the truth.

"You trusted that company and to think that could happen...there are people still using it."