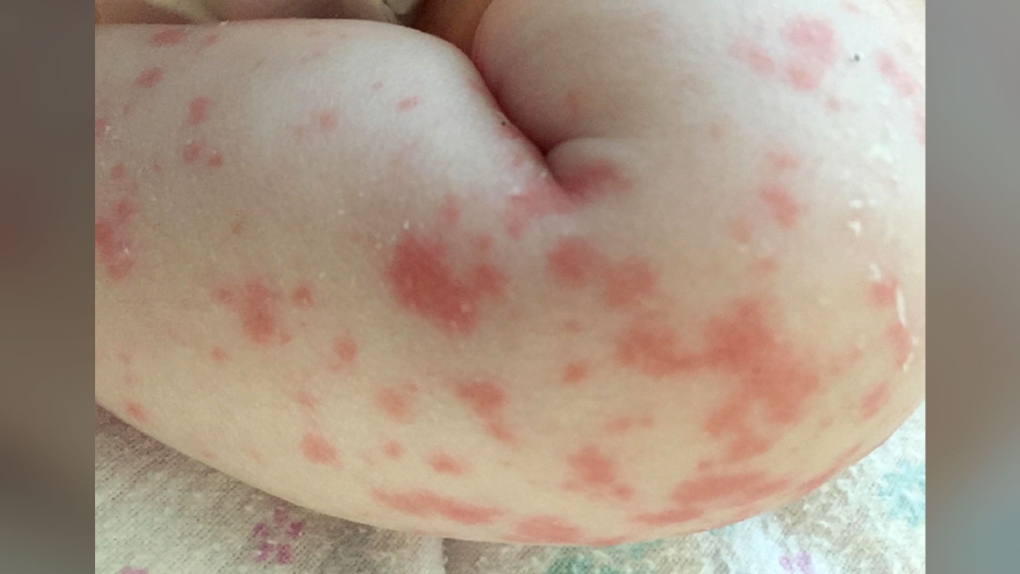 Photo of the rash on the left lower limb of an eight-day-old infant who had a water birth. (Canadian Medical Association Journal)

A Canadian case study involving a newborn girl who spent five weeks on a ventilator following an underwater birth in a hot tub is highlighting the risks associated with the birthing method.

A team of doctors published a warning about hot tubs in the Canadian Medical Association Journal on Monday, detailing the case of a baby girl who suffered multiple organ failures just days after her birth.

The case study written by Michelle Barton, Brianna McKelvie, Aaron Campigotto and Tara Mullowney says the girl was delivered underwater in a hot tub, filled with water three days before, and under the supervision of a midwife. She weighed 3.49 kilograms, was breastfed and was an otherwise healthy baby girl.

Eight days after she was born, the baby girl was admitted to a London, Ont. hospital with fever, poor feeding and fussiness. That same day, she was moved to the intensive care unit with multi-organ failure due to sepsis. After multiple tests, the baby was started on antibiotics and began to improve.

On day 13 of her hospital stay, the baby developed a rash on her limbs.

Tests found the baby was infected with legionella, a bacterium typically found in pools and hot springs as it thrives in temperatures between 20°C and 42°C.

"Our case serves to highlight a severe and potentially fatal adverse neonatal outcome of underwater birth, especially when prefilled heated pools are used," Barton wrote in the report.

After five weeks on a ventilator, doctors discharged the baby with close follow-up of her condition.

According to the report, “legionellosis is an uncommon diagnosis in the neonatal period.”

Several neonatal legionellosis reports have been linked to contaminated water systems at residences or hospitals, through the inhalation or aspiration of contaminated water in humidifiers, baths and birthing tanks used for water births, the report said.

According to the case study, “neonatal legionellosis presents as a potentially fatal sepsis syndrome characterized by severe pneumonia progressing to acute respiratory distress syndrome, septic shock, multiorgan failure and death in more than half of cases.”

“Our case serves to highlight a severe and potentially fatal adverse neonatal outcome of underwater birth, especially when prefilled heated pools are used,” the doctors wrote in the case study.

“Factors such as prefilling the tank days ahead of delivery, inadequately disinfecting the birthing tank, using a contaminated water source, using jetted tubs, and heating water all increase the bacterial load of the birthing water.”

The researchers were unable to test the birthing water for the bacterium as the hot tub had already been emptied and disinfected.

The report suggests testing for legionella in cases of severe pneumonia if the baby develops respiratory complications.

“Practitioners may wish to consider Legionella testing even if routine cultures identify a plausible pathogen in infants presenting with severe necrotizing pneumonia that progresses to respiratory failure within two weeks of an underwater birth," the authors conclude.

A water birth involves the mother being in a pool of warm water for at least a portion of labour. Supporters of the method say it can be more relaxing for the mother and cause less distress to the infant as it is born into an environment similar to the womb.

Doctors in the United States and United Kingdom recommend avoiding pools with jets or recirculating pumps for water births. The American College of Obstetricians and Gynecologists recommends births on land instead of in water as there remains insufficient data to determine the risks and benefits of water births during labour and delivery, the doctors write in the case study.