It’s a small step towards changing the way homes are built, but researchers hope it’s one that could help save hundreds of lives every year.

For decades, the National Building Code of Canada has suggested that stairs need to be a minimum of 21 centimetres (or 8 1/4 inches) when it comes to the treads.

But on average, every day in Canada, nearly one person dies falling on a set of stairs, and more than 270 people end up in the hospital, according to the Canadian Public Health Association. And elderly people make up two-thirds of those cases.

A study by the charity organization SmartRisk estimated that treating the resulting trauma, as well hospitalization and emergency room visits, cost the health care system $580 million in 2012.

Now, researchers from the Toronto Rehabilitation Institute say that increasing the depth on steps by just five centimetres (or 2 inches) increases foot stability, and significantly lowers the risk of falling.

"We estimate 13,000 falls due to stairs will be reduced, and 39 deaths will be prevented in the first five years of its implementation," said Toronto Rehabilitation Institute scientist Alison Novak.

Geoff Fernie, director of research at the hospital, said the problem is that most stairs aren't deep enough to adequately support the average adult foot.

"When you step onto a step, you expect it to be at least as long as a foot," he said.

"If half of your foot is on the front, it is easy for your foot to slip in front and tumble forward."

Following a review, the National Building Code of Canada updated its standards for stairs in December.

Rick Gratton, a senior development manager at Brookfield Residential in Calgary, has already started building homes that meet those new criteria, with stairs that are at least 25 centimetres deep.

"People take their stairs for granted," he said.

Some groups, however, go further, including the Canadian Mortgage Housing Corporation which advocates for a tread depth no shorter than 28 centimeters (or 11 inches). 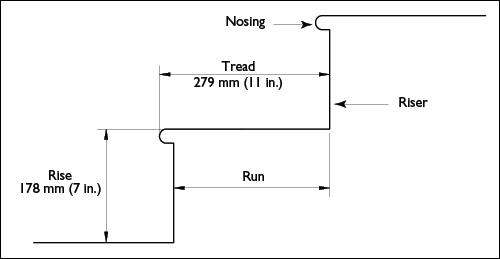 However, some builders have objected to the changes, saying deeper stairs would require a bigger hole to accommodate the staircase, taking space away from other parts of the home.

The National Building Code of Canada also has no direct authority over construction, which falls under provincial jurisdiction.