In a Canadian first, Yukon rolls out cancer warning labels on alcohol 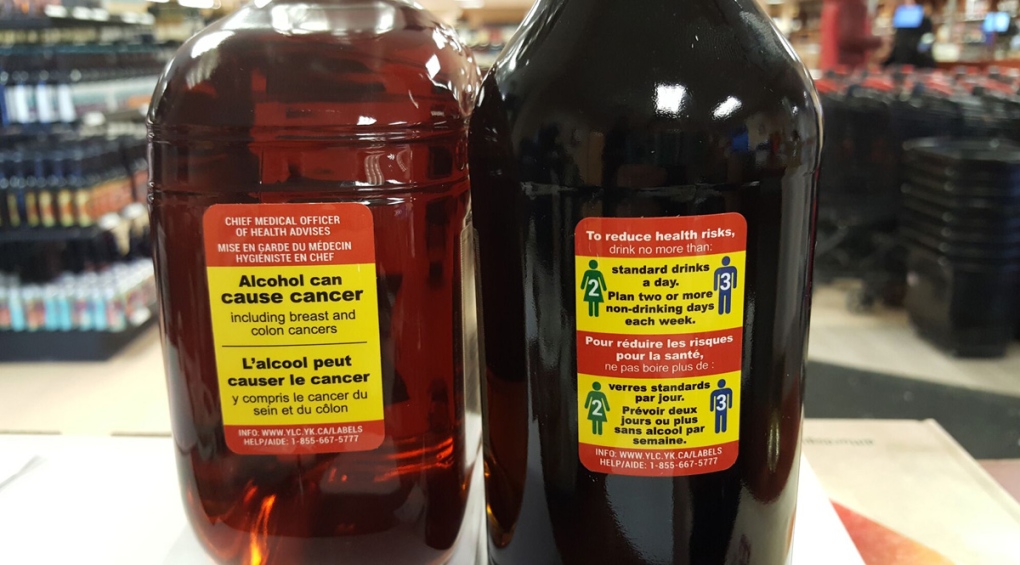 Yukon has become the first jurisdiction in Canada to begin adding warning labels on bottles of wine, beer and liquor, to advise consumers about safe consumption levels and to remind drinkers that alcohol can cause cancer.

The new yellow and red labels began appearing this week on all bottles and cans sold at the Whitehorse liquor store. The labels spell out Canada’s low-risk drinking guidelines that suggest limiting alcohol to:

Warning labels on alcohol aren’t new for Yukon drinkers. Since 1991, the territory’s government has required the Yukon Liquor Corporation to place labels on all its products warning of the risks of alcohol use during pregnancy.

Yukon has the highest alcohol sales per capita in Canada. It also has one of the highest cancer rates in Canada, according to Statistics Canada and a recent report from Yukon Health and Social Services.

The new labels will form the next phase of research in the Northern Territories Alcohol study, led by the University of Victoria’s Canadian Institute for Substance Use Research.

Erin Hobin, a scientist at Public Health Ontario who is involved in the study, says previous research has found that only about 20 per cent of Canadians are aware of the link between alcohol and cancer – particularly colon and breast cancer.

“So the main aim of this research is to better understand if an enhanced warning label can increase awareness of the health risks of drinking alcohol, as well as to support safer alcohol consumption,” she told CTV News Channel.

During the first phase of the study, researchers spent more than two years travelling to the territory to conduct focus groups with consumers and health authorities on alcohol, and found strong support for labels displaying national drinking guidelines, health messaging, and pregnancy warnings.

They also found that consumers were more likely to correctly estimate how much they were drinking when presented with labels showing standard drink sizes and low-risk drinking information.

“Our research told us that consumers would be accepting of these new enhanced labels,” Kate Vallance, research associate at CISUR, said in a statement this week.

“For this second phase of the study, we will apply these findings in a real-world setting instead of in a focus group, which means more awareness of the health risks of drinking and the low-risk drinking guidelines, as well as a reduction in harmful drinking.”

Final results of the study are expected in the summer, 2018.

The findings from this next phase of the study will be used by other governments and public health practitioners to inform future alcohol harm reduction strategies in other jurisdictions in Canada. Funding for the project was provided by Health Canada, Canadian Centre on Substance Use, and Addiction, and Public Health Ontario.