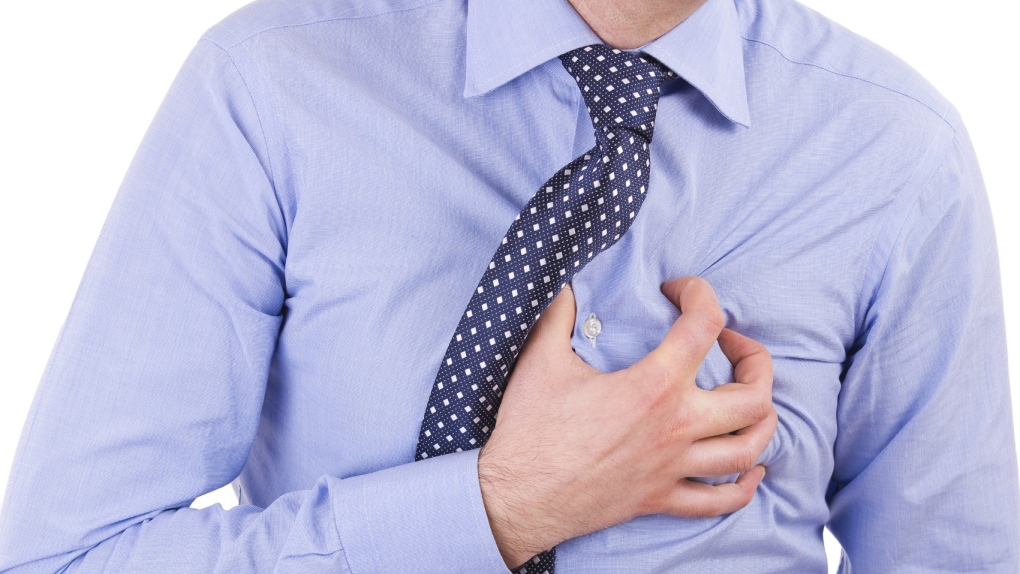 TORONTO -- Middle-aged Canadians who have had a heart attack, stroke or cardiac arrest are less likely to be working three years later, and those who can keep working often experience a significant drop in income, researchers report.

In a 2005-2013 study published Monday in the Canadian Medical Association Journal, researchers evaluated the long-term effects of cardiovascular events such as a stroke on people's capacity to work and any changes in their annual earnings.

One-third of heart attacks, a quarter of strokes and 40 per cent of cardiac arrests -- in which the heart suddenly stops beating -- occur in working-age people under 65 and can result in lingering physical and/or cognitive disabilities.

"For people of working age, one of the most important things is the ability to work and earn," said lead author Dr. Allan Garland, an internal medicine specialist at the University of Manitoba. "So it's a relevant long-term outcome."

The study linked Statistics Canada hospitalization data and anonymized tax returns to compare more than 24,500 Canadians aged 40 to 61 who had suffered a heart attack, stroke or cardiac arrest against their age-matched peers who had not experienced one of those life-threatening events.

Researchers looked at each person's annual employment earnings for two years prior to the cardiovascular event, then compared them to three years of earnings afterwards.

The figures were then compared to those for people who had not been affected by a heart attack, stroke or cardiac arrest to determine the affected group's relative loss of income.

"Three years after admission to hospital for any of these health events, people who survived were less likely than the matched participants to be working and had greater losses in annual earnings," Garland said.

"The loss in earnings was substantial, with reductions ranging from eight per cent to 31 per cent. Even if people were able to work, their incomes in the third year after the event were five per cent to 20 per cent less than before."

The financial fallout from suffering a stroke was the most significant, with a 31 per cent drop in earning power versus 23 per cent for cardiac arrest and eight per cent for heart attack.

"And if you looked at the effect on the average annual earnings, it was $14,000 and change -- which was 31 per cent of their baseline salary. So stroke patients were losing about a third on average of their incomes."

That's because strokes, which damage brain cells, can potentially leave a person with a disability, including weakness on one side of the body, impaired speech or cognitive difficulties.

Such deficits could mean a factory worker left with a weak leg might no longer be able to perform physical tasks like lifting or an office worker with an affected hand and arm could be unable to operate a computer, Garland explained from Winnipeg.

For Carole Laurin, a series of strokes at age 42 meant she had to leave her Manitoba teaching job due to cognitive deficits and residual weakness on her left side that still affects her mobility.

Now 57 and living in Ottawa, Laurin said she was fortunate because her teacher's long-term disability pension covered physio, occupational and neuropsychological therapy.

"I think I'm lucky because a lot of stroke survivors I've met don't have a pension plan through their employer, so they're living off their CPP disability," she said. "They're struggling more than I am."

Still, even with her pension, Laurin experienced about a 40 per cent drop in income when she had to give up her career. And there was also the psychological blow.

"It took me two years to grieve the loss of not ever being able to work again. That was a tremendous loss, I still feel it."

Patrice Lindsay, director of systems change and stroke for the Heart and Stroke Foundation, said it's not only the individual who has a cardiovascular event who can suffer financially.

There's also the person's family -- "the spouse who can't go back to work because they have to provide more intense care or the children of older people who have an economic impact if they have to take time off work to go help their parents or to take them to medical appointments," she said.

Lindsay said she's excited about the University of Manitoba study because it provides measurable evidence about the financial consequences of heart disease and stroke that can be presented to the provinces in advocating for change.

"A 40- or 45-year-old is not ready to retire, but what we're missing in our system right now is widespread availability of specific targeted vocational rehabilitation ... that helps get them back to work," she said.

"We've heard many, many times about people having to burn through their retirement savings to pay for their rehab so they can get back to work and have a higher functional level."

Garland said unemployment and lost earning power due to common cardiovascular events have broad societal relevance, with consequences such as worsening health for patients, potential bankruptcy and loss of tax revenue for governments.

"I think that the goal here needs to be to understand the magnitude of these problems ... and then institute policies to try to help these people get back to work."