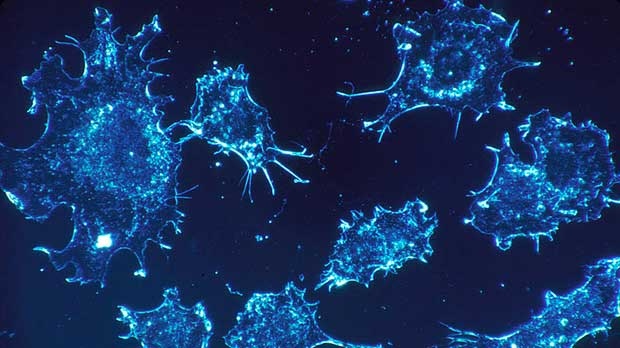 Scientists have discovered signs of acute myeloid leukemia can be present many years earlier. (File)

TORONTO -- Symptoms of acute myeloid leukemia tend to arise quite suddenly, but scientists have discovered signs of this aggressive, deadly form of blood cancer can be present many years earlier -- providing hope for a treatment that could stop the disease from ever occurring.

A team of Canadian and international researchers has discovered a way of predicting if healthy individuals risk developing acute myeloid leukemia, or AML, up to a decade before its onset.

The findings, published Monday in the journal Nature, answer the question of where, when and how the disease begins, said John Dick, a senior scientist at Princess Margaret Cancer Centre in Toronto and a co-principal author of the study.

"We have been able to identify people in the general population who have traces of mutations in their blood that represent the first steps in how normal blood cells begin on a pathway of becoming increasingly abnormal and puts them at risk of progressing to AML," said Dick.

AML, the most common type of leukemia in adults, begins in stem cells within the bone marrow that have picked up a genetic mutation. It causes them to produce immature white blood cells called myeloblasts. Over time, these dysfunctional cells take over and crowd out healthy cells, resulting in leukemia.

Symptoms include fever, bone pain, fatigue, shortness of breath, frequent infections, bruising and unusual bleeding, such as recurring nosebleeds and bleeding from the gums.

More than 1,300 Canadians develop AML each year, according to 2013 estimates from the Canadian Cancer Society. Almost 1,050 died of the disease that same year.

Men are more likely than women to develop this kind of leukemia. Risk increases with age, with the blood cancer occurring most commonly in adults age 65 and older.

"AML is a devastating disease diagnosed too late, with a 90 per cent mortality rate after the age of 65," said co-author Sagi Abelson, a post-doctoral fellow in Dick's lab.

The current study builds on Dick's 2014 discovery that a pre-leukemic stem cell could be found lurking amongst all the leukemia cells present in a blood sample taken when a person is first diagnosed with AML. The pre-leukemic stem cell still functions normally but has taken the first step in generating cells that became increasingly abnormal.

"So what we had done was we had captured pre-leukemia, we had captured the idea that there is a stem cell that has picked up a mutation and it can sit there presumably for some period of time and start to take over the blood before you actually get leukemia," Dick explained in an interview.

"It predicted that if we sampled the general population, we might be able to find individuals who are at risk for developing leukemia long before they actually have leukemia," he said.

To conduct the study, the scientists turned to a European research project that had enrolled 550,000 people and followed them for about 20 years, looking for health and lifestyle factors that might be associated with the development of different types of cancer.

Dick and his colleagues looked at data from about 100 participants who had developed AML six to 10 years after enrolment in the European study, comparing their information with 400 aged-matched subjects who did not develop the disease.

Using a specialized gene-sequencing tool they had developed, the team analyzed all 500 participants' blood samples looking for the most common genes known to be altered in AML.

They found the blood system had begun picking up mutations years before a diagnosis of leukemia, a finding that enabled the team to predict with "very high accuracy" who had been at risk of developing the disease.

"What the data show is the disease has had a long evolution and our normal stem cells are the reservoir in which this evolution happens," said Dick. "This is giving us huge insight into the mechanism of how leukemia develops from within a normal stem cell and the pathway that it takes."

He said using the predictive test in the general population would offer a "remarkable opportunity" to pinpoint those at high risk of developing acute myeloid leukemia, giving researchers a 10-year window to possibly intervene.

"Maybe we can block these pre-leukemic stem cells from progressing," Dick suggested, noting that there are drugs that target some genes implicated in AML.

"We might want to consider clinical trials where we put people on ... (such) drugs, not to kill pre-leukemic stem cells but to prevent them from progressing," he said.

"So it's an opportunity not for curing people, but actually preventing the disease."