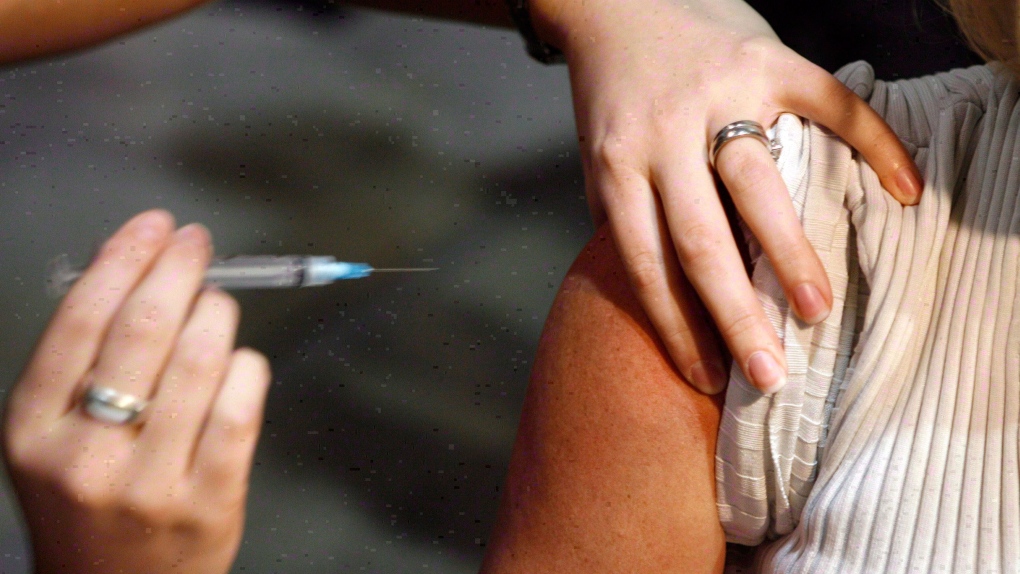 A patient gets a shot during a flu vaccine program in Calgary on Oct. 26, 2009. (Jeff McIntosh / THE CANADIAN PRESS)

TORONTO -- The 2012-13 influenza season was a harsh one, and one in which flu vaccine offered disappointingly modest protection against the main circulating strain, H3N2.

The limited protection -- around 41 per cent for healthy adults and a mere nine per cent for seniors -- was surprising, given that the H3N2 viruses causing illness were a close match for one the World Health Organization had selected for inclusion in that winter's vaccine.

New Canadian research is offering an explanation for that puzzling and unfortunate phenomenon. It reveals that the H3N2 component that went into the vaccine wasn't exactly what the WHO's experts ordered.

The vaccine virus contained several mutations that appeared to have undercut its ability to generate antibodies that would recognize and protect against the circulating H3N2 viruses, reported the study, published Tuesday in the journal PLoS One.

"We were looking to nature. And it was in fact manufacturing, not nature, that explained the low vaccine effectiveness," Dr. Danuta Skowronski, lead author of the new research, said in an interview about the findings.

Skowronski, an influenza expert at the British Columbia Centre for Disease Control, worked on the paper with more than a dozen scientists from a variety of institutions across the country, including the National Microbiology Laboratory in Winnipeg, Quebec's Public Health Institute, Public Health Ontario and several universities.

She and her colleagues were at a loss to explain why a vaccine that looked like it should have offered good protection wasn't doing so. In particular, they noted an increase in reports of flu outbreaks in long-term care facilities where high numbers of residents and staff had been vaccinated. Something was amiss.

Tests showed the reference virus selected by the WHO would have offered good protection against the viruses they were collecting from sick Canadians. But the same tests showed the H3N2 component in the vaccine didn't mount that protection.

Skowronski described the realization that the problem related to an issue in production as an "Aha moment."

"We were going down the wrong path," she said.

"It wasn't antigenic drift" -- the term used to describe small changes in circulating viruses. "It was vaccine mutation."

Most of the world's flu vaccine supply is produced using a system where influenza viruses are grown in hen's eggs. In the process, the viruses have to adapt -- acquire some mutational changes -- to grow in eggs.

It's been known for decades that that process has the potential to introduce mutations that weaken the protection that vaccine virus can offer. But what some people felt was a theoretical problem is actually a current challenge with the H3N2 component of flu vaccine.

(The same is true for vaccine viruses grown in cell culture, though it is thought the risk of adaptation introducing key mutations is lower in cell culture. And cell culture vaccines currently make up only a fraction of the global supply.)

Richard Webby is a leading influenza researcher and head of the WHO's collaborating centre for influenza at St. Jude Children's Hospital in Memphis, Tenn. He takes part in the twice annual WHO meetings when flu experts recommend what should go into the northern and southern hemisphere flu vaccines.

Webby said that committee has been aware of the problems with the H3N2 vaccine component. And in fact WHO reports issued after those twice annual meetings contain references to the problem -- though few without advanced knowledge of microbiology would have been able to decode them. And Skowronski said many of the scientists and public health officials she's presented her data to have been shocked to realize mutations could be introduced in the production process.

Webby said this type of problem has occurred in the past, and resurfaced, in this case with H3N2 viruses, in 2011 when a new clade (sub-family) of the viruses emerged. They are known as Victoria-like viruses. (Flu virus clades are named after the place where they were first isolated by a laboratory.)

"This batch of H3N2 viruses, for whatever reason, is difficult to isolate in eggs. They don't grow well," Webby explained.

"And when you do get them growing well, obviously that's because the virus has changed. And unfortunately with these Victoria-like ... viruses, where they change to grow better in eggs is an antigenic site."

An antigenic site is a portion of a flu virus that would be visible to the immune system, and would be the target of antibodies generated by vaccine. If the sites in the vaccine virus differ from those seen on circulating viruses, the antibody response triggered by the vaccine would be weaker.

Webby said since the problem became apparent, the handful of laboratories that produce vaccine viruses for the world's flu vaccine manufacturers have been trying to come up with a H3N2 component that more closely hews to the Victoria clade viruses. The one currently being used is a second attempt, a Texas-like virus.

"There have been intensive efforts to get something that's better. The Texas is a little bit better, but it's still not perfect," he said.

The mismatch of the H3N2 vaccine virus didn't have much impact in North America this winter, because almost all of the flu activity here this year was caused by the H1N1 strain.

But if H3N2 plays a larger role next flu season, one could expect a repeat of the 2012-13 season, Skowronski warned.

She suggested more work needs to be done to try to figure out if the adaptation process can be better controlled and to determine which mutations are likely to lead to lower vaccine effectiveness.

And if the process can't be improved?

"If we can't control that ultimately, well then we need to be advocating for a different approach than this egg-based manufacturing we've had since the 1940s," she said.

Michael Osterholm, director of the Center for Infectious Diseases Research and Policy at the University of Minnesota, has been a leading advocate for an overhaul of flu vaccine production approaches. He agreed that findings like these underscore the need for what he calls "21st century flu vaccines."

He praised Skowronski's paper, saying it adds to the understanding of how flu vaccines work -- or don't.

"While this phenomenon is not new, I think this is really the first time we've seen the direct relationship between sub-standard protection levels and the vaccine strain," he said.

"It's information that is material for understanding how well these flu vaccines are working."