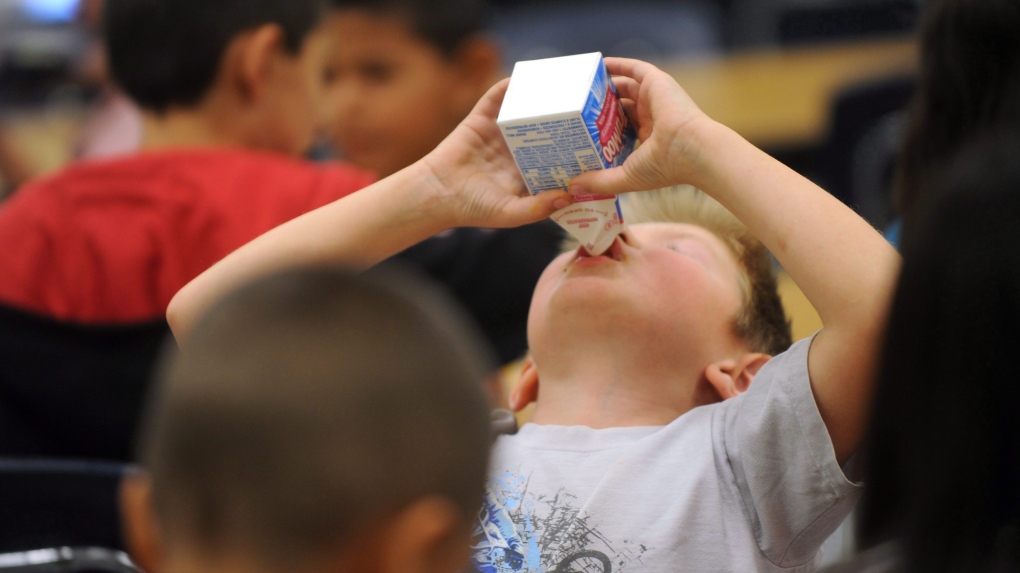 A Grade 2 student in Abilene, Texas, drinks his milk during lunch in this 2011 file photo. (AP Photo/Abilene Reporter-News/Nellie Doneva)

The study, published in the American Journal of Clinical Nutrition, found that the more non-cow's milk a child drinks, the lower their height.

Even kids who drank a combination of cow's milk and non-cow's milk daily tended to be shorter than average, the study found.

The study was based on parental reports about their child’s drinking habits as well as height measurements taken at their doctors’ offices.

Though the study was not designed to look at why non-cow’s milk was linked to shorter heights, the authors suspect that children who drink non-cow's milk consume less dietary protein and fat than those who drink cow's milk. Both are essential to growth in early childhood.

For example, two cups of cow's milk contains 16 grams of protein -- 100 per cent of the daily protein requirement for a three-year-old child. Two cups of almond milk on the other hand typically contains only four grams of protein.

Lead author Dr. Jonathon Maguire, a pediatrician at St. Michael's Hospital in Toronto, says the finding is important because height is a key indicator of children's overall health and development.

"The lack of regulation means the nutritional content varies widely from one non-cow's milk product to the next, particularly in the amount of protein and fat," he said in a statement.

The study was based on 5,034 children between the ages of 24-72 months who took part in a long-term study from St. Michael’s and Sick Kids hospitals called TARGet Kids! (The Applied Research Group for Kids)

The study found that 92 per cent of children drank cow's milk daily, while 13 per cent drank non-cow's milk.

In previous research, Dr. Maguire has found that young children who drink whole milk are leaner and have higher vitamin D levels than those who consume low-fat or skim milk.

That study didn’t delve into the reasons behind the findings either, but Dr. Maguire hypothesized that kids who drank a whole milk may feel fuller, and thus don’t consume as many high-calorie foods as kids who drank lower fat milks.

Maguire also published research in 2012 that found that two cups, or 500 ml, of milk a day was the right amount to give to children between the ages of two and five to ensure they had adequate levels of vitamin D and iron.

Any more and they would begin developing problems with iron absorption; any less and their vitamin D levels would drop.

This latest study was funded in part by the Canadian Institutes for Health Research and the St. Michael's Hospital Foundation.