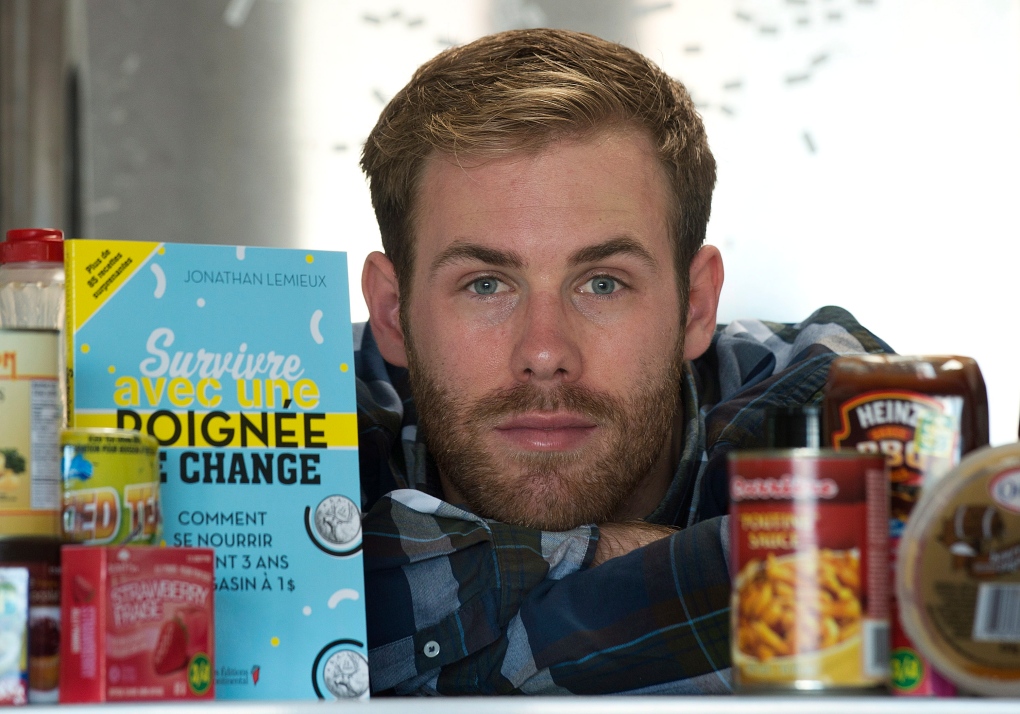 Jonathan Lemieux, author of 'Survivre avec une poignee de change' (Surviving on a Handfull of Change), poses for a photograph with a copy of the book and food he bought at a Dollar store, at his apartment in Montreal Saturday, Sept. 28, 2013. (Graham Hughes / THE CANADIAN PRESS)

MONTREAL -- A Montreal man who spent three years consuming meals consisting mainly of staples found at the local dollar store has parlayed his culinary journey into a cheap-eats cookbook.

But as Jonathan Lemieux tells it, the exercise wasn't a wild attempt to lose weight or partake in a dieting fad -- it was driven by necessity.

The cookbook, "Survivre avec une poignee de change," translates loosely to "Surviving With a Handful of Change," and chronicles his time as a student trying to make do with limited funds.

Lemieux, now 30, had gone back to school at the time to do a second university degree in fine arts. With a bit of money from working and a budget based on loans and bursaries, he found himself on a very strict food budget.

"I decided it was too expensive for me to go to the grocery store, it was almost a luxury," Lemieux said in a recent interview.

He worked with a monthly food budget of between $75 and $115 -- or roughly $20 to $25 a week. Armed with basic cooking skills, he was trying to figure out how to stay fed. A trip to the local dollar store triggered an idea.

"One day I was shopping at Dollarama for pens and pencils and I'd forgotten they sell food, so I started to buy all my food there," Lemieux said.

He estimates that 90 per cent of what he ate was bought at the store. He would supplement those foods on occasion with discounted, and nearly expired, meats and vegetables from the grocery store. Lemieux said he tried to clip coupons when he could or go to the open-air market to pick up fresh foods in season.

"But most of the time I'd end up at Dollarama," Lemieux said.

Instead of eggs and milk, he used plenty of mayonnaise, soup base and oil. Dollar-store bread was a staple as were chick peas -- lots and lots of chick peas.

Some of his favourite recipes include a version of seafood paella using canned mussels and oysters and with beef jerky replacing chorzio sausage.

"It was probably much more fattening but it was still good," assures Lemieux.

He made a shepherd's pie using tinned beef, canned corn and a box of mashed potatoes. Another favourite was a beet soup, which he said was much like Polish borscht. There was also a pickle soup, "which sounds disgusting, but it's actually pretty good," he added.

Lemieux even found a way to come up with desserts, which he qualified as a luxury while on budget. His favourite was mustard cookies, which include mustard and lots of sugar. "I like them, they're pretty good, and I still make them actually."

The Montreal-area native kept his dietary habits from his family. He said he never told them because it was important to him to take care of himself without seeking handouts.

"I think they knew I was struggling with money but they didn't know it was to that extent," Lemieux said.

"I saw my mother and I gave her the book (recently) and she said to me 'I had no idea you ate like this'."

Lemieux no longer does.

After completing his second degree, he's been working steadily since 2011. But he still had the recipes he'd tried over the years scribbled out on paper. Of those, more than 90 made it into the book. Lemieux stands by the recipes -- including a lot of soups, pastas and salads.

The book was a bit of an accident -- joking around with a teacher about his eating habits led to the idea of publishing a book for friends. But then the publisher expressed interest.

It's not the first time the so-called dollar-store diet has been attempted and experts often say consumption of that much processed food can be problematic in the short term and long term.

Genevieve Nadeau, a dietitian who oversaw a local newspaper reporter's own one-week Dollarama diet this summer, said the premise of the Metro newspaper's report was to see if the journalist could meet standard nutritional requirements by eating dollar-store food.

Assessing a food diary, she found way too much salt in such a diet, which is common when eating canned items. Lots of canned meats are high in fat, while canned vegetables are heavy in salt and have little protein.

So Nadeau was alarmed to hear about a three-year diet and couldn't imagine it was much fun eating such bland food.

She said there are other options: planning, checking for grocery store specials and buying local. Also, going frozen over canned for vegetables is better. If meat and fish are too expensive, then opt for items like tofu, eggs, and beans.

"Honestly, I'd love to see a blood sample from this individual," said Nadeau, who has never met Lemieux. "I wonder if this person would be able to maintain basic nutritional requirements, because if one is mildly active, it takes vitamins, minerals and, without fresh products, I don't see how you can get what you need."

Amazingly enough, according to Lemieux, he didn't have any major health issues during the three years.

"I was focused on surviving," he said. "A lot of people talk to me about it now but I was never sick, I never felt bad, I never went to the hospital."

"Maybe my levels of sodium and cholesterol went through the roof, I don't know," Lemieux said. "But I'm sure making meals ... even with those ingredients, was perhaps a little bit better."

The book was released at the end of September in French. Lemieux says it's too early to say if the book will have an English translation, but he'd welcome one.

Meanwhile, he will spend the next two months living in New York City for professional reasons. He says he might pay the local dollar store a visit to check out what is available, but more out of curiosity. His budget will be roughly $30 a day while living the U.S.

-- Jonathan Lemieux's "Survivre avec une poignee de change," by Transcontinental, is available in bookstores and for purchase online for $19.95.