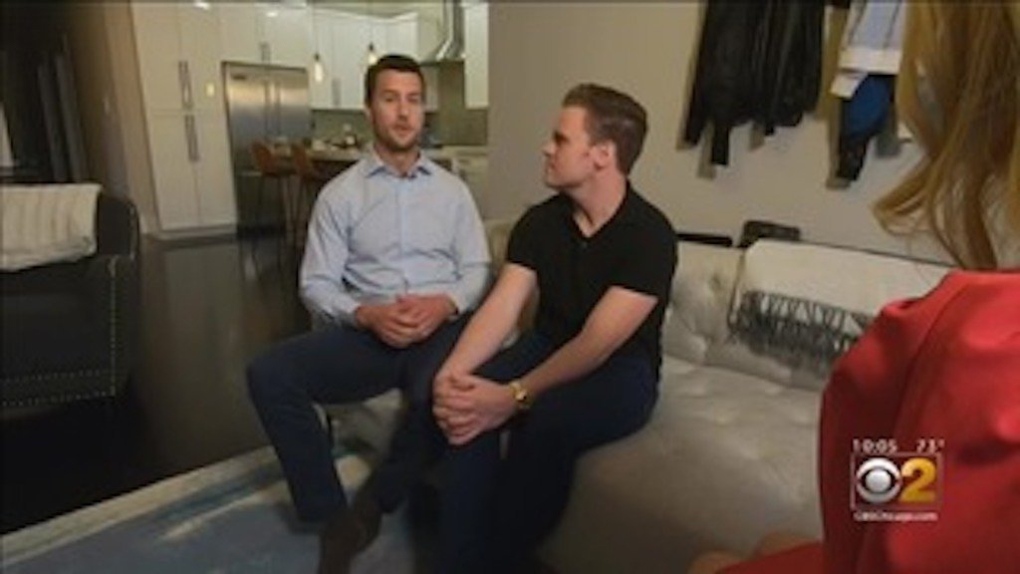 Dr. Dillon Barron (right) and his partner, Eric Seelbach (left), speak out after Barron was not allowed to donate his plasma because he is gay. (WBBM-TV / CNN)

Dr. Dillon Barron is a frontline emergency room doctor on Chicago’s north side.

He was also once a COVID-19 patient himself and has since recovered. But when he tried to donate his plasma to help save others, he was flat-out denied because he is gay.

Blood donation guidelines have been the centre of controversy for years. But in the age of COVID-19, blood and plasma donations are crucial.

Barron and his partner, and their U.S. representative, are hoping it will be enough for change.

“We saw lots of death, lots of sad stories, lots of young people,” he said.

Both he and his partner contracted COVID-19 themselves. It’s been a long, exhausting road, and they were excited to donating their anti-body rich plasma.

“I really felt passionate about doing something; wanting to be in control and feel like I was helping people,” Barron said.

But according to the U.S. Food and Drug Administration blood donation guidelines, there was zero chance – because men who have sex with men can only donate if they have not been sexually active for three months. That applies regardless of whether they’re in committed relationships or practicing safe sex.

“We’re sitting on something that could be saving lives,” Barron said.

One study found that blood banks could be missing out on hundreds of thousands of pints of blood due to this policy.

“Those won’t be available because of bigotry or laziness or people who don’t believe in science,” said Barron’s partner, Eric Seelbach.

So is the policy backed by science? We asked an HIV expert.

“Short answer is there is no science currently to support that,” said Dr. Anu Hazra, infectious disease physician University of Chicago and staff physician at the Howard Brown Health Center.

Hazra said the guidelines, “going from a lifetime ban, to a 12-month ban, to a three-month ban, are based on 1983 regulations surrounding the HIV epidemic."

But testing and screening has improved dramatically since then.

Instead, Hazra advocates for “individual risk assessments for every donor, regardless of whether they are gay or straight.”

“There is no reason behind it that’s based on science,” Schakowsky said.

We introduced Schakowsky to Barron and Seelnach. And they are all hopeful for some change.

“I didn’t realize that here were really awesome people in our corner who were willing to work on this,” Barron said.

“We really need to make progress, and what you are advocating is to help,” Schakowsky said.

House Resolution 989 was referred to committee.

Schakowsky is hopeful that the blood shortages caused by the pandemic will push legislators to pass it.