BARRIE -- As Canada’s two most populous provinces grapple with a surge in COVID-19 cases, concerns are swirling over whether new restrictions could be imposed before the holidays.

On Saturday, 1,512 new COVID-19 cases were detected in Quebec, marking the highest single-day tally in the province since April.

A total of 1,234 new cases were reportedin the provinceon Tuesday.

On Tuesday, Ont.officials said 928 more people had tested positive for the virus.

He told CTV’s Your Morning that in some places, the increase in case counts has already resulted in additional restrictions.

“You’re already seeing it in say Windsor-Essex – they’ve reduced their capacity in restaurants by 50 per cent,” Manuel said Tuesday.

He said in Ontario, a lot of the places hardest-hit are rural communities outside of the greater Toronto area.

“In many places across Canada, we’re getting cases above 100 cases per million per day,” Manuel said. “That’s often when public health can’t keep up anymore with contact tracing and starts to think about more restrictions.”

To date, 76 per cent of the Canadian population are vaccinated against the virus.

Asked whether the vaccination rate means Canada could see less extreme measures, should they be reintroduced, Manuel said it “helps tremendously.”

“We’re following Europe,” he said. “Europe has about the same vaccination rate as us and many countries, they opened up quite quickly later in the summer or in the fall, and their cases went up quickly, and now they’re imposing restrictions and some of those countries are imposing more severe restrictions than we have in Canada.” 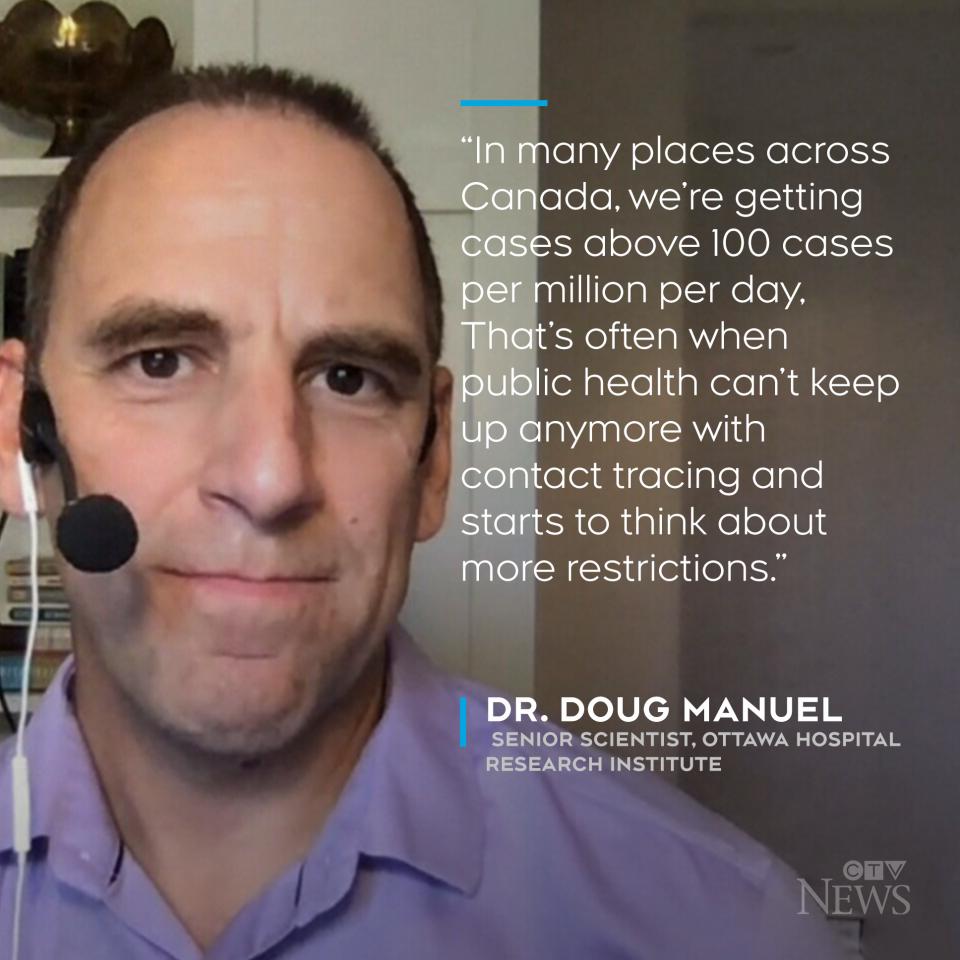 “But that doesn’t mean that we have to have full restriction like we’ve seen in the past,” he said.

Ultimately, Manuel said things are dependent on what happens with the Omicron variant.

The variant -- first detected in South Africa -- has caused global panic. Several countries, including Canada, have imposed more stringent travel restrictions in a bid to keep the disease outside of their borders.

However, by Monday, at least 23 cases of the Omicron variant had already been detected in Canada.

Manuel said he expects Omicron will “take over as the dominant strain worldwide, sooner than later.”

He said researchers are waiting for more data from South Africa, to determine whether those who have been infected with the Omicron variant experience more severe symptoms.

“The hospitalization rates are starting to go up there quite quickly,” he said. “But we’re still hearing that people in hospital are less severe than they’ve seen in the past.”

He said “for sure it’s more transmissible.”

“It will likely take over very quickly, and the only question is as it comes in quickly, will that result in increase hospitalizations and deaths?” he continued. “That will dictate what we do moving forward.”

WHAT HAVE PROVINCIAL AUTHORITIES SAID?

Health officials in both Ontario and Quebec have suggested new restrictions are not in the immediate plans.

“If we see widespread presence of Omicron across Ontario, which is not the case at present, then we could review any measures that we need to take at a provincial level.”

He said, though that he doesn’t have a “crystal ball.”

Moore said if it’s a “less lethal virus,” has less impact on the province’s hospital sector and vaccines continue to work against it, “we will continue our current strategy and not have to have any further public health restrictions.”

However, on Tuesday, officials in Ontario did announce the pause on moving to the next step of reopening plans would continue indefinitely.

Next week, capacity limits were supposed to be lifted in some high-risk settings where proof of COVID-19 vaccination is required.

However, that was delayed last month due to a surge in cases.

In new modelling released by the Science Table COVID-19 advisory for Ontario on Tuesday, researchers said cases are rising in “most public health units” across the province due to the Delta variant.

“Testing has not increased, but positivity is rising,” the updated projection document reads. “This is a real rise in cases.”

The scientists said modelling shows that, even without the Omicron variant, occupancy in intensive care units at hospitals in Ontario is expected to climb to between 250 and 400 by January, putting hospitals under strain once again.

“We can’t predict Omicron precisely, but it will almost certainly hit us hard and fast,” the scientists said in a series of tweets on Tuesday. “Cases are rising, even without much Omicron yet. Our hospitals and ICUs are feeling pressure again. We need to increase vaccination and we can’t let up on public health measures.”

Meanwhile in Quebec, officials announced Tuesday that gatherings of up to 20 vaccinated people will be allowed in private homes beginning on Dec. 23.

Currently only 10 people from no more than three households are allowed to gather in homes.

“I know Quebecers well enough to know that there are many people fed up with the current measures,” he said. “We don’t like the trend, but it’s under control.”

Legault said as long as hospitalizations “stay at low levels, it remains under control.”

With files from CTV's Katharine DeClerq and Sean Davidson, and The Canadian Press

Indigenous papal visit postponed to 2022 amid concerns around Omicron

Quebec to allow gatherings of 20 people in homes starting Dec. 23

P.E.I. reports five new cases of COVID-19 Tuesday, three under the age of 12

Human trials to begin on made-in-Canada COVID-19 vaccine you inhale, not inject