The blacklegged tick population is creeping northward into Canada, and with it climbs the risk of contracting Lyme disease.

York University researchers are warning that climate change is causing the country to become increasingly habitable to the blood-sucking bugs, which migrate by clinging to travelling birds and deer.

Jianhong Wu, the director of the York Institute for Health Research, says the tick population will grow exponentially in the coming years in many parts of Ontario.

Over the next 60 years, his team forecasts a huge growth in tick populations in the United States. The range of habitat will also expand substantially in Western Canada and grow further north in Ontario, Quebec and the Maritimes, Wu says.

His team created a series of heat maps depicting the current and predicted rate of population increase. 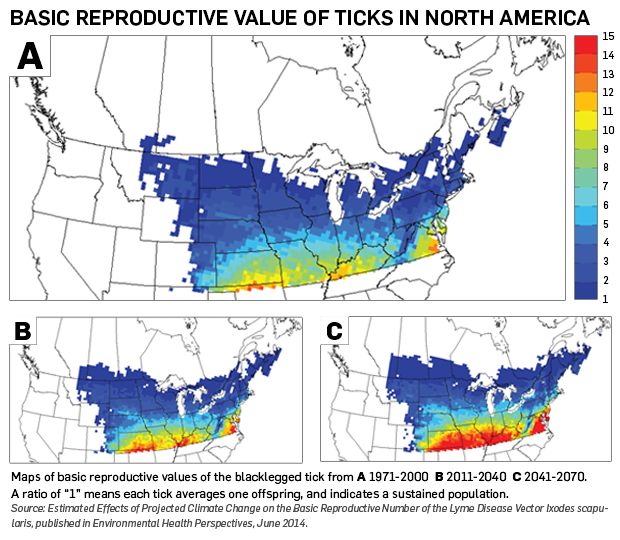 Wu says a value of “1” on the map is the equivalent of two parents having two children – the ratio stays even, and growth is sustained, but not increasing. If every parent has four offspring, for example, the ratio would be “2” and the population would effectively double.

According to Wu’s predictions, though the tick populations will be mostly sustained in Canada, its presence will still be an issue.

“The tick is going to expand its range,” he says. “Diseases from ticks are going to become a problem.”

Health officials in Toronto have recently sent ticks found in the city off to the National Microbiology Laboratory in Winnipeg to be tested for Lyme disease. Toronto Public Health also sent out a letter to parents on Thursday, caution students planning to partake in outdoor activities in wooded or bushy areas.

“Finding blacklegged ticks in multiple locations in the city suggests these ticks are becoming established in Toronto,” reads the letter, signed by medical health officer David McKeown. “However, the risk of Lyme disease in Toronto is low and the vast majority of ticks are not infected.”

Though the risk in Canada is still relatively low, Jean-Paul Paluzzi, an assistant professor at York who studies blood-feeding arthropods, says anyone who comes into contact with a tick is at risk. 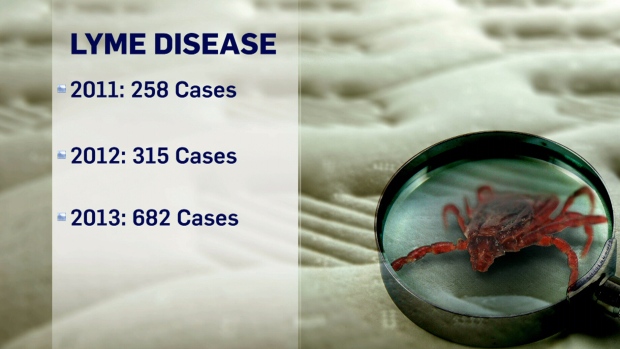 “The issue right now is that in Ontario, and more broadly in Canada, the physicians are following protocols that myself and others believe are hugely outdated,” he says. “A lot of patients are being misdiagnosed in a sense that they are being told they don’t have Lyme disease.”

Paluzzi says physicians rely on ELISA -- enzyme-linked immunosorbent assay – to detect the bacterium that causes the disease. But he says the test is notorious for false negatives, meaning many patients struggle to get an accurate diagnosis.

“Unfortunately the bacterium is pretty good at being cryptic, and it doesn’t always expose itself for detection through the ELISA technique,” Paluzzi says.

Since identifying and treating the disease is difficult and sometimes costly, Toronto Public Health recommends those who plan on spending time in forested areas take preventative measures against contracting tick bites.