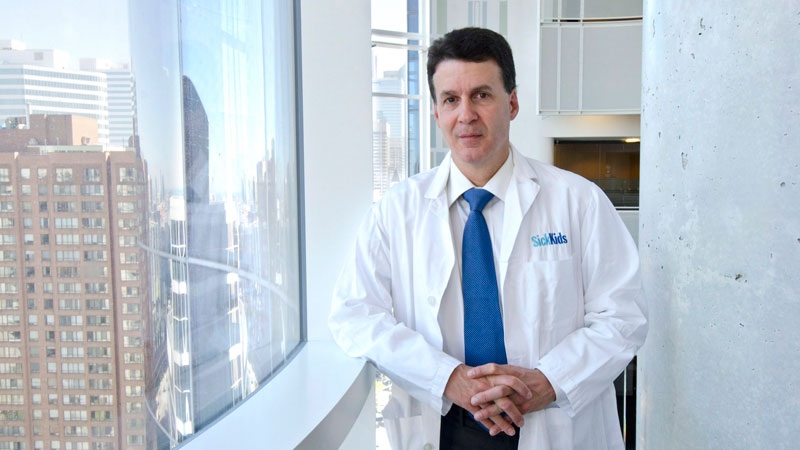 TORONTO - Cerebral palsy, the most common cause of physical disability in children, has long been thought to result from brain injury in the fetus. But new Canadian research is challenging that notion, finding that at least one in 10 cases likely has an underlying genetic cause.

"Our findings were shocking, actually," said principal investigator Stephen Scherer, director of the Centre for Applied Genomics at Toronto's Hospital for Sick Children.

So ingrained has medical dogma been around the root causes of cerebral palsy that "when I showed the results to our clinical geneticists, initially they didn't believe it," he said.

About two in every 1,000 babies born are affected by cerebral palsy. An estimated 50,000 Canadian children and adults have the condition, which leads to varying degrees of motor impairment, including muscle spasticity and involuntary movements.

Symptoms can include epilepsy as well as learning, speech, hearing and visual impairments. Some with the disorder are mildly affected, while others can't walk or communicate.

Traditionally, cerebral palsy was believed to be caused by a stroke or infection of the brain in the developing fetus, or by birth asphyxia - a lack of oxygen to the infant during delivery.

But genetic testing of a group of affected children from across Canada found that in 10 per cent of cases, structural changes to the DNA appear to have given rise to the condition.

The research team, which includes physicians at the McGill University Health Centre in Montreal, performed genome sequencing tests on 115 children with cerebral palsy and their parents.

Ten per cent of the children were found to have DNA alterations known as copy number variations, or CNVs, that affect clinically relevant genes. CNVs can be present as deletions, additions or reorganized segments of DNA that can lead to disease.

"In five per cent, we found these spontaneous, massive changes," affecting dozens or even hundreds of genes in some children, said Scherer. "For five per cent, these big changes are the cause of their CP.

"The other five per cent were smaller changes, but affect lots of genes and in some cases were inherited from the parents. And we think they're involved in the medical complexities these kids have."

The study, published Monday in the journal Nature Communications, also shows there are many different genes involved in cerebral palsy, just as there are in autism spectrum disorder and other neurodevelopmental conditions.

"I think what's really interesting here is that what was thought to be an almost entirely environmental disorder (caused by fetal injury or infection) has a significant genetic component," said Scherer.

"I can't imagine having a child who's got any disorder and not having some type of an explanation (as to why)," he said.

"So I think it's pretty exciting that we can actually provide for these spontaneous cases that the parents didn't do anything wrong. They didn't make a wrong decision in their pregnancy or eat the wrong food or expose the fetus to the wrong thing. It was just a random genetic change."

Dr. Maryam Oskoui, a pediatric neurologist at Montreal Children's Hospital and a study co-author, agreed parents want to know what caused their child's cerebral palsy, but often they don't have a clear explanation.

"For most kids we can find some risk factors - you were born early or you were exposed to this or that - but they're always left kind of wondering: 'If I had done something differently ...' Knowing is a big part of the process of dealing with such a diagnosis."

Genetic testing of children with CP is not recommended by the American Academy of Neurology, which provides guidelines for doctors, nor is such sequencing commonly conducted, Oskoui noted.

But given their findings, the researchers are calling for genetic testing to be a routine part of the CP diagnostic process.

Such DNA sequencing would also tell parents if they carry genetic anomalies that could be passed on to future children, Scherer noted.

Emily Diamond's son Bennett, 4, was diagnosed with cerebral palsy at six months after she noticed he wasn't developing in the same way as her first two children.

"I was trying to teach him to sit and I couldn't straighten his legs," Diamond said from her Montreal home. "He didn't bring toys or the facecloth in the bath to his mouth, as most kids do. He didn't play with his feet and he didn't babble the same way babies do at that age."

While his diagnosis was a shock, Diamond said she and her husband feel lucky that Bennett isn't worse off. Though he doesn't walk or speak, he has no epilepsy, doesn't need a feeding tube as some CP kids do, and appears to be unharmed intellectually.

Bennett wasn't part of the study, so he hasn't had his genome sequenced, said his mom, who was told by doctors that his cerebral palsy was likely linked to a ruptured abdominal aneurysm she suffered during her second trimester that required emergency surgery.

"So I don't know if he has any of these genetic markers or not," she said. "At the same time, there's something specific (the aneurysm) they can point to.

"Unfortunately, there are parents out there who have no idea - there was no prenatal event, no trauma during birth, yet their children have CP. So they're left in the dark as to what happened.