'Birth tourism' rising fast in Canada; up 13 per cent in one year

TORONTO -- Canada’s reputation as a hotspot for birth tourism is rising fast, with new data reporting a 13 per cent increase in one year.

“It’s going up faster than immigration rates, faster than the overall population of Canada,” Andrew Griffith, a fellow at the Environics Institute and the Canadian Global Affairs Institute, said in a telephone interview with CTV News.

Birth tourism is the practice by which babies are born in Canada to non-residents so they can receive automatic citizenship without having to go through standard immigration processes. Griffith follows the phenomenon closely as part of his research.

The 13 per cent increase was found in data Griffith collected from the Canadian Institute for Health Information (CIHI), which based it on information from hospitals across the country, excluding Quebec. 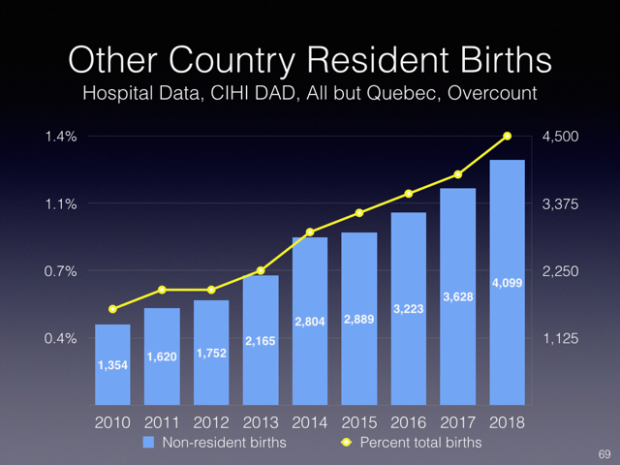 While some of the reported births involve international students and non-residents transferred to Canada for work, Griffith said he believes the majority of these cases involve mothers who travelled to Canada for the express purpose of giving birth.

“The laws were never intended for people to fly in and fly out,” he said.

Under Canadian law, children born in the country are automatically registered as citizens of Canada. This entitles them to Canadian post-secondary tuition rates, which are lower than what non-resident students pay, and allows them to sponsor their parents to come to Canada.

Brokers advertise Canada as one of the few developed countries in the world that offers unconditional citizen to babies of parents who are not citizens. Some immigration brokers explicitly note that children born in Canada will be able to enjoy benefits such as free education and other social programs, as well as travel to the country visa-free.

WHERE IS IT MOST PREVALENT?

According to CIHI, the 10 hospitals where non-resident births make up the biggest proportion of total births are all in Ontario and B.C. 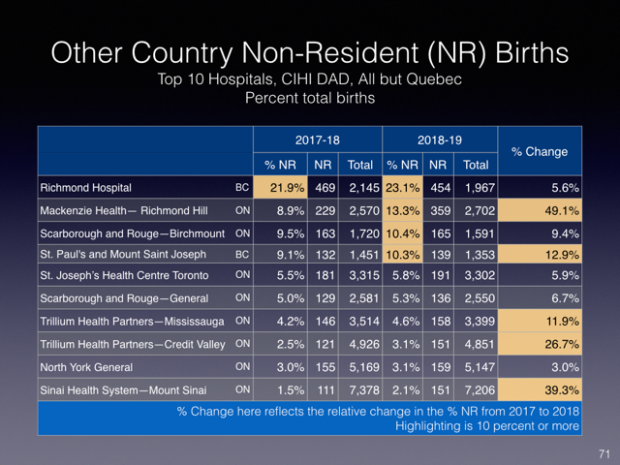 Dr. Fiona Mattatall, a Calgary-based obstetrician and gynecologist, has noticed a similar trend in her province. CIHI reports that there were 263 non-resident births in Alberta in 2018 – a 13 per cent increase over the previous year, and more than triple the number recorded in 2010.

“(The data) mirrors what we see on the front lines,” she said.

Mattatal said non-resident births lead to ethical disagreements and practical concerns, in part because hospital budget planning does not take these births into account.

“Our system is not built to provide services (for) people (from) out of the country,” she said.

“I’m worried as someone in the health-care system, we are already dealing with cutbacks. (Birth tourism) is causing strain in the system, and we are helpless to do anything about it.” 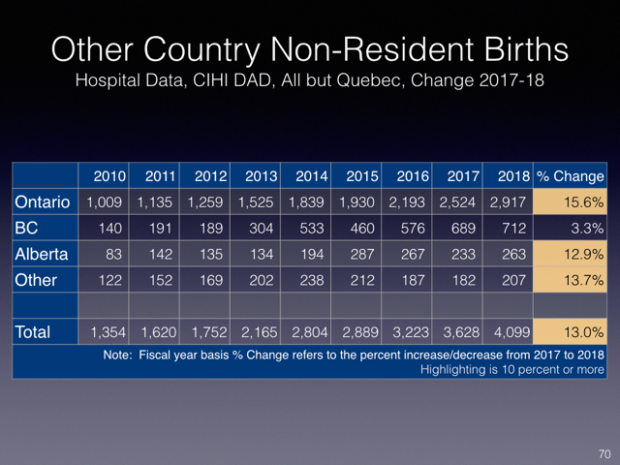 Sometimes hospitals find themselves unable to collect payment for maternity services, and have to hire collection agencies to go after the mothers.

“This is going to be an issue Canadians are going to have to discuss,” Mattatall said.

According to an Angus Reid survey taken in March, 64 per cent of surveyed Canadians say a child born to parents who are in Canada on tourism visas should not be granted Canadian citizenship. Sixty per cent say they want to see laws changed to discourage birth tourism.

In a bid to discourage the practice, Hospitals in Calgary instituted a new policy this summer. Non-residents are now told to pay a $15,000 up-front deposit for prenatal delivery and postnatal care. Additional charges are also levied for hospital services.

Mattatall said the deposit requirement made a difference at the one hospital that tested it out, although she suspects non-resident mothers may have simply moved to other hospitals.

A wider-scale solution could be to end birthright citizenship entirely, as U.S. President Donald Trump has said he will do in the United States. Australia has also introduced more stringent requirements, only granting citizenship when children born in that country have at least one citizen or permanent resident parent – and even then, the child must live in Australia for 10 years after birth.

Canadian Conservative Party members voted at a convention last year to make a ban on birthright citizenship to babies born to non-resident parents party policy, but the issue has not been raised since the election was called.