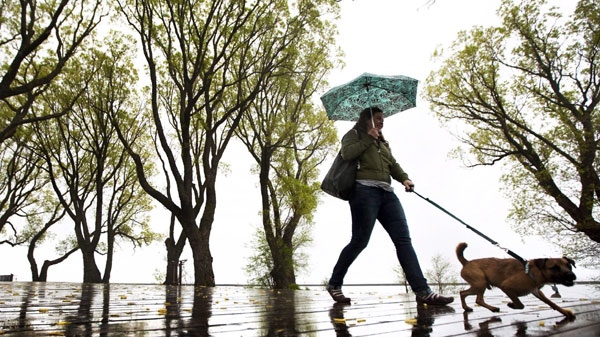 A woman shields herself from rain under an umbrella while walking her dog along Toronto Lakeshore on Saturday, May 14, 2011. (Darren Calabrese / THE CANADIAN PRESS)

You don’t have to run marathons or do circuit training in order to reap the health benefits of exercise. A large new study concludes that any kind of physical activity, including walking and housework, can prevent heart disease and early death.

The Prospective Urban Rural Epidemiology (PURE) study, led by the Population Health Research Institute of McMaster University and Hamilton Health Sciences in Hamilton, Ont., found that any activity of 30 minutes per day, or 150 minutes per week, is beneficial.

If you can’t make it to the gym, walking to work or cleaning your home can still raise your heart rate, the researchers say.

However, nearly three in four people in Canada do not meet the current activity guidelines, said Scott Lear, the study’s principal investigator and a professor at Simon Fraser University in Vancouver.

The key is to incorporate physical activity into daily life, he said in a news release.

“Going to the gym is great, but we only have so much time we can spend there. If we can walk to work, or at lunch time, that will help too.”