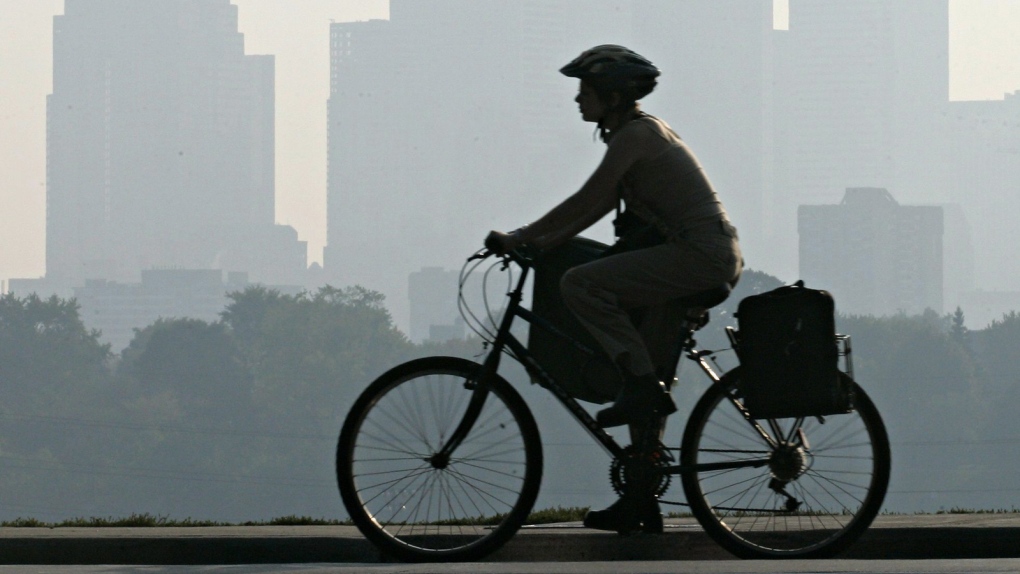 A woman cycles past the downtown Toronto skyline as smog hangs over the city on Tuesday, Oct. 4, 2005. (THE CANADIAN PRESS/Adrian Wyld)

FREDERICTON -- A new report that studies the impact of air pollution on life expectancy suggests Canadians who live in areas of higher pollution have an increased risk of dying from conditions such as diabetes.

The study, conducted by more than a dozen Canadian researchers, tracked data gathered from more than 2.5 million Canadians during a 16-year period between 1991 and 2006.

Dan Crouse, an epidemiologist and sociology research associate at the University of New Brunswick, said the data unsurprisingly shows that risk of dying is about eight per cent higher in places with average levels of pollution than in places with low levels.

But he said it was the causes of death that were noteworthy.

"The cause of death with the highest risk estimate was diabetes, which was an 18 per cent increased risk of dying, ischemic heart disease about 14 per cent," he said.

"Notably, we really didn't find any increased risk of dying from respiratory disease."

The report released Monday doesn't explain how the increased pollution levels contribute to death from diabetes or heart disease, but Crouse said researchers will be examining the data for many years to come.

"The data set is so large I could keep working on it for the rest of my career," he said.

The study, published in this month's issue of Environmental Health Perspectives, is the first to show risk estimates associated with the combined exposure to multiple pollutants, such as fine particulate matter, ozone, and nitrogen dioxide.

The researchers took the information provided by 15 per cent of the Canadian population between 25 and 90 years of age on the long-form census forms in 1991 and tracked them for 16 years.

Crouse said about 301,000 of the subjects died during the 16 years of follow-up.

He said they used information from the Canadian Mortality Database and compared the information to their census and follow-up data to determine where the people had lived, also adjusting for factors such as age, sex, marital status and median household income.

Crouse said while urban areas tend to have greater air pollution, it is just one of many risk factors that can affect life expectancy.

"I don't want the message to be move away from the downtown," he said.

The release of the study coincides with the relaunch of the Project Big Life calculator, an online tool that allows users to calculate life expectancy.

He said it's a good way to show how the science affects each person's life.