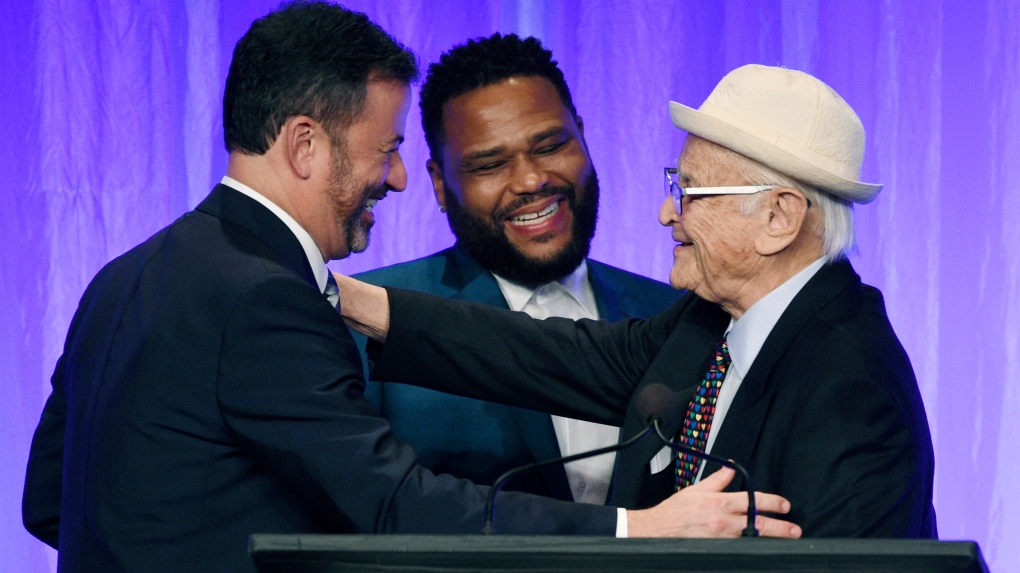 BEVERLY HILLS, Calif. -- "There's nothing I believe more than this, that laughter adds time to one's life," Norman Lear told an audience gathered to honour him and other four other television comedy greats.

"I believe that as much as I believe my mother loved me," the writer-producer added. "She said she did. But I wasn't sure."

Like the 97-year-old Lear, who made his name -- and TV history -- with groundbreaking sitcoms like "All in the Family" and "The Jeffersons," the other honorees at Thursday's Paley Center for Media ceremony proved that talent is ageless. Carl Reiner, 97; Bob Newhart, 90; Carol Burnett, 86, and Lily Tomlin, 80, each won over the room with their humour and memories.

"Guess this is a hell of a time to tell you no, we're not coming to your Christmas party," Newhart teased Conan O'Brien after the late-night host introduced him as "one of my all-time comedy heroes."

"He pulls off the hardest kind of comedy -- timeless, human, clean and subversive. And he makes it all look effortless," O'Brien said of Newhart.

The onetime accountant became an instant sensation in 1960 with his debut album, the Grammy-winning "The Button-Down Mind of Bob Newhart," scored sitcom hits with "The Bob Newhart Show" in the 1970s and "Newhart" in the '80s and won an Emmy as Professor Proton on "The Big Bang Theory."

The sentimental moments included Rob Reiner's introduction of his father, the writer-actor-producer whose TV career stretched from the 1950s variety series "Caesar's Hour" to creating "The Dick Van Dyke Show" to a recent role in "Angie Tribeca."

"This is the nicest thing, to be able to do this for my dad," said the younger Reiner, who gave him an arm for support as they walked onto the hotel ballroom stage at The Paley Honors: A Special Tribute to Television's Comedy Legends.

Carl Reiner, who credited a government-supported acting program with his childhood start in entertainment, charmed the audience by reciting lines from a Shakespeare soliloquy he learned as a kid and sharing an anecdote about another TV comedy force, Jack Benny. He called his children and grandchildren his greatest pride.

Carol Burnett was introduced by Kristin Chenoweth, who lauded the singer-actress-comedian as one of the few who can do it all and always "with such heart."

Burnett, who starred on Broadway, as well as TV, recalled what preceded the 1967 arrival of "The Carol Burnett Show."

"As a woman in this business, it wasn't always easy to do what the naysayers said couldn't be done," she said. When she sought to exercise a contract clause with CBS for an hour-long variety show, Burnett said an executive told her, "and I quote, `It's not for you gals."'

She punctuated the story with a derisive "huh." Her long-running show won armloads of Emmy Awards on CBS.

Tomlin, whose parade of characters made her a hit on "Rowan & Martin's Laugh-In" and who stars opposite Jane Fonda on "Grace and Frankie," was self-effacing, saying she couldn't match Newhart's "sterling one-liners." Instead, she delighted the audience by reciting some of her characters' catchphrases, including telephone operator Ernestine's "one ringy dingy."

"I'm so grateful for this great, great honour," Tomlin said.

Lear was introduced by "black-ish" star Anthony Anderson, who said Lear's work forced audiences to confront difficult issues while shedding light on common bonds, and by late-night host Jimmy Kimmel, who said the producer used laughter to challenge "us to make progress."

"Bless you all, thank you. Let me continue," he said, smiling.