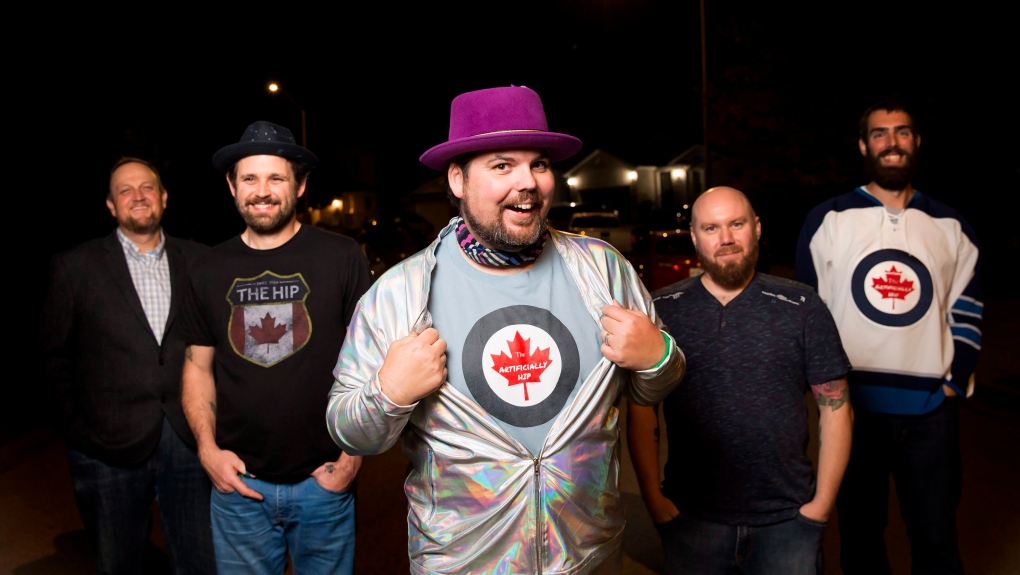 CAMBRIDGE, Ont. -- Lead singer William Bishop doesn't look a thing like Gord Downie, which might be considered a setback for any tribute band trying to emulate the Tragically Hip.

He rocks a full beard, has a thick head of hair and his build is larger than Downie's frame ever was. Somebody once told him he looked like Steven Page quit the Barenaked Ladies to join the Hip.

Yet the lead singer of the Artificially Hip takes those remarks in stride. When his Hip tribute band performs they're focused on more than just appearance.

And that's where Bishop shines as he channels Downie's unmistakable persona while his band rehearses among the basement furniture of a suburban house in Cambridge, Ont. He hugs the microphone stand in the way Downie often did, pausing to throw his hand on his hip in contemplation, another of the singer's trademark moves.

Then he launches into the mid-song banter that Downie made his own.

The Artificially Hip are one of a number of Tragically Hip tribute acts performing in the coming days to mark the first anniversary of Downie's death on Wednesday.

Pubs and concert halls nationwide have booked pseudo-Hip performers for the occasion, including Practically Hip (Toronto), the Fabulously Rich (Charlottetown), the 100th Meridian (Saskatoon) and Way 2 Hip (Ottawa) to name a few.

More than 15 Tragically Hip cover bands are active across the country playing music festivals and local bars each month.

They walk a careful line between honouring one of Canada's most respected bands and profiting off their legacy -- a balance that's even harder to strike knowing the untimely death of the Hip's lead singer at 53.

Many formed years before Downie revealed he was facing terminal brain cancer in 2016, but in some cases the newer bands were built on a shared love for the Hip after they returned to the national conversation.

Toronto outfit the Fabulously Hip surfaced around the same time fans were pulling out their CDs to revisit longtime favourites, like "Ahead By a Century" and "Blow at High Dough."

Lead singer Alan Ribeiro says he covered Hip's songs at his own shows for years, but the idea of a cover band only took shape when it became impossible to ignore the pent up demand at Canadian bars.

"In a way, the cover bands are filling that need."

Ribeiro feels the eager demand every time the Fabulously Hip is booked for a bar show or a rib fest. During the band's most recent gig in Keswick, Ont., he says the crowd was dancing to every song and some people even jumped on stage and sang along with him.

"I'd like to think if you came out to one of our shows you'd be seeing the closest sound to the Hip without actually having the Hip," he says.

"But I'm trying hard not to really be Gord Downie on stage."

Back in the suburbs, the Artificially Hip seems to be taking a slightly different approach to Downie in their rehearsals.

At one point, Bishop slips into a shiny metallic suit and dons a purple feathered hat designed by Karyn Ruiz, the woman who made the real Downie's iconic head gear for the band's final Canadian tour.

When he plows into the "happy hour" refrain on the Hip's "Little Bones" it's uncanny how closely his voice resembles Downie's growl.

For a moment it feels like Canada's rock poet has returned, though Bishop insists he's not doing a straightforward impersonation to avoid being considered "disrespectful."

"We all agreed it was important to take it seriously and not stray into exploitative territory," he says.

"The trick is to look for hallmarks in his performances and pull them out so hardcore fans see it and go, 'Oh yeah, I remember when Gord did that."'

Some nights he'll dive into the "Killer Whale Tank" rant from a live version of "New Orleans is Sinking" that was traded as a cassette bootleg between the Hip's most steadfast supporters in the 1990s. When he's not feeling it, he substitutes that monologue with lines from Kevin Smith's "Mallrats" -- an idea he came up with on his own.

"I'm always thinking about what I can add to this that would be in the spirit of Gord Downie," Bishop explains.

"If I decide I want to sing 'The Littlest Hobo' theme in the middle of 'The Luxury' then I'm gonna. To me it's funny, and I think an audience might react to it. I'm just trying to amuse myself, make these guys laugh, and make the audience have a good time."

The Artificially Hip recognize the loose interpretation might not suit every Hip fan, but they hope their spirit is fully and completely relatable. The band donates one-sixth of their profits to the Gord Downie Fund for Brain Cancer Research at Sunnybrook Hospital in Toronto.

"It's beyond just five guys getting together and having a good time playing some of our favourite songs," Bishop says.

"There's an invisible sixth member that's pushing us along."

Backing philanthropic causes was always an important part of Downie's life, and several Hip tribute bands are trying to fill the void he's left behind. Many of their event posters prominently feature causes the singer supported, with a portion of each night's ticket sales going to a particular charity.

Richard Kyle, a Bobcaygeon, Ont.-based guitarist for the Tragically Hits, is talking with other bands about going the extra mile by recording an album of Hip covers. The proceeds would be donated to three causes Downie supported most -- Sunnybrook, the Gord Downie & Chanie Wenjack Fund and the Lake Ontario Waterkeeper group, which works to protect the Great Lakes.

"You are playing their music, you are making money. You should be doing it for some kind of purpose other than to line your pockets and bask in a glint of their glory," he says.

"We need to keep Gord's message going -- that should be the focus for all of the bands."