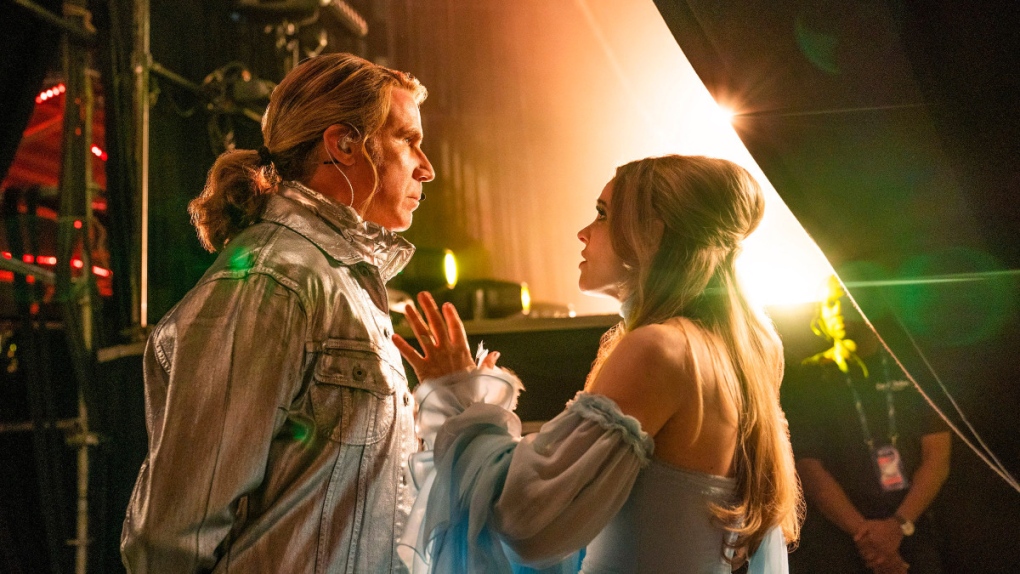 In this image released by Netflix, Will Ferrell, left, and Rachel McAdams appears in a scene from 'Eurovision Song Contest: The Story of Fire Saga.' (John Wilson / Netflix vi AP)

Will Ferrell is a wonderfully weird and committed actor. Like a dog with a bone when he latches onto a part he doesn't let go, come hell or high water. When it works, it really works, and the result is an indelible comedic creation like the deluded Ron Burgundy that not only makes us laugh, but also reveals the character's humanity. When it doesn't work, as in "Eurovision Song Contest: The Story of Fire Saga," now streaming on Netflix, it is all commitment and little humanity.

Ferrell plays Lars, a middle-aged Icelander whose love for the Eurovision Song Contest began in 1974 when he was dancing in front of the TV to ABBA's winning performance of "Waterloo," much to his father's (Pierce Brosnan) chagrin. No one believes in his musical dreams except for his childhood friend Sigrit (Rachel McAdams), who loves him even though her affections don't seem to be reciprocated. She believes in elves and drops little pearls of wisdom like, "Anger cannot churn butter."

Together they are Fire Saga, a synth-pop duo who play to crowds at the local pub who only want to hear songs like "Ja Ja Ding Dong," and not the "real music" Lars writes. Through a series of unlikely events they stumble into a spot on the Eurovision show. Lars' father doesn't want them to go. "All of Iceland will laugh at you," he says. Undeterred, Lars soldiers on. "I have to become an international star to prove to my very handsome father and all of Iceland that I have not wasted my life."

Lars and Sigrit's experiences in their tiny fishing village of Húsav´ík do not prepared them for the cutthroat world of Eurovision. Will predatory singers, like Russian superstar Alexander Lemtov (Dan Stevens with a George Michael frosted-tip bouffant), and stage mishaps dampen Lars' dreams of Eurovision fame?

"Eurovision Song Contest: The Story of Fire Saga" should be a lot funnier than it is. It's a little too loving of Eurovision's kitschy spectacle to be a satire; a little too sincere to be truly silly, despite Ferrell's ridiculous hair and even more outlandish sweaters. The comedy is further blunted by the film's main conceit: that Lars and Sigrit are talentless wannabees. "We all know they are awful," says the local Húsav´ík cop, "but they are our awful." Thing is, in context, they fit like a puzzle piece next to other over-the-top acts the movie showcases.

Ferrell brings the usual commitment to his trademarked arrogant man-child character, but never pushes the characterization much beyond the way the townsfolk see him. "Lars is weird," they all say, and Ferrell obliges, playing the character as the result of a damaged psyche — he feels unwanted by his father — and just a little too much confidence. It's familiar ground for him and us.

McAdams feels like an odd choice to play opposite Ferrell's exaggerated character. She's good, but her more natural performance feels like it belongs in another movie.

The real Eurovision Song Contest won't be happening this year, another victim of COVID-19, so perhaps "The Story of Fire Saga" will fill that gap for fans. If you tune in expect some scattered good moments. Ferrell delivers a few laughs and Stevens has fun, but Lars and Sigrit's protracted love story pushes the movie to an unwieldy 123 minutes with not quite enough laughs to justify the running time. 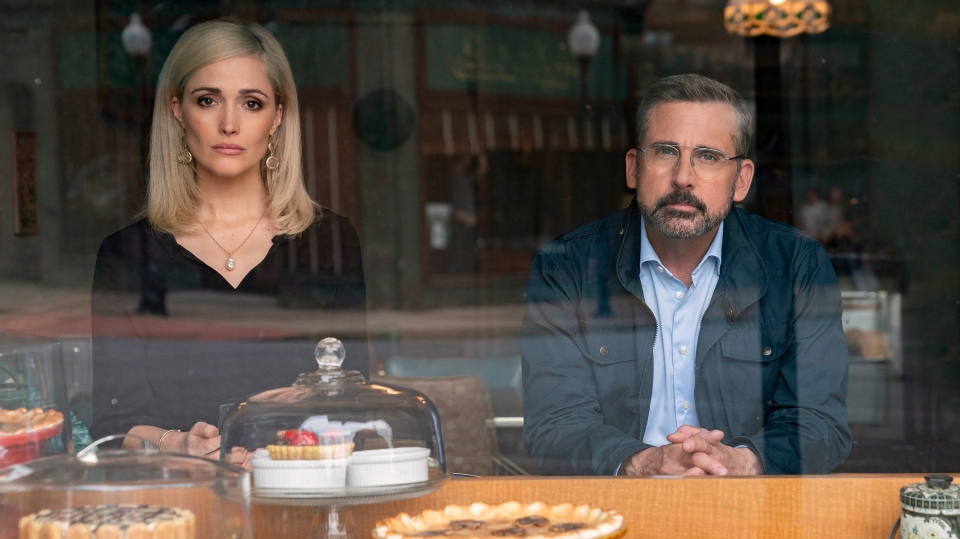 In the midst of creating a strategy to win votes in America’s Republican heartland—"We need some way to road test a more rural friendly message,” he says.—he’s directed to a YouTube video of retired Marine colonel Jack Hastings (Chris Cooper), giving an impassioned speech in defense of undocumented workers at a townhall meeting in Deerlaken, a small right-wing Wisconsin town.

He’s like “John Wayne and tractor had a baby,” says Gary as he concocts a plan to entice Hastings to run for mayor of Deerlaken, giving the Dems a strong presence in a state sea of red.

“Colonel Jack Hastings is our key back into the swing state of Wisconsin,” Gary says. “He just doesn’t know it yet.”

The citified Gary takes off his suit and tie, buys some dungarees and jumps on a private jet to Deerlaken to win over the colonel and his daughter (Mackenzie Davis), who is first seen with her arm inserted where the sun don’t shine, giving relief to a constipated cow. Appealing to Hastings’ sense of duty, Gary convinces the Marine to run and fires up the political machine.

“Twenty bucks says I do better with fear than you do with shame,” she says, taunting Gary. Soon the national media takes notice and the mayoral race in Deerlaken becomes one of the most debated elections in the country.

There’s more, but that would involve giving away a plot twist and spoilers. Just keep in mind that the word “resist” is tucked away in the film’s title.

“Irresistible” is equal parts heartfelt and darkly humorous. Stewart begins conventionally enough, with the fish out of water story of bigshot Gary in a town of rubes, then slowly calibrates the story to ask, “Who are the real rubes here?”

It’s a damning indictment of how political situations are manipulated, how the media allows outright lies on the airwaves, and how both Democrats and Republicans are culpable and clueless to the real needs of the people.

It doesn’t exactly blaze new ideological ground but the as a reminder of why the political system is twisted and broken, it’s a timely tale. 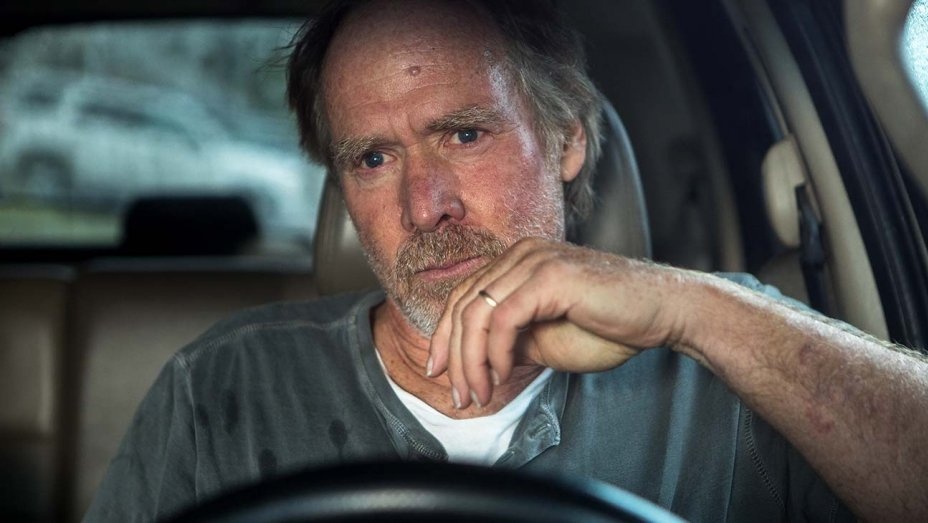 “Hammer,” a new VOD thriller starring Will Patton, uses many of the genre’s puzzle pieces but rearranges them in a new and interesting way.

Chris (Mark O’Brien) is having a very bad day. Estranged from his parents and deep in debt to some very bad people, he arranges a deal with an old associate, Adams (Ben Cotton). They arrange to meet on a rural road to exchange $200,000 in cash in return for drugs. The deal goes wrong, bullets are fired. Adams (Ben Cotton) and his girlfriend Lori (Dayle McLeod) are wounded as Chris, covered in blood splatter, makes a getaway on a motorcycle with the drugs and money.

As he speeds through town, his father Stephen (Will Patton), out doing errands, spots him and immediately knows something is wrong. The situation escalates as Adams, looking to find Chris and the stash, grabs Chris’ younger brother Jeremy (Connor Price) as a hostage.

Just after everything goes sideways in Chris’ life director Christian Sparkes stages a scene in a cornfield that tells us everything we need to know about Chris in one potent image. Hidden among the plants is a snake devouring itself. It’s a quick shorthand for the cyclical nature of Chris’ self-destruction.

He’s been in trouble before, and the imagery suggests the pattern will continue, even if he makes it out of this scrape alive. It’s details like this that elevate a standard crime drama, complete with crooked ex-colleagues, innocent family members and bad debts, from the same-old to something new.

But it is the father and son relationship that gives the movie its momentum. It asks, and mostly answers, big questions about unconditional love and how far a father will go to help his son. Sparkes builds tension all the way through the tight eighty-minute running time but never forgets to allow the relationship between the father and his ne’er do well son to slip from the forefront of the storytelling.

“Hammer” is an engaging and offbeat thriller that makes the most of its lead performances. O’Brien manages to make Chris almost likable despite his constant foul-ups and Patton, as a father caught up in a breathless situation, is all strength and goodwill, even when he’s doing terrible things. Why this wasn’t released on Father’s Day I’ll never know. 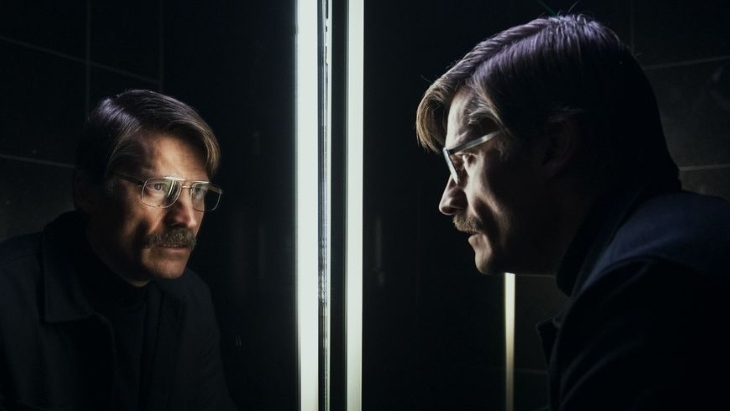 The name “Exit Plan” sounds like one of those 1990s direct-to-VHS action titles that might have starred Don ‘The Dragon’ Wilson or someone with a famous last name like Don Swayze, Frank Stallone or Chad McQueen. That this movie, new to VOD this week, stars Nikolaj Coster-Waldau, he who played Jaime Lannister on the blood-soaked “Game of Thrones,” would further suggest chills and thrills.

Instead, it is an anti-action, minor key movie. A film so stark and dreary that you might want to plan to hit the exit button on your remote.

Coster-Waldau plays Max, a mild-mannered insurance investigator who shares his life with wife Laerke (Tuva Novotny) and cat Simba. His latest case, the disappearance of man, presumed dead, leads him to a place called the Hotel Aurora, a Scandinavian resort where people go to meet their “beautiful end.”

It’s a fortuitous turn of events for Max, whose attempts to hang and drown himself were unsuccessful. He’s suffering from an inoperable terminal brain tumour and wants to end it all before the pain becomes too much for him and his family to bear.

But, what seems to be the answers to his problems raises some very troubling questions in Max’s mind.

“Exit Plan” deals in some heavy human dilemmas, but is as cold and angular as the glass and steel that make up the façade of the Hotel Aurora. The mix-and-match of real and illusory makes Max’s existential crisis hard to grasp, impossible to care about.

Even the meaning of a late-stage mystery twist, as Max decides he wants out of the hotel, is obscured by flashbacks and dream sequences, leading to a conclusion that promises to make a point but fails to deliver. Add to that obtuse dialogue like, “You can go but you can’t escape,” that sounds like a rough draft of the “Hotel California” lyrics and you have a movie that promises much but delivers very little.