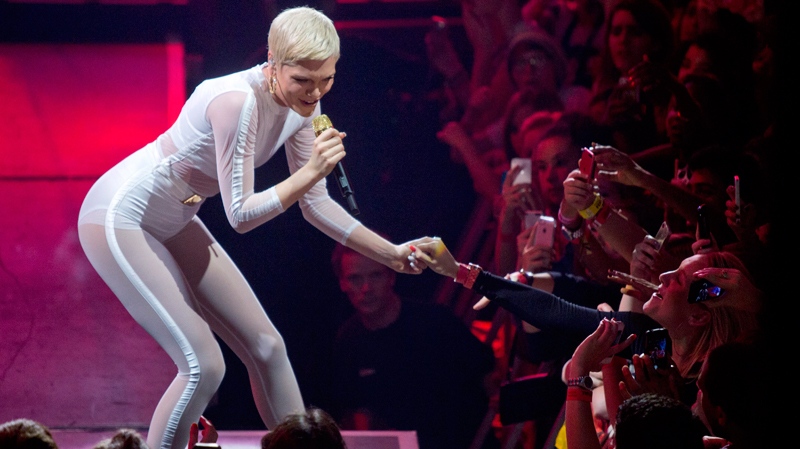 British singer Jessie J reaches out to a fan as she performs on stage as part of the iTunes Festival 2013, at the Camden Roundhouse in north London, Monday, Sept. 23, 2013. (Photo by Joel Ryan/Invision/AP)

NEW YORK -- iTunes is putting its stamp on South by Southwest, piggybacking on the annual event with its own music festival.

The company said Wednesday it will debut its popular iTunes Festival, a free concert series held in London for the past seven years. While the London version is a 30-day event, the U.S. festival will feature five nights of rock, country, pop and hip-hop at South by Southwest, an international showcase for music, film and interactive projects to be held next month in Austin, Texas.

"We're pretty excited about doing this for the first time here in the U.S. at South by Southwest," said top Apple executive Eddy Cue in an interview Tuesday.

"One of the cool things about trying to do the festival is that it's all about the music, the musicians and the fans," Cue said. "You want it in a really close atmosphere where the fans are getting to see these musicians in places they'll never see them again, because they play in much bigger venues."

The iTunes festival will be held March 11-15 at ACL Live at the Moody Theater, where Austin City Limits is held. The first night will include performances by Coldplay, Imagine Dragons and London Grammar.

Coldplay said it was "thrilled" to be playing on opening night, adding: "It's a great honour for our band and we hope everyone has a fantastic time."

One artist who likely won't be appearing is Kanye West, who performed at the London festival in 2009. During a concert in New Jersey last weekend, he called out Apple CEO Tim Cook, singing via auto-tune: "Tim Cook, the head of Apple, stop trying to get performers to play your festivals for free, you are rich as (expletive)."

The iTunes festival in London typically attracts artists like West and Coldplay. Lady Gaga, Elton John, Justin Timberlake and Katy Perry were among the performers at the Roundhouse Theater last September.

The festival will be streamed live and on-demand through the iTunes store, iTunes radio and on Apple devices.

Cue, Apple's senior vice-president of Internet software and services, said iTunes had long considered having a U.S. counterpart to its U.K. festival, but had struggled to find the right fit. SXSW turned out to be a natural.

"It's got a great vibe for music, and it's centrally located, so timing-wise it works well to broadcast across the U.S.," he said.

While Cue didn't say whether the iTunes Festival at SXSW would become an annual event, he pointed to London as an example of how it could grow.

"We'll see where it leads us. I can tell you when we did the London one for the first time, we did it for a week in London and look what it's become."