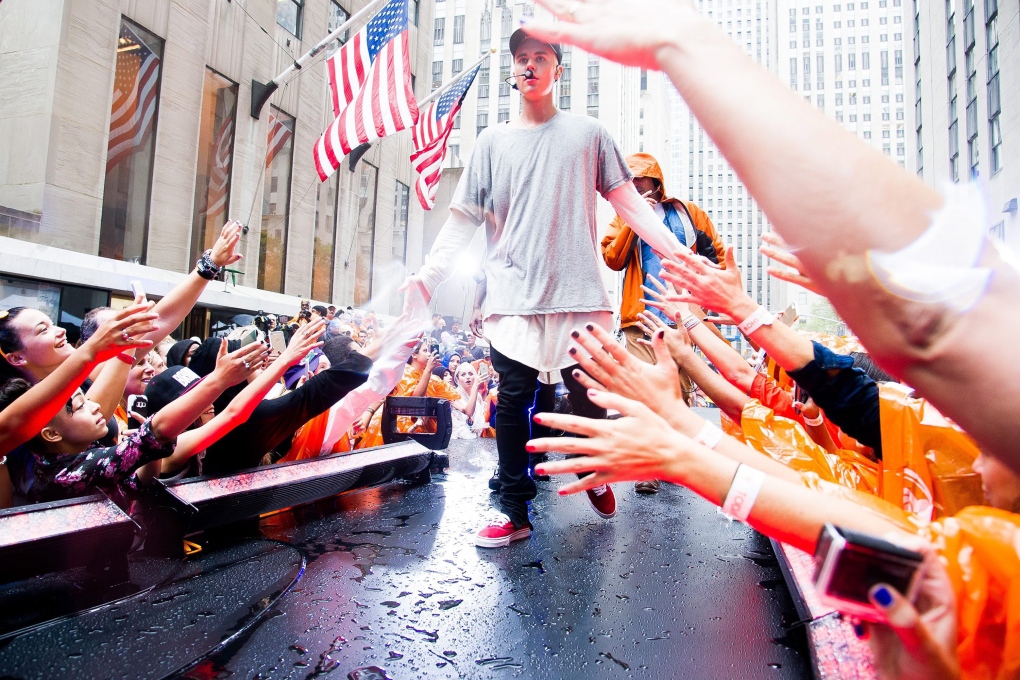 Justin Bieber performs in the rain on NBC's 'Today' show at Rockefeller Plaza on Thursday, Sept. 10, 2015, in New York. (Photo by Charles Sykes/Invision/AP)

TORONTO -- It seems Justin Bieber failed to make Beliebers out of the "Saturday Night Live" cast.

The teen pop star first fluttered his bangs on the late-night institution as a musical guest back in April 2010, when he was 16, then returned as guest host in February 2013.

Chameleonic cast member Bill Hader later said of the latter visit that he "really didn't enjoy having Justin Bieber around," while star Kate McKinnon similarly revealed that Bieber "wasn't pleased" with her famous impression of him.

Comedian John Mulaney was a writer on "SNL" during Bieber's first visit back in 2010 -- and the "Baby" crooner certainly left an impression.

"I was writing something and I had to go down and rehearse it late at night on a Friday," Mulaney recalled recently.

"I was walking down the hall carrying all these papers, and then, suddenly, someone jumped in front of me and did, like, karate in my face. And I dropped all my papers and (made a sound) like: 'Hnngh!'

"And then he got on an elevator 'cause he had to go do something -- which I always liked. His manager was like, 'Come on, we gotta go!' I like that he's in a rush and he took time to do that."

Still, the ever-polite Mulaney stresses that Bieber deserves some slack.

"I'm sure he'll do something really good for humanity one day," he said. "He'll balance the scales.

"We all wouldn't have been great at being 16 and adored around the globe."

Ahead of a performance during Toronto's JFL42 next week, Mulaney -- the 33-year-old former sitcom star who has a new special coming to Netflix this fall -- talked to The Canadian Press about Montreal, Martin Short and married life.

CP: You had a showcase at Just For Laughs in Montreal in 2008. Were you nervous?

Mulaney: I remember people warning me that the gala audiences were going to be old ladies -- because you do other shows at the festival at smaller (venues) that are fun and raucous. And everyone was saying it's going to be a tight, elderly crowd.

And it wasn't. It was a normal crowd.

Not that it's not fantastic to perform for a theatre of old Canadian women. But people were making it sound bad.

CP: Did you know Martin Short before working on "Mulaney"?

Mulaney: We met only at the first pilot I shot.

He was wonderful right off the bat. I was so deferential and intimidated. I was like: "Thank you so much for letting me into your house!"

He said, "We need to jump five years in our relationship so you can just talk to me about what you want."

CP: Which of his roles loom large for you?

Mulaney: Everything. My brother, sister and I were huge "Three Amigos!" fans. We were really big "SCTV" fans. I also loved "Innerspace." I loved "Clifford" so much.

When I was a little older, "Primetime Glick" came out and that is still one of the funniest things I've ever seen. I remember watching and thinking that I hadn't laughed this hard at anything since I was a kid.

CP: You got married last summer. Has that change been reflected in your writing?

Mulaney: Well, I care so much less every year of my life what people think of me. Being married helps that.

It's very helpful with comedy because you can go crazy trying to please everybody ... and I have sometimes.

Caring what people think of me was like a big, full-time occupation when I was 12 to 15. "I tripped on the stairs, did anyone see? If they saw, will they tell anyone else?"

But when you're really in love with someone and they're in your life every day, you care a lot less about other people.

So, what I'm saying is: I won't do a good show because I'm in love, and I just hope the people of Toronto understand that.