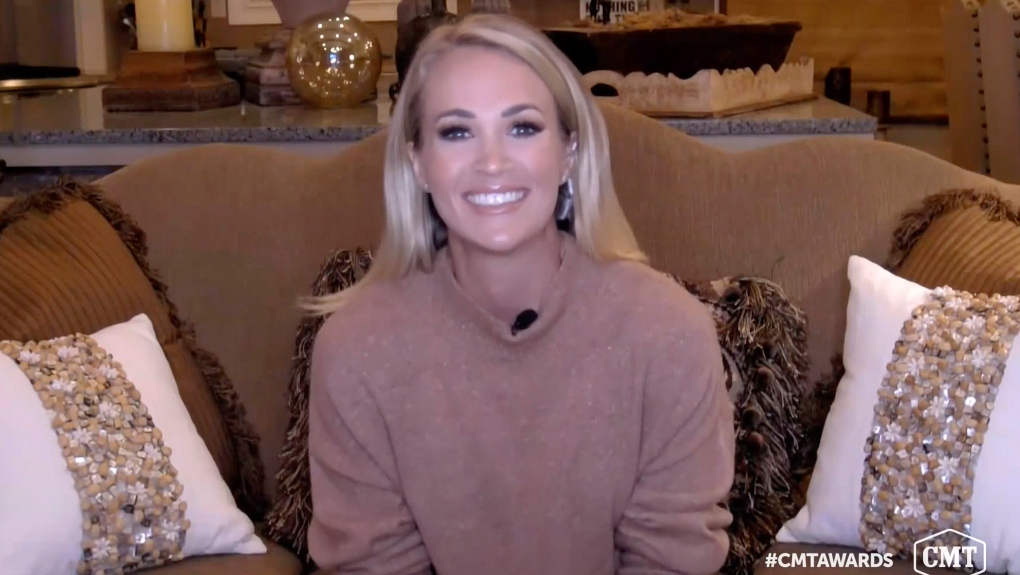 In this video image provided by CMT, Carrie Underwood accepts the video of the year award for "Drinking Alone"during the Country Music Television awards airing on Wednesday, Oct. 21, 2020. (CMT via AP)

NASHVILLE -- Carrie Underwood already had the most CMT Music Awards of any artist, but she'll need to make more room on her shelf. The superstar picked up two more trophies for video of the year and female video of the year in a remotely shot awards show.

Underwood appeared on video to accept for "Drinking Alone" and thanked fans for voting for her during an unpredictable year when touring ground to a halt because of the COVID-19 pandemic.

"This one is all about you guys especially because we again haven't been together but I feel so loved tonight," said Underwood.

Pop star Gwen Stefani won her first CMT Music Award for collaborative video of the year for her duet with Blake Shelton on "Nobody But You." The couple shared a hug and drinks together and expressed their love for one another in their recorded speech. "What is happening in my life?" Stefani exclaimed.

"This is a crazy pairing in lots of different ways, but it's working," Shelton said as they clinked glasses.

The country stars came out to celebrate even if audiences weren't there. Country's newest star Luke Combs shotgunned a beer with legends Brooks and Dunn to open the show.

Taylor Swift, who won breakthrough video of the year 13 years ago, presented the award to Gabby Barrett, for her song "I Hope," which has been a No. 1 hit across both country and pop charts this year.

Barrett, who pretended to hold an imaginary award in her hand, thanked the fans.

"That's something that I absolutely loved about country music, coming into it, was how loyal the fan bases are and how they just incredibly love the people that they love," said Barrett.

Not all the performances were shot in Nashville. Country superstar Shania Twain performed "Whose Bed Have Your Boots Been Under," a classic from her breakthrough 1995 album, from inside a Charlie Chaplin museum in Switzerland. Twain, in a leopard print top and sequined pants, danced and sang alongside mannequins dressed to look like the famous silent film comedian and actor.

Shay Mooney gave a shout out remotely to his toddler son, Asher. "He's watching right now. So you do need to go to bed for sure right now," he joked.

New this year was the CMT equal play award, which was presented to singer, actor and activist Jennifer Nettles, for her work advocating for women and diversity in country music.

"Thank you to all the fans and especially my artists, my sisters out there who continue to burn the holy fire," said Nettles. "I am so proud to be a part of this legacy of women in country music with you. And I am so proud of the stories that we tell. We have more to do as soon as we can."

The fan-voted awards show had a new category, quarantine video of the year, that highlighted country artists who got creative with music videos and songs during the pandemic. Singer Granger Smith won for his on-the-nose music video called "Don't Cough On Me!"