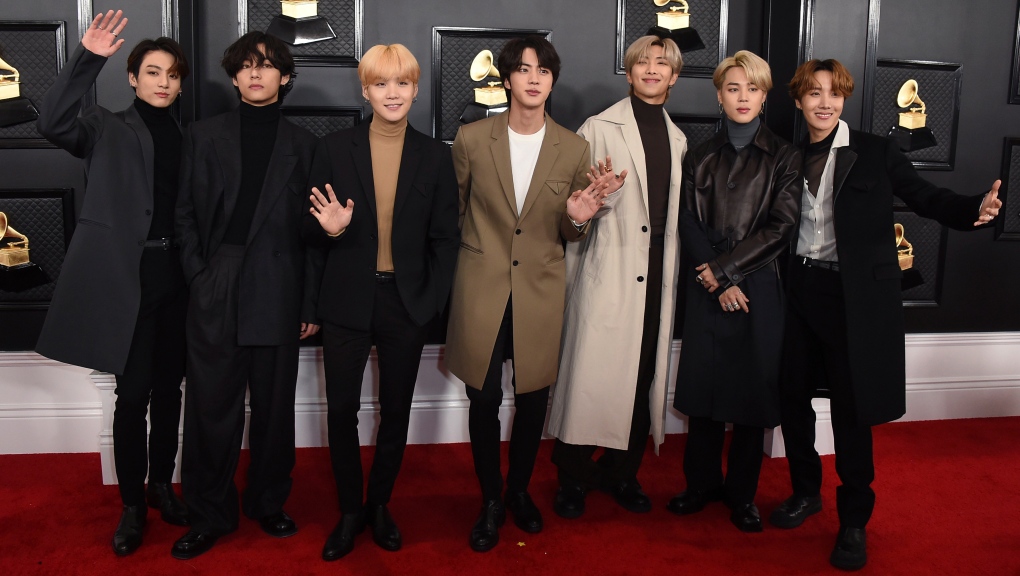 TORONTO -- A rise in anti-Asian racism during the COVID-19 pandemic, spurred in part by hateful rhetoric from former U.S. President Donald Trump and others – has resulted in a recent spate of vicious attacks on Asian people, from the U.S. to France.

Now, K-pop stars BTS have become the target of a racist rant by a German radio host.

Host of Bavarian station “Bayern 3,” Matthias Matuschik – apparently angered by BTS’ cover of “Fix You” by Coldplay during a recent MTV Unplugged performance – compared the Korean singers to the COVID-19 virus and said he hoped there “will be a vaccine for them” as well.

“These little p****** brag about the fact they covered “Fix You” from Coldplay, this is blasphemy” Matuschik said Thursday, according to local translated reports. “For this you will be vacationing in North Korea for the next 20 years.”

Matuschik also tried to explain that his comments were in fact, not racist because he “has a car from South Korea.”

“You can’t accuse me of xenophobia… I have the coolest car ever,” he said.

Matuschik's car is a Japanese Daihatsu Copen, seen on his Instagram page.

Fans of the group were quick to mobilize and demand an apology from the host and the radio station – with the hashtags #Bayern3Apologize and #Bayern3Racist trending on Twitter.

One fan remarked on Twitter that, “At a time of anti-Asianness, it’s not only deplorable but dangerous for someone like Matthias Matuschik to liken COVID-19 to a South Korean group like BTS. This only incites hate, violence to Asians from various backgrounds. This is disgusting @bayern3 the world is watching.”

Writer Jae-Ha Kim remarked that the German radio host “wasn’t edgy when he said he hates BTS & likened them to COVID. He knows there’s an epidemic of hatred towards Asians, fueled by public figures like him. I sincerely hope his slander doesn’t incite physical attacks.”

Bayern 3 released two statements addressing Matuschik’s rants, the first saying Matuschik was giving his “personal opinion” on BTS and their Coldplay cover, saying he “overshot his choice of words.”

“This is his personal opinion of taste, regardless of the band's origin and cultural background. You don't have to share this taste, just like the quite rough expression. The story of Matthias and his actions in the past (such as his involvement in refugee aid and his constant campaign against right-wing extremism) clearly show that he is absolutely remote from xenophobia and racism in any form,” the translated statement reads.

Fans weren’t buying it – and continued with their demands for an apology.

In the second statement, the station says they “apologize in all forms” for the remarks, and that the words the host used were unacceptable.

However, the second statement doubles down that Matuschik himself is “miles away from racist views” citing his past benevolent actions and behaviour with various marginalized groups.

Matuschik’s own comments are posted with the station’s second statement where he apologizes and says it was “never his intention” to insult the Asian community or BTS.

This is not the first time BTS has had to deal with racism in Western media coverage, something their fans have stepped up to call out time and time again.

BTS prides itself on being a paragon of inclusivity, tolerance and love – an ideology the fans are fiercely protective of. They continue to campaign for a change in the way BTS and other K-pop groups are portrayed in the media – “This goes way beyond K-pop, racism is not an opinion.”