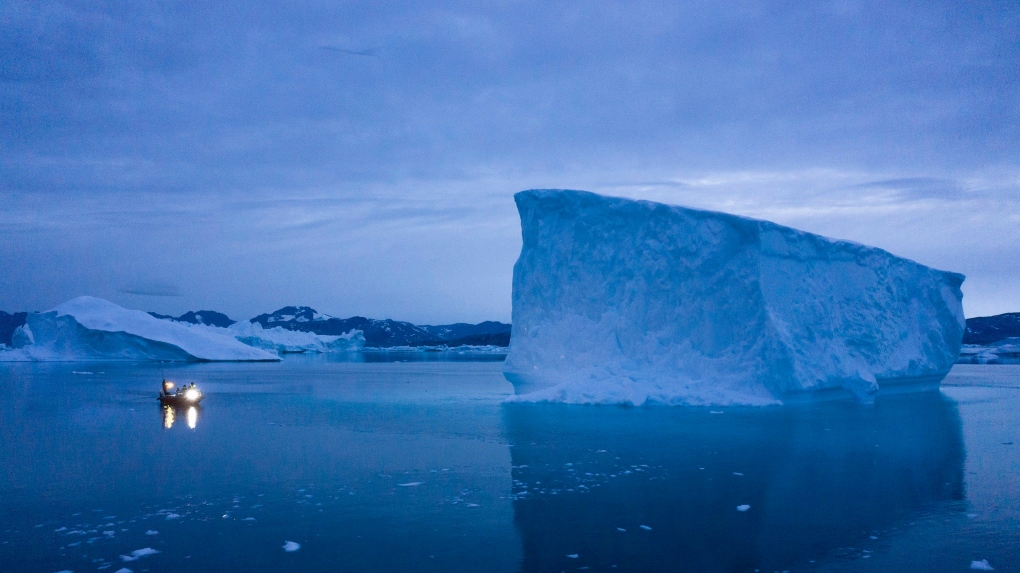 FILE - In this Aug. 15, 2019, file photo, a boat navigates at night next to large icebergs in eastern Greenland. (AP Photo/Felipe Dana, File)

IQALUIT, NUNAVUT -- Russia wants to stretch out imaginary lines on the ocean floor -- and below it -- and that has one northern security expert worried about consequences for other Arctic countries like Canada.

Last week, Russia filed a submission to the United Nations Commission on the Limits of the Continental Shelf to extend a claim to the Arctic Ocean seabed.

The UN still has to review the submission but, if it's approved, Russia would have exclusive rights to resources in the seabed and below it, but not in the water.

The new submission would push Russia's claim all the way up to Canada's exclusive economic zone, an area 200 nautical miles from the coastline, in which Canadians have sole rights to fish, drill and pursue other economic activities.

Philip Steinberg, a political geography professor at the University of Durham in the United Kingdom, estimates Russia's submission expands its original claim by about 705,000 square kilometres.

Robert Huebert, a political science professor at the University of Calgary, said Russia's request gets as close to Canada's 200-mile limit as possible.

"This is a maximalist submission. You cannot claim any more," said Huebert, an Arctic security and defence analyst with the Centre for Military and Strategic Studies.

Countries have sovereignty over their zones but can submit scientific evidence to the UN to claim control over the soil and subsoil of the extended continental shelf.

Russia's amended submission overlaps with those from Canada and Denmark, but does not extend into the north of Alaska.

"In effect, they're claiming the entire Arctic Ocean as their continental shelf in regards to where their Arctic comes up against Canada's and Denmark's." Huebert said.

The claims from Canada, Denmark (on behalf of Greenland), and Russia already overlap at the North Pole, but the amended claim goes beyond that, Huebert said.

"We haven't seen a country before that's extended over its neighbours. Here's a situation where they're claiming the entire Canadian and Danish continental shelf as part of their continental shelf."

Huebert noted there have been recent reports of an increased Russian military presence on the Ukrainian border over the last two weeks.

"If the Russians reinvigorate the conflict with Ukraine, that is going to spill into all of this." he said.

"I don't think anyone should assume that Russia will do anything less than pursue its maximum foreign policy interests."

Whitney Lackenbauer, a professor at Trent University who specializes in circumpolar affairs, disagrees.

"Russia is playing by the rules. And for those of us who are concerned about Russia's flouting of the rules-based order, I actually take a great deal of comfort in seeing Russia go through the established process in this particular case," Lackenbauer said.

He believes Russia's submission signals eventual talks between the three countries to determine the limits of their continental shelves.

"Setting out to negotiate where the outermost limits would be was something that was always in the cards," Lackenbauer said.

"I'm not worried about Russia's actions as an Arctic coastal state seeking to determine the outermost limits of its extended continental shelf."

Nor is he concerned about potential conflict, since Russia has submitted the required scientific evidence.

"You can't sit on a continental shelf and claim squatter's rights to it."

In a statement, a spokesperson for Global Affairs Canada said Canada "remains firmly committed to exercising in full its sovereign rights in the Arctic" according to international law.

It said Canada is studying Russia's revised claim on its outer limits to prepare an appropriate response.