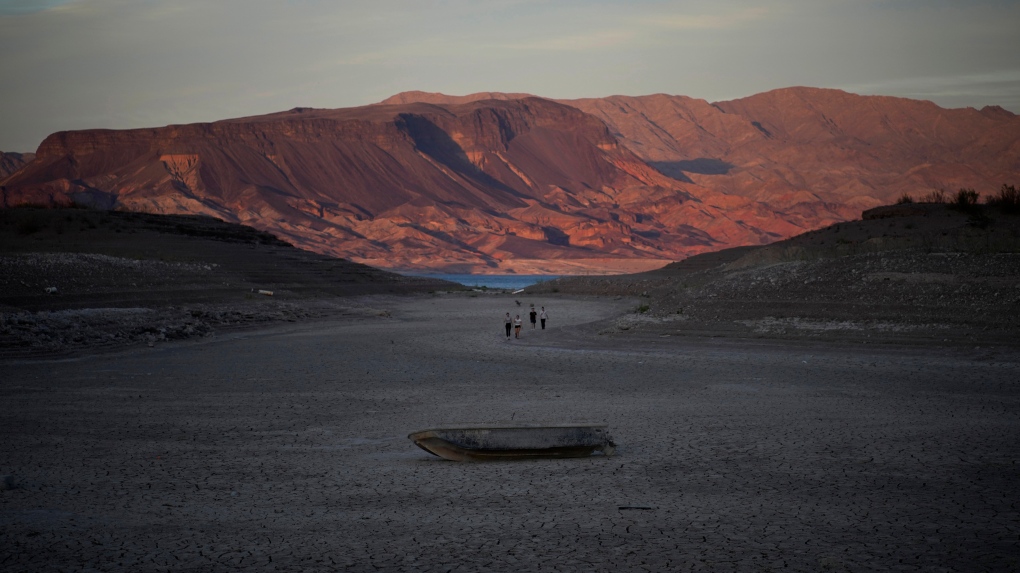 A formerly sunken boat sits on cracked earth hundreds of feet from what is now the shoreline on Lake Mead at the Lake Mead National Recreation Area, Monday, May 9, 2022, near Boulder City, Nev. (AP Photo/John Locher)

U.S. federal officials have a sobering forecast for the Colorado River Basin: Lake Mead, the nation's largest reservoir which serves millions of people in the Southwest, will likely drop another 12 feet by this fall.

It's far below what the outlooks were predicting as of last year.

The latest forecast from the US Bureau of Reclamation shows the reservoir plummeting from its current elevation of around 1049 feet above sea level to around 1037 feet by this September.

One year after that, in September 2023, it suggests Lake Mead will be 26 feet lower than its current level — just 19% of the lake's full capacity and a level that would trigger the most severe water cuts for the Southwest.

The region is already in an unprecedented Tier 1 shortage on the Colorado River, which led to mandatory water cuts that mainly impacted agriculture. The latest forecast would suggest that California, Arizona, Nevada and Mexico would see even more significant cuts to their Colorado River water starting in January, and — without a couple of blockbuster winters with lots of rain and snow — more severe cuts the following year that would stretch into household and industrial use. Federal officials make those determinations on a year-by-year basis in August.

In a sign of how bad the water crisis has gotten for the Southwest, Lake Mead is already running well below what last year's projections suggested, even in its worst-case scenario. In August, the bureau predicted the reservoir would most likely be at 1,059 feet at the end of this month, and 1,057 feet at worst.

Patti Aaron, a spokesperson for the Bureau of Reclamation, told CNN that this is because of several factors — and last winter's pitiful precipitation played a large role.

She also pointed to two other factors that are pushing Lake Mead well below its forecast. One is that federal officials made an unprecedented decision last month to delay water released from upstream at Lake Powell, to preserve the Glen Canyon Dam's hydropower-producing capabilities. That means less water is now flowing downstream into Lake Mead.

But she also pointed more generally to the Southwest's worsening drought, which has increased the amount of water agriculture is pulling from the Colorado River.

"The agricultural demands downstream have actually been higher this year because it was a warmer and drier spring than normal," Aaron said. "So their demands have been higher."

Drought conditions in the Southwest worsened significantly over the past week, the US Drought Monitor reported Thursday. Notably, "exceptional drought" — the worst designation — expanded in California from nearly zero coverage to 11% of the state.

The worst drought conditions were noted in the San Joaquin Valley and surrounding mountains in California, where the "snow cover is virtually non-existent below 8,000 feet," the monitor reported, which has caused the peak snow-melt water to occur "weeks ahead of normal." Wintertime snowpack stores precious water that later melts and drains into reservoirs in the spring. California snowpack provides 30% of the state's water, according to the Department of Water Resources.

As the drought has deepened, Lake Mead's water level dropped below 1,050 feet elevation for the first time last week — a sign more stringent water cuts are coming for the Southwest.

The bureau's next consequential report comes in August, at which point it will determine whether more cuts are needed. If the forecast indicates Lake Mead's water level will be below 1,050 feet come January 1, the Southwest will move into the second tier of unprecedented water cuts that will deepen the impacts for cities, industry and tribal water users.

Mounties on Vancouver Island have publicly identified the two gunmen killed during a shootout with police at a bank in Saanich on Tuesday as 22-year-old twin brothers Mathew and Isaac Auchterlonie.