Yellow vests in Canada bear no resemblance to protesters in France: ambassador 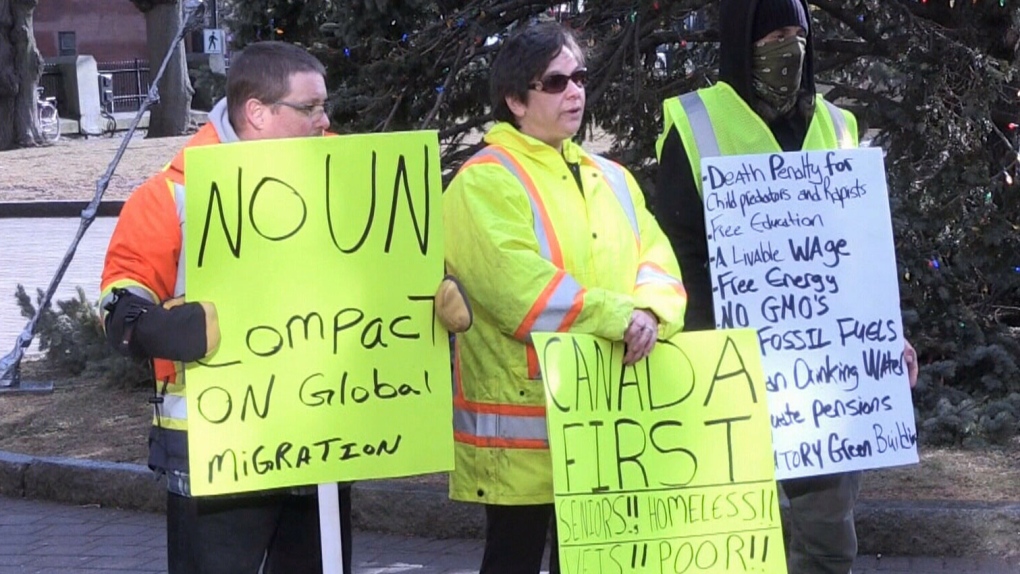 OTTAWA -- Canada's ambassador to France says this country's yellow-vest protest movement bears little resemblance to the "gilets jaunes" who started it all in France.

Isabelle Hudon says the movement in Canada appears to have been appropriated by far-right extremists espousing racist, anti-immigrant views and even indulging in death threats against Prime Minister Justin Trudeau.

By contrast, she says the yellow vests in France started last November with a protest against a fuel tax and mushroomed into a more generalized protest against the heavy tax burden imposed by French political and business elites on the middle class.

While violent individuals have been involved in the French protests, some of which have devolved into riots, Hudon says she's never seen the protests there linked to race or immigration.

Hudon, who was in Canada along with five other envoys to brief ministers at a cabinet retreat last week, says it appears to her that protesters here have adopted the symbol of their French counterparts -- the yellow safety vests all drivers in France are required to carry in their vehicles -- but do not share similar complaints or objectives.

During a stop in Moncton, N.B., over the weekend, she was surprised to see some yellow-vest protesters brandishing signs with what she called "violent words on immigration."

"It's not at all the kind of messages that the real gilets jaunes in France would deliver," Hudon said in an interview.

"It's not at all the same dynamic in Canada from what I heard and from what I saw," she added. "It's almost like here in Canada they're seeing a strong brand and they're branding their voice under the yellow vest but I'm not sure that it's totally the same, or at all the same. But it's almost like they're borrowing the brand, the gilets jaunes, and you know what? It's highly visible."

The Facebook page for Yellow Vests Canada, which boasts more than 100,000 members, says the group's mission is "to protest the CARBON TAX and the Treason of our country's politicians who have the audacity to sell out OUR country's sovereignty over to the Globalist UN and their Tyrannical policies."

"We are also against the government attempting to buy off the media in an election year and conspire with social media companies to censor our speech. We CANNOT have a free and democratic society unless WE HAVE FREE SPEECH and the ability to express it as far and wide as we wish.

"We are Canadian Patriots who refuse to allow this country to walk down the path of Tyranny. God Bless."

Protesters sporting yellow vests who've turned up at events across the country have displayed widely varying agendas, from supporting pipelines to denouncing a non-binding United Nations compact on global migration. Most are virulently opposed to Trudeau.

The group's Facebook page has been rife with messages advocating or hoping for the prime minister's death. A moderator for the page has said the group doesn't tolerate hate messages and is trying to eliminate them from the site.

Brett Mineer, a Kamloops, B.C., radio host who earlier this month posted a tweet critical of the racist elements and conspiracy theories peddled among the yellow-vest crowd, was bombarded with threats and abusive comments, including suggestions that his wife should be raped and he should be beaten.