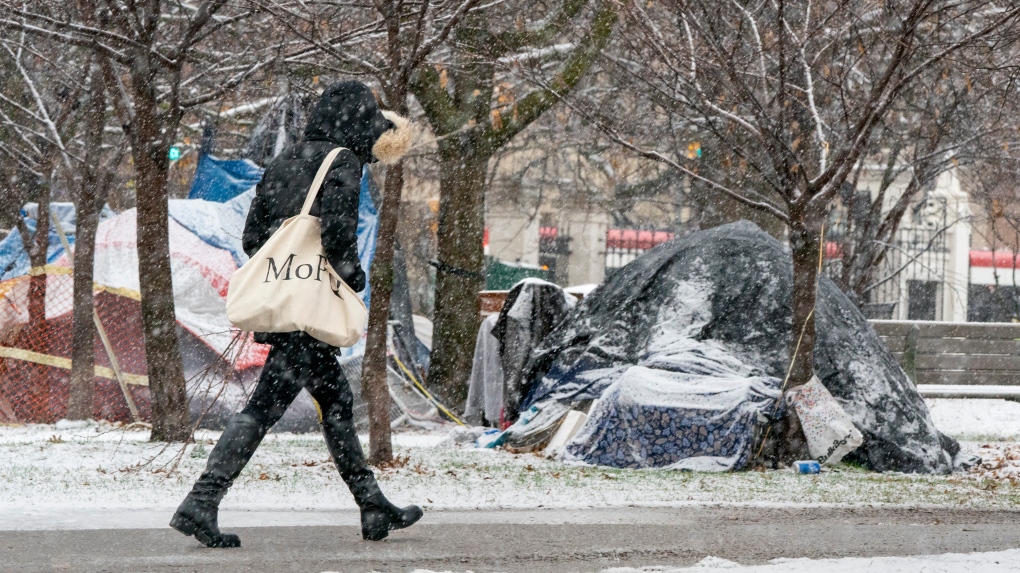 FILE - A pedestrian walks past a snow covered tent encampment in Trinity Bellwoods park in Toronto on Sunday November 22, 2020. THE CANADIAN PRESS/Frank Gunn

TORONTO -- As parts of Western Canada were hit with snow last week, cold weather is now expected to move into southern Ontario and parts of Quebec.

David Phillips, a senior climatologist at Environment Canada, told CTVNews.ca in a telephone interview on Tuesday that an April snowstorm is not uncommon in eastern Canada, but said the weather system is arriving much later in the month than usual.

"April's the cruel month. It's the month where we think that summer should be here, but we sometimes have to put up with winter weather," Phillips said. "I always say, you don't write the final chapter on winter weather until you really get it to May, because April can be cool and there can be some snow."

Phillips said cold, Artic air has settled over northern Ontario in recent days, and now a storm system from the U.S. is pushing into southern Ontario, which he says will result in snow.

"The cold Canadian air came in and filled all the nooks and crannies, and now you get a weather system that has lots of moisture because it's from the United States, and when it bumps into that cold air, you're going to get the white stuff at this time of the year," Phillips explained.

According to Phillips, the storm will mostly affect regions from Windsor to Ottawa starting Tuesday evening into Wednesday, and bring anywhere from five to 10 centimetres of snow. He said some flurries are expected and may impact road conditions.

The storm will send temperatures in the region below seasonal, with single-digit highs expected through the afternoon and near freezing temps overnight.

Phillips said the snow is expected to move into Quebec on Wednesday before the weather system travels to Atlantic Canada where it will turn into rain.

Environment Canada has since issued snowfall warnings from southern Ontario as well as special weather statements for Quebec.

While a warmer jacket and gloves may be needed for the next few days, Phillips said the snow isn’t expected to last for long.

"Tomorrow we're expecting a high of zero. It’s normally, for this time of the year in Toronto, it should be more like 13 or 14 degrees. So it's going to be really cool, but then by Friday, it'll be 15 degrees, 11 degrees on Saturday with some sunshine and then some rain," he said.

If this weather system had occurred in January, Phillips said Ontario and Quebec likely would have been in for a couple weeks of cold weather.

"But it's April so the sun is a little higher in the sky, the ground is also warm, so any snow that does fall will kind of melt fairly quickly," he said.

According to The Weather Network, forecasters are keeping an eye on another period of cold weather for Ontario and Quebec during the second half of next week as Typhoon Surigae recurves out of the tropics.

However, Phillips said this storm will likely be "winter's last hurrah."

"As they say, what nature giveth, it also taken away very quickly. This thing won't linger... it won't be around for long. The good news, every day from here on, we know there's less chance for the snow to come back," Phillips said.

"So what we'll see now is more spring like and seasonable."

Last week, a winter storm battered parts of Saskatchewan and moved through Winnipeg.

The storm, which Phillips said was part of a different weather system than the one expected to hit Ontario and Quebec, resulted in slick conditions for drivers that forced the temporary closure of Highway 1 in Saskatchewan.

Parts of southern Alberta were also hit with cold weather over the weekend after temperatures plunged from 20 C to zero on Saturday, resulting in 10-15 centimetres of snow in some regions including Calgary.