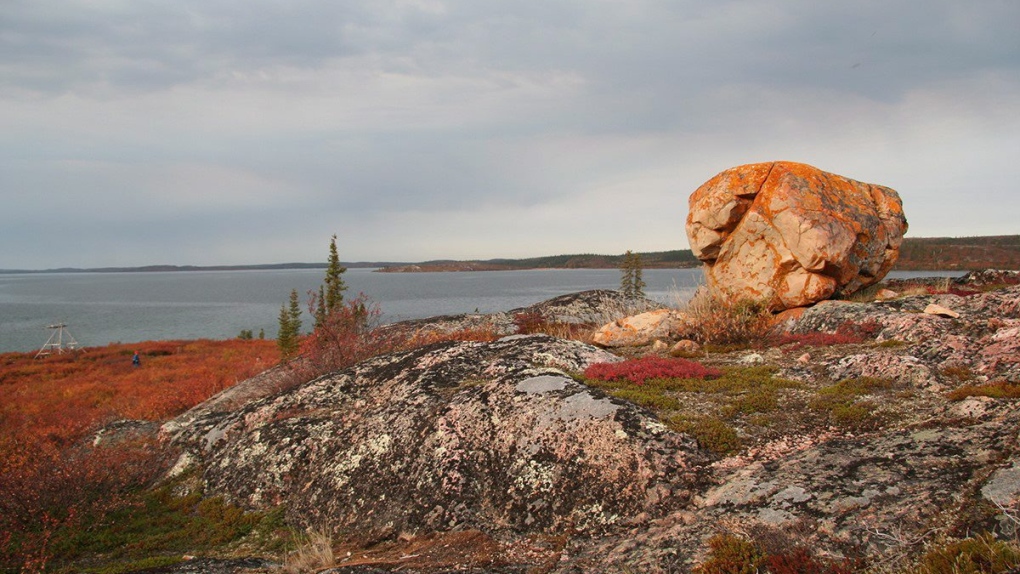 In this handout photo, a lichen-covered rock sits on an outcrop on the shore of Artillery Lake in an area within the boundaries of the proposed Thiadene Nene park in the Northwest Territories. (David Murray/Parks Canada-HO)

LUTSEL K'E, N.W.T. -- A deal on a vast new national park reserve in the North is being called a model for future relationships between First Nations and Canada.

"This is what our ancestors meant when they entered into treaty with Canada," said Steve Nitah, who represented Indigenous groups in talks that led to the Thaidene Nene National Park Reserve in the Northwest Territories.

"We agreed to share the land, its resources, the responsibility for management, and to benefit together."

Thaidene Nene -- Land of the Ancestors -- protects 26,376 square kilometres of pristine waters and healthy forest in and around the east arm of Great Slave Lake. The agreement to be signed Wednesday between the federal and territorial governments and four First Nations gives Indigenous people an unprecedented role in the park's operation.

It is to be co-managed by Parks Canada and the Lutsel K'e First Nation. Neighbouring communities will have a role in developing the park plan.

There will be at least eight full-time jobs to monitor and protect the land and run a visitor and operations centre in Lutsel K'e. Indigenous people will be able to hunt, fish and carry out other traditional activities as they always have.

It's the way of the future, said federal Environment Minister Catherine McKenna -- especially if Canada is to meet its internationally promised target of 17 per cent of its land under protection by 2020.

"It was clear that the only way you could do that was in partnership with Indigenous people," she said. "This follows along that vision."

No industrial activities will be allowed. Non-Indigenous visitors will be barred from big-game hunting, but can otherwise use the area.

Campgrounds and other infrastructure are to be developed. The park will be marketed as a tourist destination, said Nitah.

Visitors will experience both boreal forest and tundra threaded with lakes, rivers and waterfalls. The lake boasts spectacular cliffs and islands and some of the deepest freshwater in North America.

Wildlife in the area includes moose, muskox, wolves, bears, wolverines, caribou and many species of birds and fish.

"It's the heart of our homeland," Nitah said. "We want to be able to ensure that future generations can depend on it for sustenance, cultural preservation and spiritual guidance."

Nitah said southern First Nations are already looking at the Thaidene Nene agreement as a model for talks with Parks Canada.

The deal took more than 50 years to work out. Overlapping land claims and concerns about mineral resources made the talks complicated, McKenna said.

About 8,000 square kilometres originally proposed for the park were removed because of potentially valuable deposits.

Thaidene Nene brings Canada's inventory of protected areas to just over 12 per cent, an increase of two percentage points under the Liberal government.

More is coming. A $1-billion federal-private conservation fund has been overwhelmed with applications, McKenna said.

"Many of those are with Indigenous people. They don't necessarily have to be national parks.

"We are committed to meeting our 17 per cent target."

Nitah's just glad Thaidene Nene is finally on the books.

"That's where I grew up, on the land in bush camps. Summers on the tundra, fall in the boreal, following the trapping seasons.

"It's close to my heart, and close to all the people from Lutsel K'e."