Dozens of community members in Cold Lake, Alta. came together on Friday afternoon to clean up a local mosque after it was vandalized.

The vandalism at the mosque, which included smashed windows and racist messages, was discovered Friday morning. The words "Go home" were written multiple times across the outside of the building in red spray paint.

Volunteers on Friday afternoon cleaned up the façade and removed the racist scrawlings. A poster with the phrase “Love your neighbour” was also seen in a window.

Mosque board member Mahmoud Elkadri said he spotted the vandalism when he arrived to open the doors for prayers. Elkadri has lived in Cold Lake since 1996.

“My kids saw it and they started crying and I said: ‘Why are you crying?’ They said: ‘We were born here and raised here and this is our home,’” Elkadri told The Canadian Press.

Elkadri doesn’t believe the vandalism is linked to any anti-Muslim sentiment.

“I am very sure whoever did this could be just a drunk random person at nighttime or it could be … someone not from Cold Lake,” he said.

The vandalism comes just two days after a Canadian soldier was shot and killed by a radicalized Canadian at the National War Memorial in Ottawa. It's also four days after another attack on Canadian soldiers in Quebec, which left one soldier dead and another wounded.

Both individuals responsible for the attacks were Canadian-born men who had recently converted to Islam. Ottawa shooter Michael Zehaf-Bibeau, 32, and Quebec attacker Martin Couture-Rouleau, 25, were both shot dead.

Investigators say the two men had each been radicalized by Islamic State ideology.

Muslim leaders in Canada have repeatedly condemned the radical Islamic State militant group, which has seized territory in Iraq and Syria and recruited hundreds of Westerners to its cause.

Prominent Muslim cleric Imam Syed Soharwardy of Calgary on Thursday urged mosque leaders across the country to be wary of converts who show signs of radicalization.

"They should take on the responsibility of checking backgrounds and staying in touch and make sure this person is not being recruited by any radical organization or terrorist organizations," Soharwardy said on Thursday.

"I'm not saying don't convert them, but we have to be aware of those activities and work with police intelligence to make sure that a criminal person who just converted to Islam does not commit a major crime."

The town of Cold Lake is home to the military base where Canadian CF-18 fighters departed from earlier this month to participate in airstrikes against the Islamic State in Iraq.

Ihsaan Gardee, executive director of the National Council of Canadian Muslims, said the incident doesn’t represent the sentiment of the “vast majority” of Canadians.

“It’s kind of ironic that the word Canada was printed (on the mosque) because I think the vast majority of our fellow citizens would say this is un-Canadian,” Gardee told CTV’s News Channel Friday.

Ajaz Quraishi, president of the Cold Lake Islamic Society, told CTV Edmonton he is hopeful that the vandalism was an isolated incident.

“I know just about everybody in the city of Cold Lake, and people are good,” said Quraishi, who’s lived in the city for the past 30 years. “I don’t know who did it, very hard to say, but I’m very surprised to … see this happen in Cold Lake.” 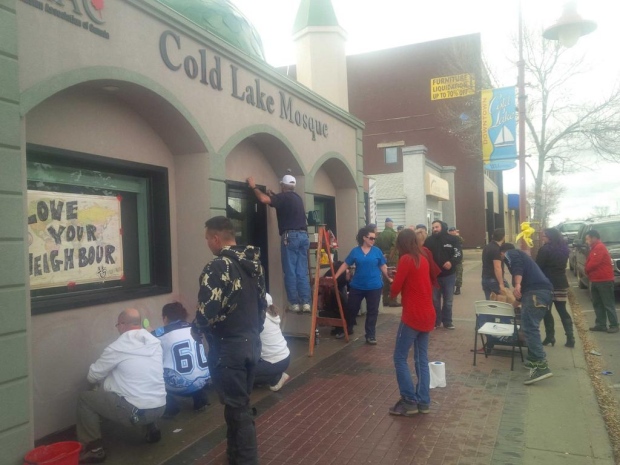 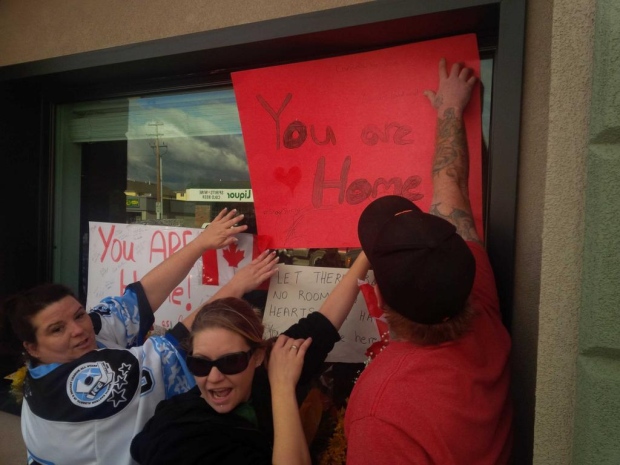 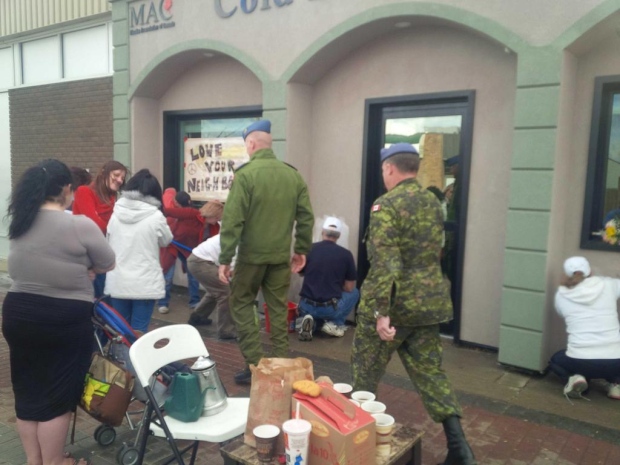