The student union president of Halifax’s Saint Mary’s University says he made the "biggest mistake" of his life after a notorious chant promoting non-consensual sex with underage girls was used to rally first-year students during frosh week.

The chant, which was captured on video during orientation week activities and later posted on Instagram, has sparked outrage both across the country and on the east-coast university campus.

He was joined by the 80 student leaders who led the chant, which included the phrases: "Y is for your sister," "U is for underage," and "N is for no consent." It was performed on Monday in front of approximately 300 first-year students.

According to Perry, the controversial chant has been a part of the school’s frosh week tradition.

"(The chant) was passed down from year to year through the orientation leaders as one of the six chants that we have," Perry said.

He said while some students at SMU are “highly ashamed” of the chant, not all students on the campus believe it was wrong.

"Some are confused, some have said they don’t think the chant is wrong or that they didn’t think twice about saying it," he said.

According to Atonio Espinosa, a student at SMU, the frosh leaders and the first-year students were simply caught up in the excitement of orientation week.

"Everyone is excited to come and meet people. Sometimes words come and go," he said.

Some students at SMU outraged

Some students, however, believe that the chant is a reflection of a rape culture that still exists among young adults in school.

"I think this is an example of the rape culture that exists on all campuses and in our lives and it’s something that needs to be taken serious," Elise Graham, a university student said.

Many students at the school were also shocked and disgusted to learn of the frosh-week chant, saying the lyrics are not a “fair representation” of the student body’s attitude towards consent and sex.

"I was absolutely appalled and disgusted, not simply as a woman but as somebody who works hard on campus to dispel those attitudes surrounding consent and sex," Lewis Rendell, the secretary of the board of directors at SMU’s women’s centre, told CTV News Channel on Thursday.

She said the atmosphere on the university campus on Thursday was very "tense."

Some students, including Dakota Rideot, were in disbelief over the chant, wondering if the frosh leaders and the first-year students partaking in the orientation activities were actually listening to the words coming out of their mouths.

"In chanting those words, you’re actually asking guys to come rape you," she told CTV Atlantic. "So I wonder are people actually listening to the words when they’re saying it," she asked.

Rendell, who said she transferred to Saint Mary’s in her second year and was not aware of the chant prior to the video going viral, added that there’s also been a lot of anger directed at the school, specifically from the online community.

"There’s been a lot of anger online," Rendell said. “Some of it unfairly directed towards individuals at the university but the online community, specifically on Twitter, has been enraged.”

On Thursday, Nova Scotia’s Premier Darrell Dexter added his voice to the growing chorus of people who have expressed outrage over the chant, saying he was disturbed by it.

"You know, kids, they often act without considering, necessarily, the consequences of the things that they’re saying. It was very disturbing," the premier said.

Dexter said that he believes that had the students thought about what they were saying, they would have acted differently.

"I also felt bad for them as well, because I think if they had sat for a second and thought about it, they wouldn't have engaged in that kind of behaviour, particularly in this province, it's is a very, very sensitive thing."

Asked about why the students performed the chant, Rendell said she believes a mob mentally could be blamed.

"I think that a sort of rally mentally did take over."

Rendell added however that doesn’t mean the students were without fault. "It’s difficult to think that a group of adults didn’t understand the words that they were saying. I don’t think it was simply an oversight."

She said it was frustrating that given the amount of work her and her peers at the women's centre put in on the campus to counteract these types of attitudes, they are still "being met with adversity at every turn."

On Thursday, SMU’s president Colin Dodds said he was shocked by the video and issued an apology on behalf of the university.

"As a parent and a grandparent of a young baby daughter, yes, I am… sickened. I think you can see that. It’s not my usual dismay. But we have to move forward."

He said the school has called a special meeting with the executive and board of the student association asking them to explain what happened.

According to Irene Smith, the executive director of the Avalon Sexual Assault Centre, the college and university demographic is the most difficult to reach about sex and consent.

"The demographic has so internalized the rape culture that they’re not seeing it," she said. "It’s disappointing that the effort that government has put in recently to the poster campaigns talking about consent that it didn’t hit that university demographic, at least those students."

Perry said that given that this type of attitude still exists on campus, he and the school believe "there’s a problem of a culture of sexism that demands attention and real action on the campus."

He said the school’s student association will be working hard in the coming years to dispel those attitudes and to cultivate a campus community where "everyone can feel safe."

Perry said an investigation has been launched by the student body to ensure that the chant or any similar types of behaviour will not be repeated.

"There are many things that our association can do to show leadership in addressing issues such as consent and sexual assault. SMUSA will therefore take the next couple of weeks to create a plan on how to open up a larger campus-wide dialogue about sexism."

Perry on Thursday stepped down as the chair of Students Nova Scotia, a province wide students group. He will continue as head of the university’s student association.

Eighty student leaders involved in the school's orientation week have been required to take a sensitivity seminar before the end of the month.

The university is still deciding if disciplinary actions will be taken against the students.

With files from CTV Atlantic and The Canadian Press 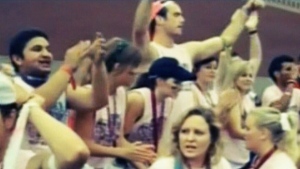