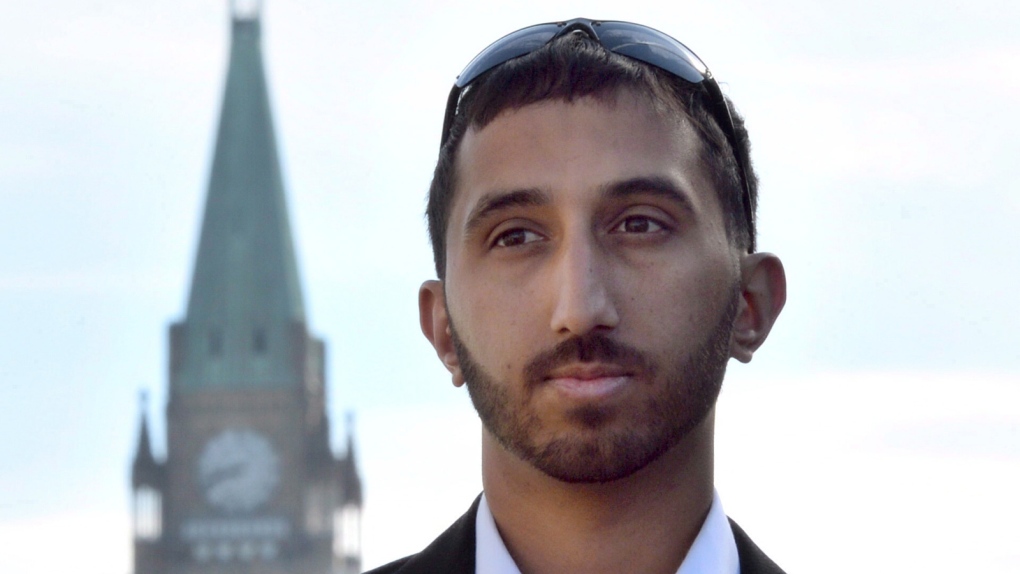 Deepan Budlakoti is pictured outside the Supreme Court building in Ottawa on June 16, 2014. (Sean Kilpatrick / THE CANADIAN PRESS)

MONTREAL -- A man who has been convicted of trafficking drugs and weapons and who has no citizenship from any country is expected to learn on Thursday whether he can have his release conditions relaxed.

Deepan Budlakoti, 25, asked a member of the Immigration and Refugee Board on Monday to ease the restrictions of his release because he says they are psychologically harmful and violate his constitutional rights.

Budlakoti says he is not an official citizen of any country and is considered a "non-status" person living in Canada.

Court documents state he was born in Ottawa in 1989 to Indian parents who worked for Indian High Commission officials. He was not granted automatic citizenship.

The federal government in 2011 declared Budlakoti inadmissible to remain in Canada after he was sentenced to more than three years in prison after being convicted of breaking and entering, weapons and drug trafficking, as well as the illegal possession of a firearm.

Ottawa tried to have him deported but in 2013 Indian officials refused to give him a travel permit because they did not recognize him as an Indian citizen, according to court documents.

He was released from detention by the Canada Border Services Agency in 2013 and remains free in Ottawa under certain conditions.

Budlakoti asked an immigration officer Monday to remove several of his release conditions including that he report to a CBSA officer every three months and "be of good behaviour and keep the peace."

Robert Gervais, a spokesman with the Immigration and Refugee Board of Canada, said Budlakoti argued that his conditions make it difficult to participate in protests.

"(Budlakoti) said today (Monday) that he has participated in 14 or so demonstrations -- supporting his cause and case and immigration issues -- but always with the presence of his lawyer," Gervais said.

Budlakoti argues the condition to "be of good behaviour and keep the peace" violates his rights because it prevents him from fully being able to assemble in public.

In 2011, the Immigration and Refugee Board of Canada rejected Budlakoti's request to be declared a Canadian citizen.

The appeals court ruled that Budlakoti is not legally a "stateless person," as he claims, because he has not officially applied for citizenship in either Canada or India.

In an interview, Budlakoti said he "has no reason" to formally apply for Canadian citizenship because he is already Canadian.

He said the passport he was issued proves the government recognizes his citizenship.

The Federal Court ruled that the passport was issued in error.

Budlakoti says there is an active deportation order against him but since there is no country to send him to, he can't go anywhere.

"Canada can't execute the deportation order," he said, adding he is currently appealing to the Supreme Court of Canada.

"They can't force me to leave the country," he said.

An immigration board member is expected to decide Thursday whether to relax Budlakoti's restrictions.

The Canada Border Services Agency opposes any easing of his release conditions.