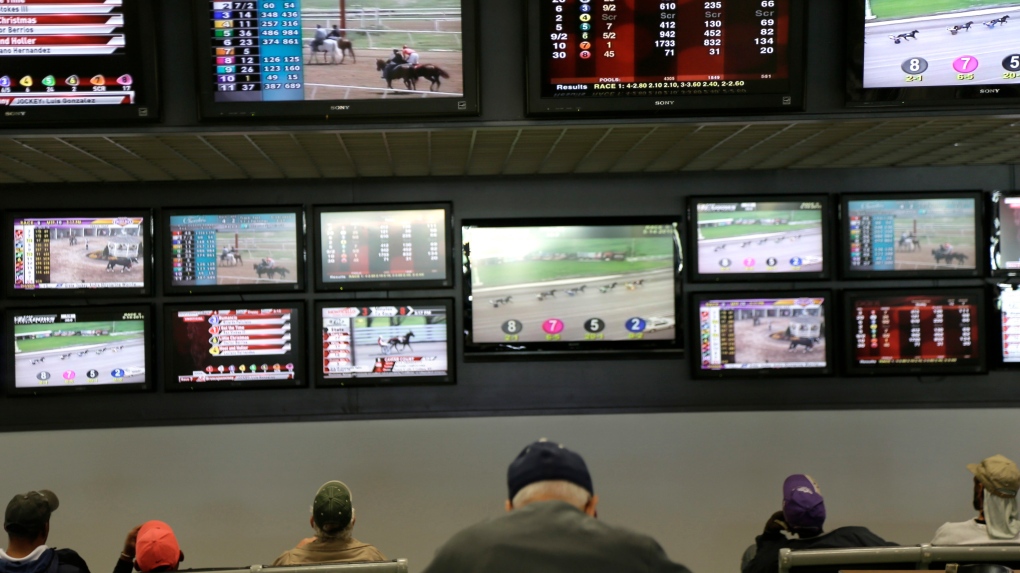 In this May 14, 2018, file photo, men watch horse racing on an array of screens at Monmouth Park Racetrack in Oceanport, N.J. (AP Photo/Seth Wenig, File)

TORONTO -- Sports bettors are at a greater risk of problem gambling compared to other types of gamblers, a new study from the University of Guelph says.

The study, conducted by psychology professor Harvey Marmurek, as well as master’s students Alysha Cooper and Katrina Olfert, surveyed 1,280 self-identified gamblers in Ontario, 596 of whom had made sports bets in the last year, and asked them to score themselves on known indicators of problem gambling.

Indicators of problem gambling include betting outside of one's means, gambling large amounts of money for the same level of excitement, and gambling that has caused financial, health or relationship problems.

“We asked a lot of questions about their motivations, their cognition, their impulsivity and they tended to rate higher on just about everything,” Marmurek says. “They are higher on intellectual challenge as a motivation, for example. They are also higher overall on impulsivity.”

The study found that sports gamblers, who are most likely to be young men, are not only at a higher risk of becoming problem gamblers, but are more involved in gambling, have more positive views towards gambling and are more likely to believe in their own self-control and chances of winning.

The researchers concluded that the problem was not sports betting itself, rather the behaviour and personality type of people drawn to sports betting.

“They are more likely to say that they stick to it because they think they are going to win...” Marmurek says. “All gamblers think that there is likely more harm than benefit. But sports gamblers have a more positive attitude overall so their rating of ‘do the harms outweigh the benefits,”...is lower than for non-sports gamblers.”

“For non-sports gamblers, the main conditions under which they tend to lose control is when they are in a bad mood,” Marmurek says.

Bad losses can be potential triggers for increased betting and more risky behaviour, according to Marmurek.

In Canada, little research has been done on the characteristics of sports gamblers. However, research on sports gamblers in Australia and the U.S.have similarly shown that young men were the most likely group to engage in sports betting and that sports bettors showed higher levels of impulsivity.

This study comes amidst the federal government's introduction of Bill C-218, which could end Canada's prohibition on single game sports betting.

Under current Canadian law, sports bets can only be done in parlay, meaning that gamblers must bet on the outcome of three sporting events and cannot make single game bets.

If the Senate votes to pass Bill C-218, Canada will allow for U.S.-style single-event sports betting, a shift that could result in a betting market predicted to be worth nearly US$6 billion.

Though this study is not connected to these proposed legal changes, Marmurek says that if Bill C-218 is passed, more work will need to be done to educate people on the risk of sports gambling.