Overflowing rivers continue to wash-out roads and bridges and flood homes throughout southern Alberta, leaving at least three dead, and forecasters are warning of more rain throughout the weekend.

Police confirmed Friday that two bodies were pulled out of the waters in High River, where a mandatory evacuation order remains in effect. Another body was later found, but it's unclear if that was a woman who was reportedly swept away in her camper into the Highwood River.

“In their efforts to determine if any other citizens are missing due to the flooding, the RCMP is asking residents evacuated from the Town of High River area to register at the evacuation shelters in the nearby towns of Blackie and Nanton,” police said in a statement Friday afternoon.

Officials said approximately 500 evacuees have already registered in the shelters.

West of Calgary in Canmore, the situation remained dire, with entire homes at risk of washing away as the swollen Cougar Creek began eroding its banks and creeping up on houses along the waterway.

Gerald Walsh was among those forced to evacuate as the rising river began to threaten his home.

“Given a limited amount of time, we had to evacuate. You really don’t get to grab much, pictures, some memorabilia, a little bit of clothes. It’s amazing how little the material things mean to you, so we just grabbed maybe two buckets of stuff,” Walsh said.

Evacuated residents in Canmore were effectively trapped in the community, unable to head east due to a mudslide blocking the TransCanada Highway, or west to Banff due to washed out bridges that made the town inaccessible.

Canmore resident John Pomeroy told CTV News Channel he has already taken 11 people into his home since the flooding began.

He said electricity and natural gas has been “on and off” in the area.

“They did manage to get a convoy of grocery trucks into the grocery stores,” he said. “It takes a long time in the lines to get any food.”

The military was called in by the RCMP to help with evacuations in some hard-hit communities, including High River, sending two helicopters and a Hercules aircraft to pull at least 31 stranded residents from rooftops.

Rescue crews could be seen travelling by airboat on a flooded residential street, maneuvering past submerged cars in search of those who needed help getting out.

It will be days before people will be able to return home, but the 12,000 High River residents who were forced to leave under a mandatory evacuation order are uncertain of what they’ll return to once the rain stops and waters recede.

Dave Linthorne’s home was damaged by sewage backup and his hardware business was also hit by flooding.

“The last I saw it before they made us leave, the walls were covered, seven, six feet up,” he said.

Linthorne’s inventory was also swept away down the road.

Another High River resident, Jason Johnson, said everyone is devastated. But, he said, others have it even worse.

“It’s really more the small things that are more heartbreaking, like the fact that we just planted an apple tree,” he said.

Approximately 350 soldiers are being deployed to Canmore, while 400 are expected to arrive in High River by Friday evening.

Located south of Calgary, High River was one of the hardest hit communities in the province, along with Turner Valley and Black Diamond.

In Black Diamond, two people were swept away by the Highwood River. One was found but a woman is still missing.

Environment Canada has issued a rainfall warning for parts of southern Alberta.

About 250 millimetres of rain has fallen into the flood zone, the Bow River basin, and another 50 mm was expected Friday and 20 mm more on Saturday.

With files from CTV’s Janet Dirks, CTV Calgary and The Canadian Press 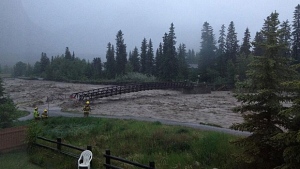 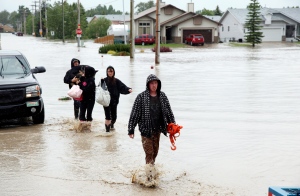