Lt.-Col. Dan Bobbitt, who died in a military training accident in Alberta on Wednesday morning, will be remembered by his regiment as an outstanding commander and a dedicated family man.

“He played hard and he worked hard,” Maj. Jennifer Causey, Bobbitt’s second-in-command, said in a news conference on Thursday. “Lt.-Col. Bobbitt was a leader we all aspire to be.”

Brig.-Gen. Omer Lavoie said Bobbitt, a married father of three children, would want to be remembered as a family man.

Bobbitt died Wednesday morning at CFB Wainwright in Alberta when the LAV III light armoured vehicle he was in rolled over. Four other soldiers were injured in the accident.

“It was a terrible loss for the regiment and for his family,” Causey said.

Bobbitt’s regiment was shocked to learn of his death and gathered to mourn him during a pause in military exercises on Wednesday night, Causey said.

“The loss of their leader was palpable. It could be felt. It was devastating, and rightfully so,” she said.

“The army is a small family,” Lavoie said. Such sad events serve to strengthen soldiers’ resolve, he said.

Bobbitt’s son was recently accepted by the Royal Military College of Canada – something that greatly excited his father, Lavoie said.

Military officials could not go into specifics regarding Bobbitt’s death, particularly in terms of where he was in the LAV when it rolled over. They would not comment on whether Bobbitt was in an exposed position in the commander’s turret at the time of the rollover.

But Defence Minister Rob Nicholson said an investigation of the accident will be released under his watch.

Nicholson also offered his condolences, saying Bobbitt’s death is “yet another reminder of the dedication and selflessness of our men and women in uniform and the risks of serving and defending our country in the armed forces.”

Lavoie described the CFB Wainwright training course as “undulating and hilly,” but said there will be no extra precautions taken as troops resume their training exercises on Thursday.

“The safety part, in training and in operations, that’s just a function of leadership, and it’s continually pushed down by leadership at all levels,” he said.

One of the injured soldiers remains in hospital in fair condition and is expected to be released later Thursday, while another was released from hospital Wednesday night. The two other injured soldiers were treated by Canadian Armed Forces medical personnel in Garrison Wainwright and released.

“On behalf of all Canadians, Laureen and I offer our deepest condolences to the families and friends of those affected by this tragedy, including all base personnel,” Harper said in a statement issued Thursday morning.

“We also offer our prayers for a speedy recovery to those who were injured.”

The prime minister added that the accident is a painful reminder that Canadian Armed Forces members put their lives on the line every day, both in theatre or training in Canada.

“His service to our country will be honoured and remembered,” Harper said.

“It is tragic to lose such a respected soldier as Lieutenant-Colonel Bobbitt,” he said in a statement.

“We wish to send our deepest condolences to the family, friends and colleagues of Lieutenant-Colonel Bobbitt, as well as our best wishes for a quick recovery to those who were injured in this accident.”

Bobbitt was the Commanding Officer of the 2nd Regiment, Royal Canadian Horse Artillery (2 RCHA), based in Garrison Petawawa, Ont. The injured soldiers were also members of 2 RCHA.

They were among some 5,000 military personnel participating in the Maple Resolve 2014 exercise at CFB Wainwright, one of the busiest army bases in Canada

Bobbitt served in a number of military roles over 25 years of service and completed multiple deployments to war zones. He served one mission in Afghanistan in 2007 and two tours of Bosnia. 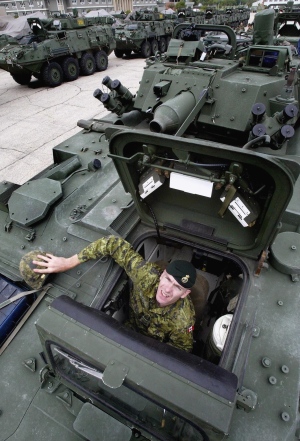 An effective vehicle, but with a history of rollovers