Show must go on: Calgary Stampede scrambled to open after 2013 floods 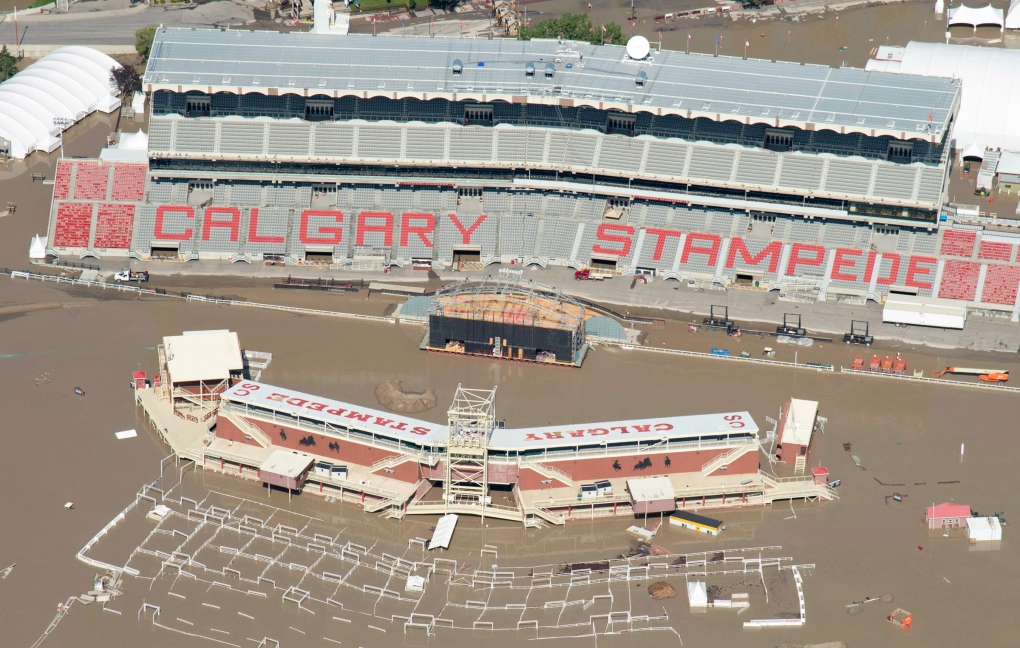 CALGARY -- The fact that organizers managed to pull off the 2013 instalment of the Calgary Stampede is cited as one of the massive achievements of Alberta's recovery from last year's flooding.

But Warren Connell, vice president of park development with Stampede, said many don't realize just how close they came to not being able to throw open the gates.

"If the flood had been two days later, we wouldn't have been open in time," Connell said in an interview with The Canadian Press ahead of the 2014 Stampede, which kicks off this week. "We probably had as much luck going with us as you could possibly hope."

The Stampede grounds was one of the areas hardest hit when floodwater swamped downtown Calgary at the end of June 2013, only two weeks from the July 5 parade to mark the opening of the city's marquee summer event.

The water was about three metres deep in the rodeo infield and could be seen lapping at the tops of the barns. Contaminated sludge left by the flooding was up to a metre deep in some areas. The Saddledome, home of the NHL's Calgary Flames, was flooded up to the eighth row of seats.

Connell said Stampede officials were on the phone the night the water peaked, attempting to get companies to fly into Calgary with their equipment and personnel.

But with so much devastation throughout Alberta, he said it was "critical" not to take away resources from other places that needed help.

"We had crews come down that were actually constructing the new (Calgary airport) runway," he recalled. "The province of Alberta had eight different highway projects shut down and all of those contractors and equipment came down to help us."

A temporary dike was manned around the clock to keep the water from destroying the power substation that provides electricity to the main buildings at the site. Two large generators were brought in -- one from Europe and the other from Fort McMurray -- to provide electricity.

Crews pumped millions of litres of water from the rodeo grounds, scraped mud, tore out and replaced drywall and sanitized surfaces as the days ticked down to the opening parade.

"Probably 4,000 yards of sludge that had come off the river was in Stampede park and had to be trucked out," Connell recalled.

Food preparation areas were contaminated so industrial kitchens in trailers were brought in.

The damage to the Saddledome was too severe and the headlining concerts needed to be cancelled.

There was fear was that the rodeo infield and racetrack would not be ready in time, but it was.

"We removed hundreds of dump trucks full of sludge," Connell said. "We had 10,000 yards of material taken out and brought back in just to re-do the racetrack."

The total bill for the damage was more $50 million. Many of the buildings on the ground were still running on temporary power until March of this year.

Connell gives credit to a core group of staff that remained on site during the crisis.

He estimates the Stampede opened at about 70 per cent of its normal capacity.

To stay closed was unthinkable.

"I think it became a beacon of hope and so it would have been very deflating I think if we had failed," Connell said.

"I don't think any of us have taken a look at what it would have meant economically. It was more about city pride, volunteer pride and the iconic event for the city of Calgary."