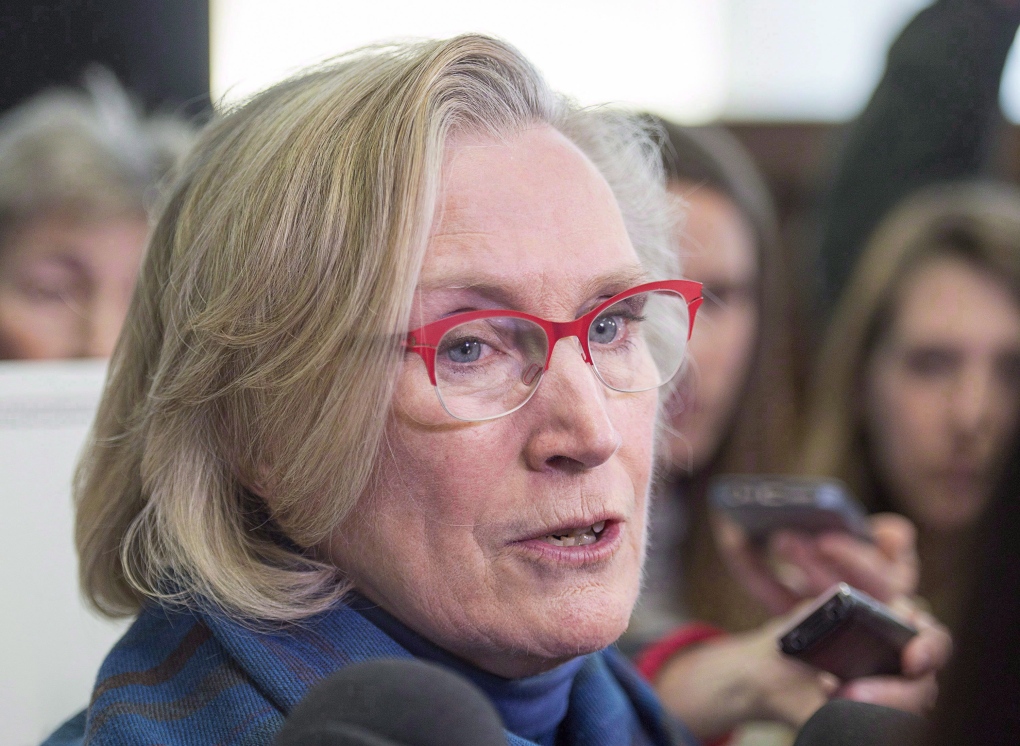 Federal Indigenous Affairs Minister Carolyn Bennett talks with reporters at a meeting of the Atlantic Policy Congress of First Nations Chiefs Secretariat in Halifax on Wednesday, in an April 27, 2016, file photo. THE CANADIAN PRESS/Andrew Vaughan

Freda Ens says she was a baby when her birth mother sold her for a bottle of beer.

The buyer was an unrelated man she would later call "Grandfather." Her earliest memories include being sexually molested by a number of men in his extended family.

"The one I knew was my dad, who went to jail, and then my grandfather."

Child sexual abuse is a disturbing reality in many of Canada's First Nations, Metis and Inuit communities, research is beginning to show.

Extensive interviews with social scientists, indigenous leaders and victims undertaken over the past few months by The Canadian Press show that the prevalence of sexual abuse in some communities is shockingly high. And only now are prominent indigenous leaders speaking out publicly for the first time about the need for communities to take a hard look.

It's a painful legacy connected to almost 120 years of government-sponsored, church-run residential schools, where aboriginal leaders say many native children were physically and sexually molested by clergy and other staff.

The abused in turn became abusers, creating a cycle of childhood sexual violation that has spread in ever-expanding ripples from one generation to the next.

Within indigenous society, the knowledge that children are being molested is often an open secret -- but one to which few are willing to give voice. Instead, they dance around the words, talking instead about child welfare, bullying, substance abuse, intergenerational trauma and community conflict.

While The Canadian Press has a policy of not identifying the victims of sexual assault, Ens agreed to be identified in this story as part of her ongoing efforts to raise awareness about the problem in aboriginal communities.

Community health nurse Shelly Michano, who lives and works in Biigtgong Nishnaabeg First Nation in northwestern Ontario, is on the front lines. She sees the consequences of sexual abuse among some residents, which can manifest as alcohol and drug abuse, chronic illness and suicide.

"I would say as First Nations people, you're hard-pressed to find anybody who doesn't have personal experience with this," said Michano.

"But it's never, ever quite on the surface. There's still lots and lots of stigma attached around that. And people don't necessarily openly speak about it still."

Finally, however, some aboriginal leaders are beginning to tear away the veil of secrecy, acknowledging that until the cycle of sexual abuse is brought to light, it will continue, threatening the well-being of future generations of Canada's First Peoples.

"Sexual abuse and incest is amongst our people, there's no question," Perry Bellegarde, national chief of the Assembly of First Nations, said in an interview.

"Have the courage to stand up and say: 'This is an issue and let's expose this to the light of day' ... that's the obligation of the community leadership and the communities themselves."

Sexual violation of children is an ugly fact of life worldwide, crossing all cultural, educational and socio-economic boundaries. Within Canada's overall population, research shows one in three girls and one in six boys experience an unwanted sexual act, with 30 to 40 per cent of victims abused by a family member.

But the prevalence of abuse among indigenous populations is difficult to assess accurately, experts say -- in part because of conflicting evidence, and also because the issue is so taboo within communities that it often remains shrouded in silence.

In a 2015 review of studies, published in the American Indian Culture and Research Journal, researchers say child sexual abuse is one of the major challenges facing indigenous communities across the continent, but data is often contradictory.

"Sometimes, reported incidence rates of CSA are comparable to those found in the general population. Other times, incidence is much higher," the authors write, concluding that research to determine the actual scope of the problem in Canada "is crucial."

In a 2014 Statistics Canada report, a higher proportion of aboriginal people reported experiencing some form of childhood physical and or sexual maltreatment before the age of 15, compared to their non-aboriginal counterparts. The study also noted it is possible that some of that abuse may have been a direct or indirect impact of residential schools.

In his work as the chairman of the Truth and Reconciliation Commission, which looked at the toll taken on survivors of residential schools, Sen. Murray Sinclair frequently heard gut-wrenching stories about sexual abuse and its devastating long-term effects. But he has no way to know the true extent of the problem.

"There is very little data, people are just not looking at it," Sinclair said.

"In our calls to action at the TRC, we said one of the things we lack in this country is an understanding of the magnitude of the problem and we need to look at better ways of gathering data so we can develop solutions that are properly focused."

Intergenerational sexual abuse is one key reason behind widespread substance abuse, a form of self-medication that helps both victims and perpetrators push down their emotional pain and bury their shame, health experts and aboriginal leaders say.

"If somebody's going through trauma or addicted to alcohol or drugs, there's a reason," said Jason Smallboy, deputy grand chief of the Nishnawbe Aski Nation, an organization representing 49 indigenous communities in northern Ontario.

"And probably 80 per cent, 90 per cent is related to sexual abuse."

The abuse has gone beyond residential school survivors, their children and grandchildren, said Sinclair.

"We are looking now at a situation where intergenerational children are abusing each other," he said. "Where members of street gangs are victimizing young girls, girls are going missing and being hauled into the sex trade in significant numbers."

The impact of childhood sexual abuse is expected to be a central issue raised when hearings begin early next year for the inquiry into missing and murdered aboriginal women. An interim report is due in November 2017.

"Throughout the (pre-inquiry) hearings on missing and murdered indigenous women and girls, we certainly found the incidents of child abuse and the association of child abuse was very, very frequent, in both the descriptions of the victims and in the perpetrators," said federal Indigenous Affairs Minister Carolyn Bennett.

One of the first steps in addressing sexual abuse is acknowledging its existence and saying it is not OK, said First Nations child advocate Cindy Blackstock.

"We have to make sure that our kids know that elders are the keepers of the traditions and no one in our community, including elders, ever has a right to harm a child," Blackstock said.

"We have to, as a group, embrace what hurts and we have to say to those young people that 'We know that's part of your experience and we are not going to deny it. We know it is there and we want to be there with you to do something about it."'

Ens, who knows her memories of abuse are far from unique after nearly three decades of working with victims of crime, said she hopes sharing her experiences will help others scarred by being sexually violated as children.

"My biggest message would be to tell someone, and that it is not your fault," she said.

"When we don't talk about it, we are just as guilty as the perpetrator. We are covering it up."